Our computer is more than a work tool, and it is also very useful for our leisure. One of the most used functions is the ability to listen to music. Sometimes we may miss the ability to read the lyrics of the songs we are listening to. For this we can use players that have this capacity, as well as use programs that offer this possibility either to listen to music from Spotify or from the Media Player.

Reading the lyrics of the songs that sound is one of the functions that are most missed by music lovers, and it is not a possibility that we can find by default among the most popular players, so we will have to take hand of other applications if we want to enjoy this possibility. Many of these programs are responsible for displaying the lyrics found in the metadata of the songs. In other cases, they will be in charge of obtaining the lyrics from specialized websites such as lyrics.wikia.com, musixmatch.com, azlyrics.com, lyricsmania.com, lyrics.com , among others.

Next, we are going to see some players with music that among their functions have the possibility of playing the songs with the lyrics, being compatible with different audio formats, so that we do not have problems playing our favorite music while we read the lyrics.

We are facing a free music player which has among its functions the possibility of reading the synchronized lyrics when playing the song tracks. It has a separate letter bar for the desktop that can be moved anywhere on the screen. It also has the possibility of loading an LRC file (file containing the lyrics) and being able to synchronize it with the playback of the audio track. It has several options to configure the preferences of the letters. It allows us to configure the font of the lyrics, the color, the transparency effect and prioritize the lyrics data of the ID3 tags, as well as edit any lyrics of a song. 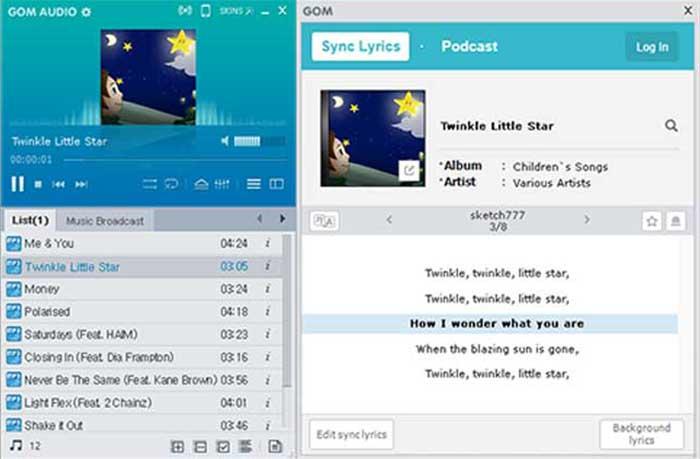 As a player, it provides us with interesting features such as the ability to listen to Internet radio, an equalizer, support for playlists, interchangeable skins and support for the most popular music formats. We can download it for free from this link .

We are now talking about a program specially designed to label songs and keep the music on our PC organized, although it also works as a player allowing us to read the lyrics of the songs. We can read the tagged lyrics within the music file or download the lyrics online. It also allows us to delete, edit or export lyrics to any local file. 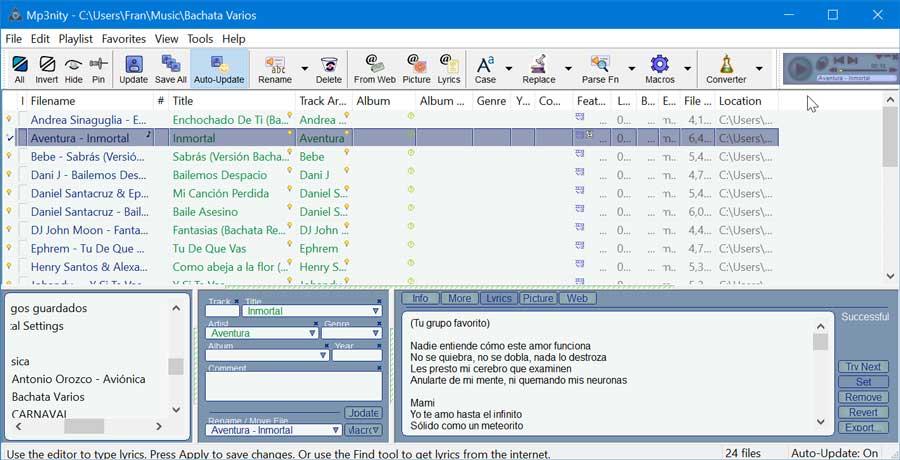 It works well both as a music player, tag editor, lyrics and album art downloader, as well as a music organizer, so it can be talked about as an all-in-one tool that can be very useful for us. In addition, it is compatible with several audio playlists and allows us to generate our own playlists.

Another free music player for Windows that has the ability to read the lyrics of the songs that sound from a dedicated section within its interface. It also allows us to enable a lyrics bar for the desktop so that we can follow the lyrics of any song in the background and it has a distraction-free mode. It also has a built-in lyrics editor and features to search for lyrics, recommend lyrics, or report wrong lyrics. 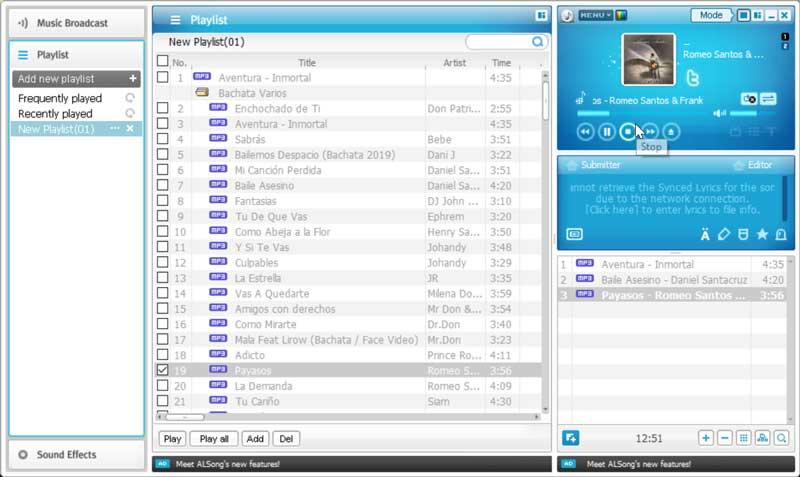 As a player it works perfectly offering support for the most popular audio formats. It also has an equalizer, radio, album creator, sound effects, and playlist support.

If we want to use AlSong we can download it for free from here .

If we use Windows Media Player or other music players we can use these plugins to see the lyrics of the songs that are playing, which can be downloaded for free.

MiniLyris, the most popular complement to read letters

We are talking about a plugin that is compatible with the most popular music players on the market such as VLC, BSPlaer, Windows Media Player, iTunes, etc. When installed it is used as a complement to be able to read the letters that are sounding. Displays the letters moving on the screen as they sound. It also allows you to enable floating lyrics which will allow us to work with other applications while the song and lyrics are playing. 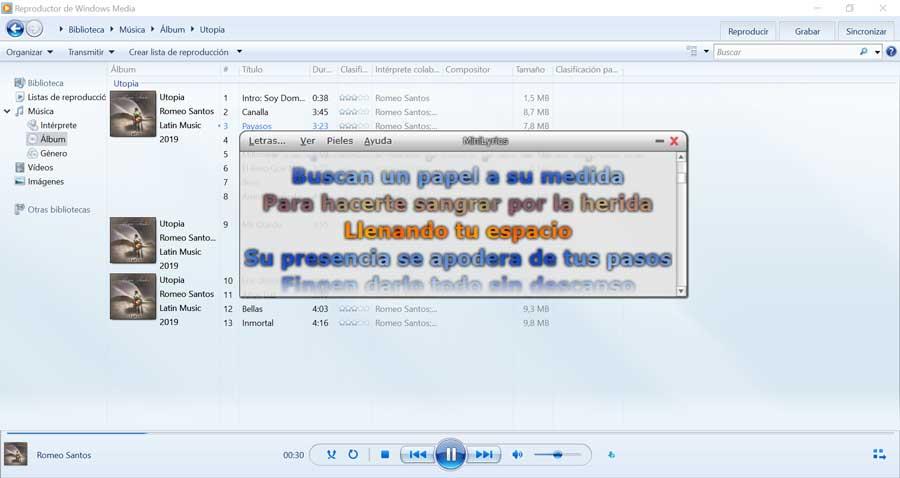 This plugin has its own interface from where we can customize the display of the letters such as font, color, style or transition. In addition, we can search for lyrics of a song, load lyrics, edit and rate them. In order to use this plugin with a compatible audio player, we only need to provide the application file path.

This add-on is in charge of finding the lyrics of any song that we are going to play from our computer, by connecting to the iTunes or Windows Media Player libraries. From them it obtains the data that we can download so that they are reproduced while we listen to them. The add-on is responsible for storing the downloaded lyrics locally so it will not be necessary to repeat the action once downloaded. If we use iTunes or Windows Media Player it is an interesting option to be able to read the lyrics of the songs that sound.

For users who prefer to listen to their favorite music in streaming through Spotify, you can also use the popular program to view the lyrics while the songs are playing. This is possible by installing complementary applications that will be in charge of showing us the lyrics of the songs that sound on the famous music platform.

It is a free application that we download from the Microsoft Store and that offers compatibility with Spotify. We simply have to run it so that it synchronizes with the popular streaming music platform. Once we play the songs, it will show the lyrics in its own interface. It also has Play and Pause buttons, as well as a timeline to move forward and backward. In addition, it has a function that allows us to improve the synchronization of the lyrics or improve it manually in case it is not reproduced correctly. Its database is quite extensive and it also offers compatibility with iTunes and Windows Media.

To use Musixmatch, just download it for free from the Microsoft Store. 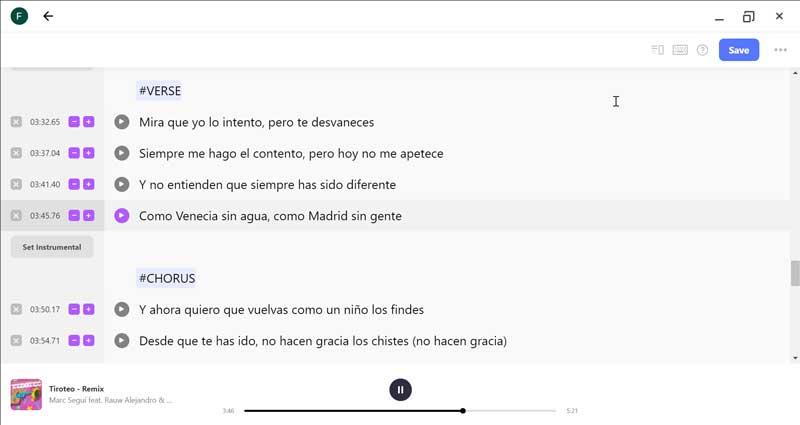 Versefy, compatible with the desktop version of Spotify

We are talking about an application designed to be able to read the lyrics of the songs that we play on Spotify, exclusively in its desktop version. In its interface we find some interesting features such as the possibility of setting a white or dark background, as well as activating a text display enhancement . It is also possible to zoom on the letter and establish a focus mode that allows us to eliminate any element related to the user interface so that we can focus on the letter without distractions.

We can download Versefy for free from the Windows Store. 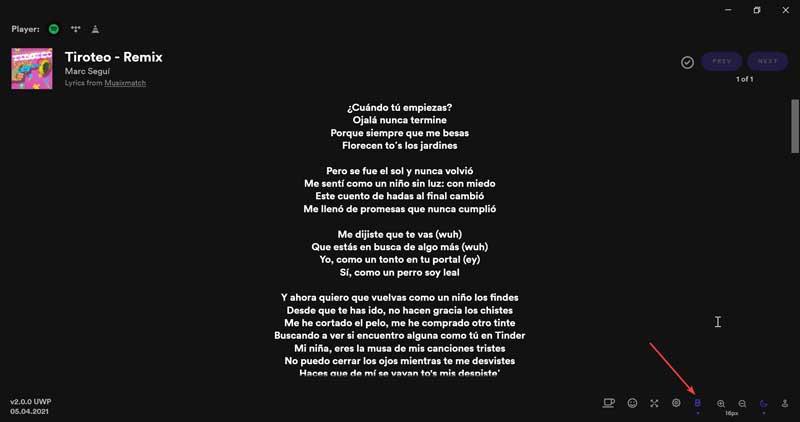 What program to read song lyrics to use?

When choosing a program with which to read the lyrics of the songs while they sound, we must consider what type of application we need. Based on this, we can choose a player that has this function, install an add-on for our favorite player or choose an application that offers compatibility with Spotify.

If we have no problem using another player, GOM Audio is surely the ideal option since it has everything you need in a single application. If we do not mind installing a plugin, MiniLyrics , it may be the preferred option, given the large number of players with which it is compatible.