Sometimes it’s easy to forget where we come from when we talk about the PC gaming industry, especially while we have NVIDIA and AMD with all the prominence of gaming hardware in recent times. But in reality, there is a lot we can talk about if we go back just 25 years in the history of GPUs, with colossal leaps in power and performance that explain why we are where we are today. In this article we are going to look back to review the best graphics cards in history , or at least the most iconic in the industry.

As they say, before you run you have to walk, and like any young child who runs like a deer today, there have been many attempts in the industry to achieve good performance at 800 x 600 resolution before anyone could dream of the 4K resolution that we have today (we are talking about 480,000 pixels back then, when 4K resolution has 8,294,400 pixels, by the way). The best graphics cards in history

You would be surprised how many functions that are common today in modern GPUs were first introduced at the dawn of history, such as SLI technology, something that today we take as natural but that in the 90s played a critical role to achieve the best gaming performance.

Let’s start from the beginning, when graphics cards didn’t even have active heatsinks. 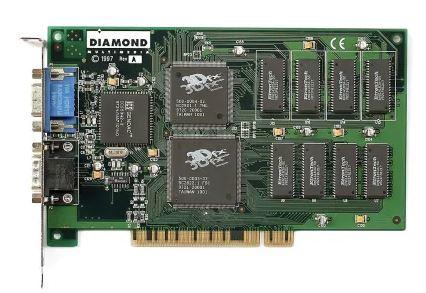 In March 1996 the 3dfx manufacturer launched what would be the first of a family of graphics cards that changed the rules of the game in those days, the Voodoo series (highlighting the emblematic Voodoo Banshee model). With an operating speed of just 50 MHz and equipped with 4/6 MB of VRAM in total, it was the best graphics card of the moment. It could easily handle 800 x 600 pixel resolutions, and despite its limitations it put 3dfx on the path to fame in PC gaming, eventually ending up in NVIDIA’s pocket. 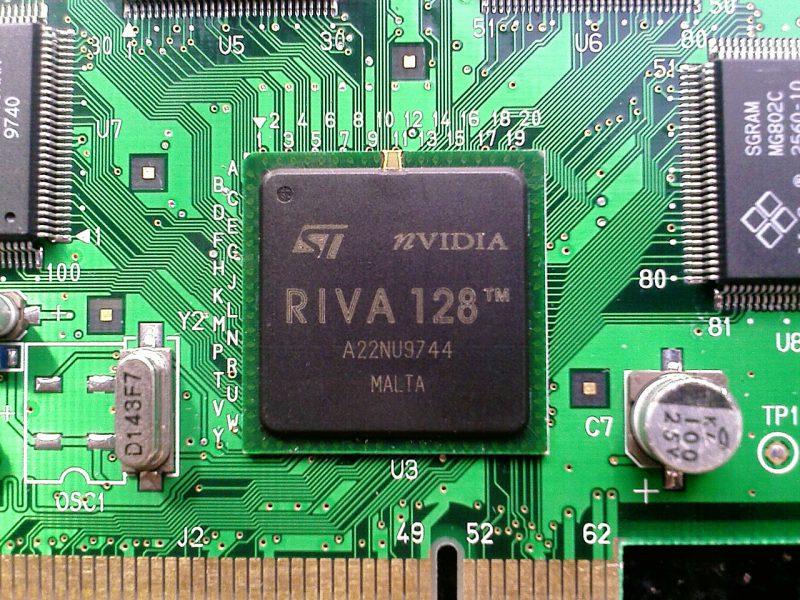 A chipset company named NVIDIA would soon offer real competition to 3dfx with its NVIDIA Riva 128 or NV3. The name meant “Animation and Interactive Video in Real Time” and integrated 2D and 3D acceleration on a single chip for ease of use. It was a surprisingly good graph that doubled the initial specification of the Voodoo, since it worked at 100 MHz and had 4 MB of SGRAM. It was the first graphics to gain traction in the graphics card market for NVIDIA. 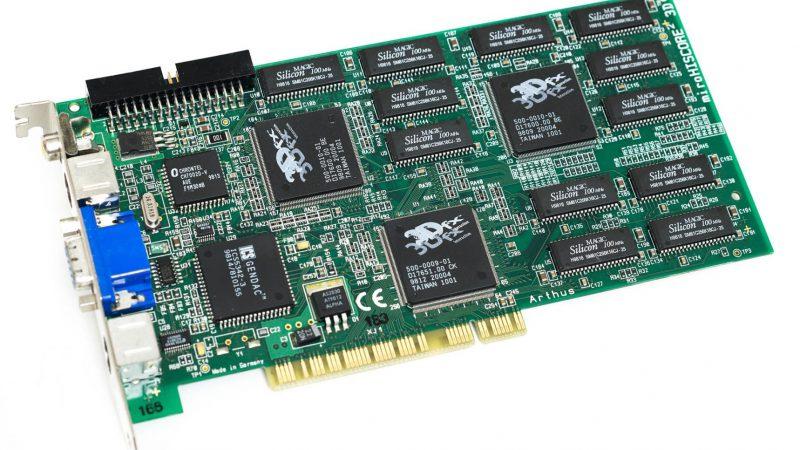 The best graphics cards of those times were known as “3D accelerators”, and so 3dfx introduced in 1998 the second version of its Voodoo GPUs to compete with the Riva from NVIDIA. It is a heterogeneous mix of chips, as you can see in the image above, which featured a clock running at 90 MHz with 8/12 MB of RAM and compatible with SLI for the first time. It supported resolutions up to 1024 x 768 pixels. 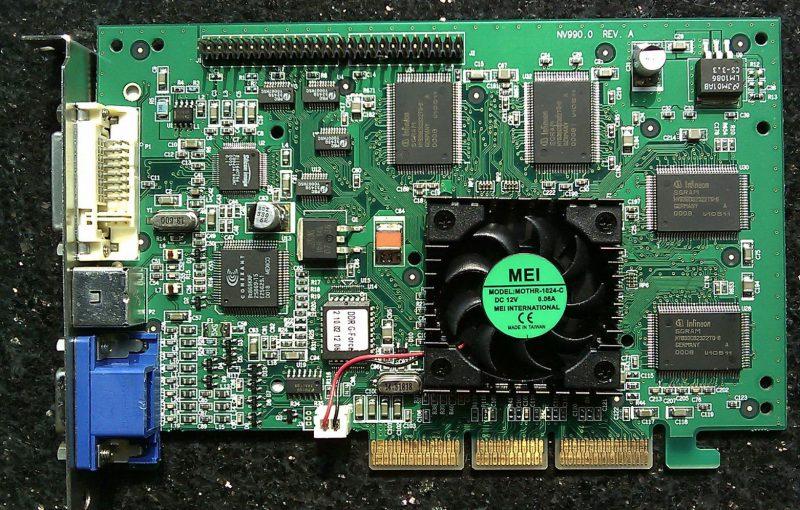 The first graphics card to carry the name “GeForce” that is still used today came in 1999 under the name GeForce 256, and is considered “the first GPU in the world”, since as we have mentioned before, it considered 3D accelerators. This is not merely due to NVIDIA’s clever marketing campaign, but was also the first to integrate everything on a single chip which, as can be seen in the image above, was also the first to have active cooling.

This graphics card worked at 120 MHz and had 32 MB of DDR memory (for the high-end variant), and it was also compatible with DirectX 7, which gave it a very long useful life compared to the previous ones. This, coinciding with the release of some of the best PC titles ever, made this one of the best graphics cards in history, or at least one of the most iconic and relevant. 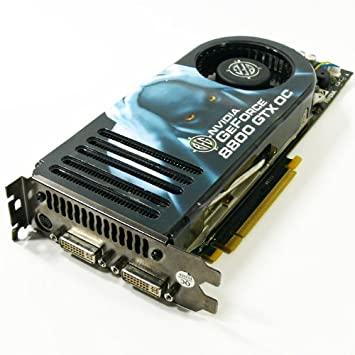 We come to 2006 when NVIDIA launched the famous GeForce 8800 GTX. With 128 Tesla architecture cores and 768 MB of GDDR3 memory, this graphics card has ruled the graphics card market since its launch, and stayed around for quite some time thanks to a unified shader model introduced with the architecture and Direct3D 10. It became famous. for being the first to be able to run Crysis with a decent level of performance. 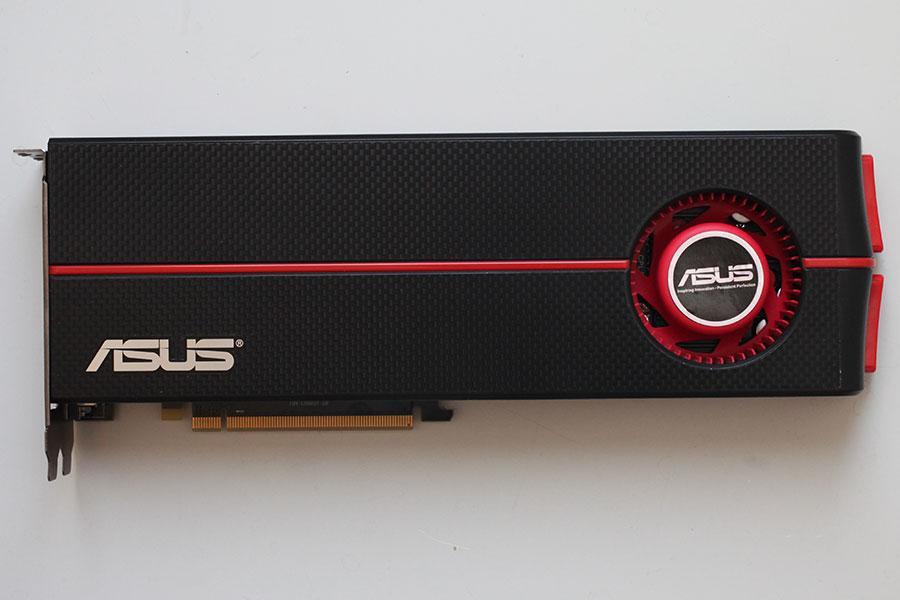 Many of you will wonder what ATI (AMD) was doing all this time. Semiconductor company ATI was busy building lots of custom console chips in the 90s and early 2000s, and made some great self-designed GPUs like the X1900 XTX. Later, in 2006, it was purchased by AMD and the Radeon brand was incorporated under AMD’s embrace. After the fiascos of the HD 2000 and HD 3000 series, the HD 4870 and 4850 were among the best graphics cards on the market, but the one that made the biggest impact was the Radeon HD 5970.

This graphics card was a Cypress GPU, with 1024 MB of memory with a considerable 256-bit bus … multiplied by two. Yes, this graphics card had a dual GPU and was doubly good due to the double count of internal components, which allowed it to dominate the PC gaming landscape for several years.

This “tradition” of sticking two GPUs on a single graphics card continued into the NVIDIA Radeon R9 295X2 and Titan Z, but once support for multiple GPUs began to wane, single-GPU graphics became the factor. predominantly. Also, since the arrival of DirectX 12, support for muilti GPUs is in the doldrums and in the hands of developers, so it’s probably destined to disappear.

NVIDIA released the original GTX Titan back in 2013, and at the time it was intended to put it on top of gaming performance. And it could be said that it was the first enthusiastic category consumer graphics card to be launched on the market, although it was later followed by many more such as the current GTX 1080 Ti or RTX 2080 Ti.

The GTX Titan had 2,688 CUDA cores and could run at up to 876 MHz. With no less than 6 GB of GDDR5 RAM and a 384-bit bus, it was able to keep any game at peak performance for a long time. However, at that time it also became the most expensive graphics card in history. 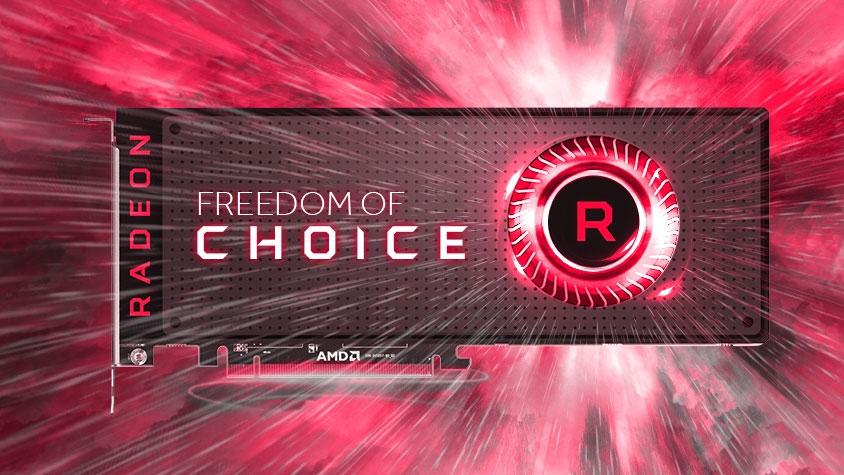 We can’t finish an article about the most iconic graphics cards in history without mentioning the Radeon RX 580, graphics that are still sold today even though they were released in 2017. This Polaris architecture GPU was very affordable and set a precedent for gaming at 1080p resolution, becoming the epitome of AMD’s philosophy: best performance at the best price.

The RX 580s have done more for low-budget gamers than any other PC graphics card. It was so good for the price that it cost that it was even widely used to mine cryptocurrencies, and it became the standard by which all subsequent generation AMD and NVIDIA GPUs would be compared.