Artificial Intelligence is a modern system that is increasingly implemented in many systems. Thanks to this mechanism, as a result of putting a large amount of information into a database, these machines can work on their own and perform tasks autonomously, without the need for it to be controlled by a person. In general, these Artificial Intelligence systems are quite used in the military field by different countries to improve their attack and defense systems. However, in robotics it is also used a lot, as in the case of this new robot that can already be reserved.

With the name of XGO-Mini , this little four-legged robot will be able to interact with us without any problem. The robot will be able to react both with our voice and if we show it images. It is made of metal and weighs less than a kilo. Its battery has an autonomy of 2500 milliamps and an SD card of up to 4GB capacity can be inserted.

A robot that has multiple functions

It can adopt different positions thanks to its different mechanisms and axes from which it is made. In total you can adopt up to 12 different degrees of posture, either forward, backward or sideways.

It also has a series of motors, sensors, control circuits and even downshifts that allow you to increase or decrease the rate of your movement at all times.

This robot has no problem in raising smooth surfaces without problem or lowering them, since it will be able to maintain balance without problem. Even if it receives some kind of unexpected side blow, the robot continues on its way as normal. Its movement is reminiscent of a four-legged animal. 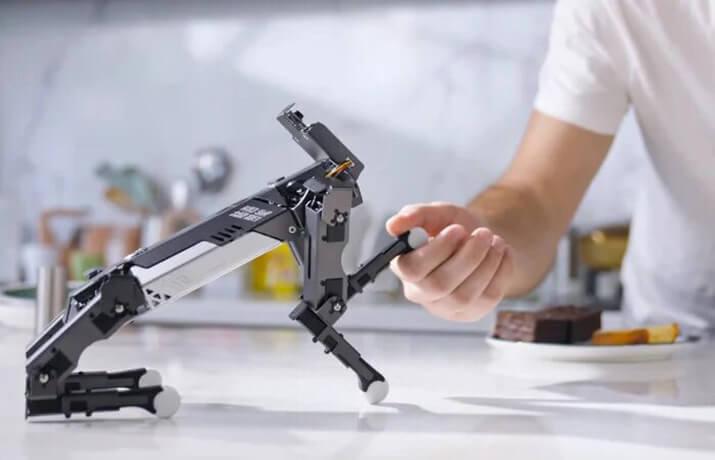 It can do a wide variety of things: detection and tracking of your face, facial recognition, tracking our hands , classifying images or recognizing road signs. By power, it can even give you the paw as if it were a dog.

But it does not stop there alone, since it can also guess which finger we are using, face mask detection, recognition of different colors, recognize shapes such as circles, rectangles or lines or even scan QR codes . All this is possible thanks to its Artificial Intelligence system.

You can book now

In addition, the robot also has an application for mobile devices with which we can order it to place itself in the position we want, among other things.

You can contribute to this project with the amount you want, from one euro to more. In addition, if you are interested in acquiring this robot, there are several offers available: the cheapest is for 169 euros, but there are other more expensive ones (211 and 507 euros) that will allow us to obtain discounts compared to the recommended retail price, which is much higher compared to the prices for which we can acquire the robot.

In the event that this project goes ahead and the necessary financing is obtained, it is estimated that shipments would be made in November of this year more or less for all those who buy it. It will not matter from where you make your purchase since shipments will be made anywhere in the world.