Today we can find a lot of programs to edit videos. However, if we really want to edit them like a pro, add effects and get a perfect finish, the thing changes, and the list is greatly reduced. In the end, most users looking for a professional video editing software have to choose between two: Adobe Premiere Pro vs Final Cut Pro X.

It is impossible to say that one of the two is better than the other. Each has its own advantages and disadvantages. And once we get used to using one of them and master all its features, they offer us totally professional results.

However, if you are doubtful if you start with one or the other, then we will see in depth what each of these publishers offers and which one we should choose.

When we talk about editing photos, the first program that comes to mind is Photoshop, of course. This is the most complete professional nonlinear video editing software we can find. However, Adobe’s shadow goes far beyond photo editing, and one of the points where I wasn’t going to miss the opportunity to show its worth is in video editing. Adobe Premiere is the most complete professional video editor we can find. The company wants this to be a video editor for all users, both those without experience who edit videos on a personal level and for those who need to edit video in full resolution and with a professional finish.

This company is betting a lot on AI, and in the latest versions of Premiere Pro we can find many points of the program in which this artificial intelligence helps us achieve the best possible results.

Adobe’s non-linear video editing software offers users several advantages that other alternatives cannot offer. The first, and very important, is that although it uses an interface similar to that of other programs of this company, Adobe has achieved an interface that adapts without problem to the needs of all users. In addition, we can find several workspaces, spaces that we can customize and even create from scratch. In this way it is not the user who has to adapt his work methodology to the program, but the program who adapts to the user. The learning curve of this program is much simpler than that of other similar programs.

Another of the most sources of this software is the ease with which it connects and works with other Adobe programs. The most important are his compositions synchronized with After Effects. In addition to adding effects to videos, After Effects is a very popular tool when creating titles, transitions or entrails, for example. The libraries colors and even import content from Photoshop and Illustrator is also one of the main advantages of this software.

Adobe is always up to date in terms of technology, and therefore its software is always compatible with the latest codecs, formats or resolutions. In addition, its subscription model allows us to pay a certain amount per month and always have the latest version of the program without paying renewals.

Whenever we go to edit video it is advisable to have a high-end computer. This should have a lot of RAM (preferably 32 GB), a processor of the highest range (i7, for example, in the case of Intel), an SSD and a good graphics card to speed up rendering. However, with Adobe Premiere this recommendation becomes a requirement. And this software consumes many, but many resources.

If we have a mid-range computer, or less, the safest is that, although the program will work, working with it will be desperate. It will take a long time to render the content, and any small change will involve a new rendering. Something that many times we cannot allow.

In addition, although Adobe software has improved a lot, Premiere is one of the most blocked programs. It is vital to activate the auto-save of the data every 5 minutes if we do not want to lose hours of work due to an unexpected closure or blocking. This is something that many users have complained about but that does not end up disappearing.

Relying on other Adobe programs for certain tasks can also be seen as inconvenient. Why can’t I, for example, add effects from Premiere Pro and have to rely on After Effects? Why do I have to edit the audio with Audacious? In addition, the connection bridge between programs does not always work as it should or apply real-time changes between programs.

Final Cut Pro X, the reason for many to buy a Mac

Final Cut Pro X is Apple’s non-linear video editor. This editing program uses the Apple Metal engine to offer its users the best performance and maximum stability for all types of projects. Apple wants to stand up to Adobe and its entire suite making this the only video editor for everything editors need, from start to finish. 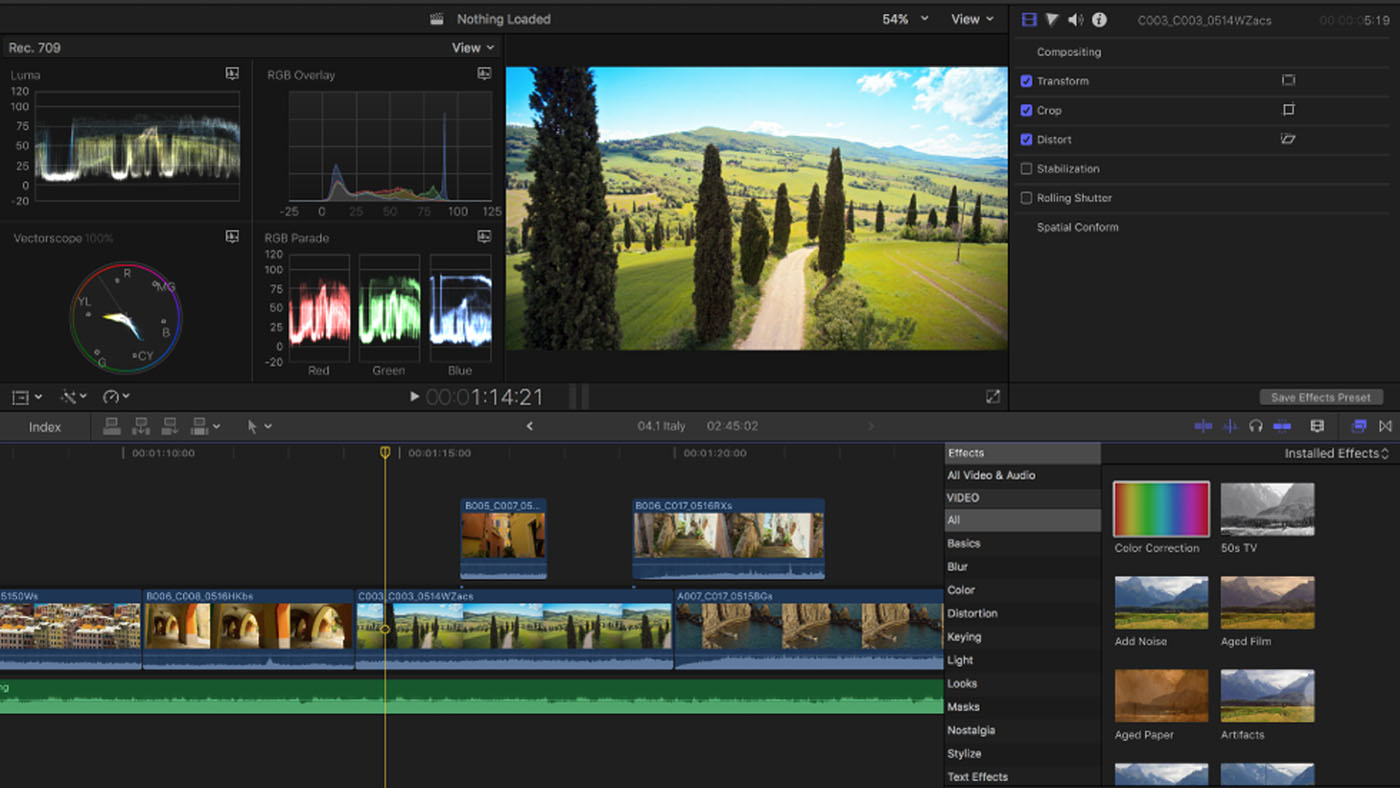 In addition to its new video editing engine with magnetic timeline (so there are no black spaces), this software offers us a series of tools to work with it in the most comfortable way possible. For example, we have content organization tools according to tags and categories, and a complete multichannel audio editor to optimize the audio of our creations. In addition, Apple offers us the function of Motion Graphics for creating professional titles and effects as an alternative to After Effects. And thanks to Compressor, video encoding achieves an exceptional result.

One of the advantages of this video editing software is that it is programmed exclusively to work on macOS, with specific hardware. This gives you maximum performance when editing all kinds of videos, even in 4K and in HEVC format, and also the characteristic stability of this company.

Over the years, Final Cut Pro X has gained great prestige, to the point that many users buy a Mac to use this program to edit their videos. After all, it is one of Apple’s sales techniques.

Unlike other video editing programs (such as Adobe) that work under subscription, Final Cut Pro X can be purchased from the Apple App Store for $ 299.99. A single payment that will allow us to use the program unlimitedly. In addition, it represents an important reduction compared to version 7 of Final Cut, which cost a thousand dollars.

Another advantage of this video editing program is that it allows you to edit and compose video from multiple cameras more easily than other alternatives. In addition, the use of chroma is better controlled and the post-processing results are more professional.

The biggest drawback of this software is that it is only available for macOS. If we have a Windows computer, we will not be able to use it. And if we choose to virtualize macOS or configure a hackintosh, it won’t work as well as on an original Mac. This already leaves out many users who need a good video editor but do not want to invest in an Apple computer.

Although Apple always creates intuitive and easy-to-use products, there are many professionals who find the Final Cut Pro X interface much more complicated than other alternatives, such as Adobe Premiere Pro. Since a professional will spend many hours in front of this interface, it is best that you feel as comfortable as possible with her. The interface of this software is not customizable or adaptive.

Final Cut Pro X is a quite controversial version. This replaces the previous version of the program, called “Final Cut Pro”, and is totally incompatible with it. In addition, Apple changed the approach to editing in this version, something that users didn’t like.

Final Cut Pro X or Adobe Premiere Pro, which one to choose?

Each program has its own advantages and disadvantages. The fact that for some users it may be good, it may not be for others who have other needs. Just as if we have been familiar with an interface for some time, suddenly changing to another without need can mean a waste of time and a decline in professionalism until the other program is mastered.

Now, if we have never started editing videos with either program and we have to start with one of them, which one to choose?

If we are Windows users the thing is clear. Since Apple software is not available for a Windows computer, Adobe Premiere is the only alternative we have left. Unless we don’t mind investing in a Mac to use Final Cut.

If we already have a Mac, or we are going to buy it, then we can choose either one, since both are available for macOS. Many professionals agree on one thing. And if we are only going to edit relatively small videos and what we need is very fast, Final Cut Pro X is far superior in this aspect to Premiere.

If on the contrary we want to have greater versatility when creating effects, better production of videos and manage very large videos without problems, then it is better to choose Adobe Premiere.

Finally, price is another factor to consider. While Final Cut Pro X costs $ 299.99 perpetual license, Adobe Premiere Pro is priced at 24.19 euros per month. And if we want to have at our disposal all Adobe programs, the price amounts to 60.49 euros per month. In less than a year and a half, Final Cut will be cheaper than Premiere.