The games for the PC platform do not stop growing, both in quantity and in use, as many check daily. But also many continue to opt for the use of consoles such as Sony’s PlayStation or Microsoft’s Xbox in its different versions.

Of course, for those who really like to play, on many occasions they make use of different platforms, games and devices, depending on the moment. This on certain occasions can bring us some important advantages, as we will show you below. In fact, in these same lines we are going to show you how to install and use the controller of your beloved Microsoft Xbox , on a Windows 10 PC. This is something that will be more useful to us now than ever, more for those who have an Xbox Game Pass Ultimate subscription. And as some of you may know, this allows us to make use of a huge number of titles both on the console itself and on the Windows 10 PC. In fact, it is a type of subscription that currently does not stop growing in terms of associated due to everything it offers us. Well, it may be the case that we enjoy the same specific title on both platforms, for which what we will show you will be useful.

In any case, whether this is the case or not, the fact of being able to use the Xbox controller itself on the Windows PC, will probably be very useful to many of you. For all these reasons, we are going to show you the way to do this in the simplest way.

First steps to connect the Xbox controller in Windows

Well, the first thing you should know at this point is that in order to make Windows 10 detect the command as such, this is something we achieved from the System Settings application. We access it through the Win + I key combination to open the new window. Therefore, in this case we have to pay special attention to the section called Devices. 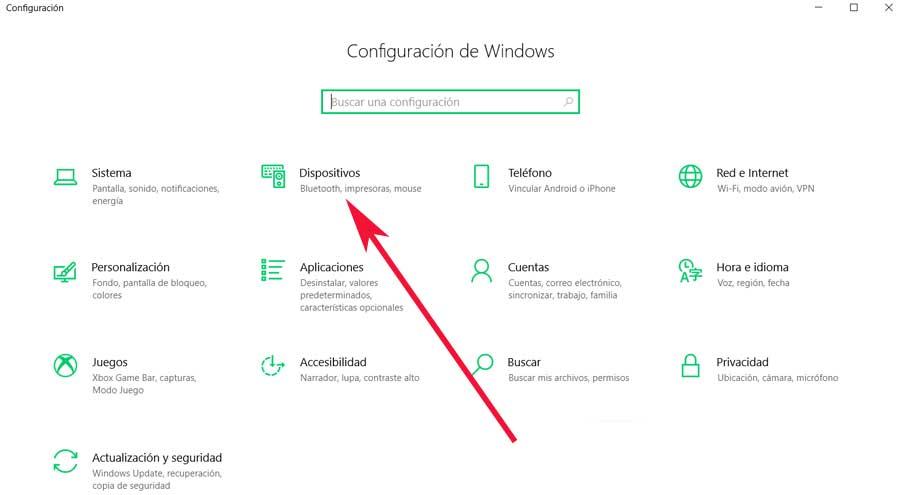 Of course, first of all we must take into account and know if our Xbox controller is compatible with Bluetooth or not. Therefore, it is important to know that the controls of the first Xbox One do not have Bluetooth connectivity. On the contrary, in the event that we have an Xbox One S or an Xbox One X , we will have no problem. Thus, once we are sure that the device has Bluetooth, the first thing we will do is turn on the remote control as such so that the PC can detect it through the aforementioned connectivity.

Connect the Xbox controller with the PC via Bluetooth

But not only will we have to start the remote so that the central button lights up, but at the same time we must press the pairing button. Saying that it is located at the top rear of the remote is a small button. Therefore, after locating it, press them for a few seconds and when the Xbox button light blinks fast, it will already be in pairing mode.

Then it will be when we place ourselves in the mentioned Configuration / Devices section. In Bluetooth and other devices in the left panel, click on Add Bluetooth or another device. 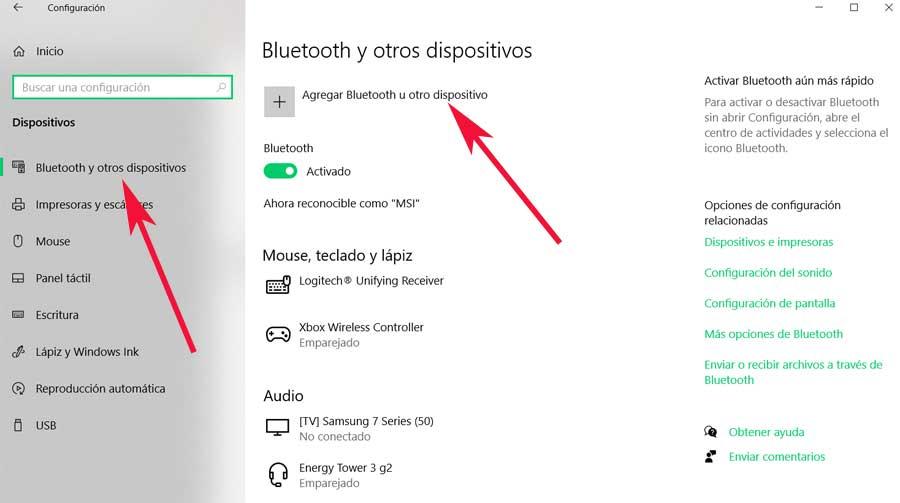 After clicking on the Bluetooth section of the following window, the system itself will start scanning the environment for products with this connectivity. Typically, you will see several of them that will show us on the screen, but the one that interests us is the so-called Xbox Wireless Controler . Therefore we will only have to select it so that it can be paired with the PC. 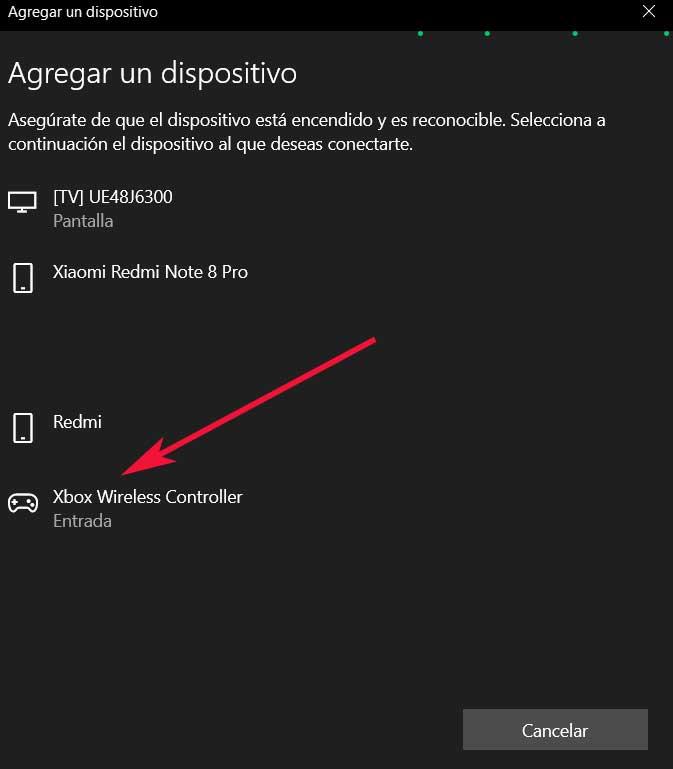 Keep in mind that this is a process that can take a few seconds, after which the command will already appear in Windows as Paired.

With everything and with it, it can be the unlikely case that our team or system is not able to detect the product of the console we are talking about. That is why, if necessary, we can always use an alternative solution. And is that Microsoft itself, in its official catalog of Windows Update , does not offer the drivers we need to achieve this.

Thus, we will only have to access this link from our favorite browser to download the drivers to the local computer.

How to configure and calibrate the controller in Windows

Once the remote control is already working, detected and synchronized via Bluetooth in Windows, we will have to calibrate it and fine-tune it. For this, one of the most effective solutions that we can use right now is the Xbox Accessories application that you can download from the official Windows 10 store.

In the event that we do not have the controller synchronized, the first thing that the app will ask us is that we start it in Windows . For this, it is enough that we carry out the steps described above. Once this is done and everything works correctly, a photo of the device itself will appear in Xbox Accessories. 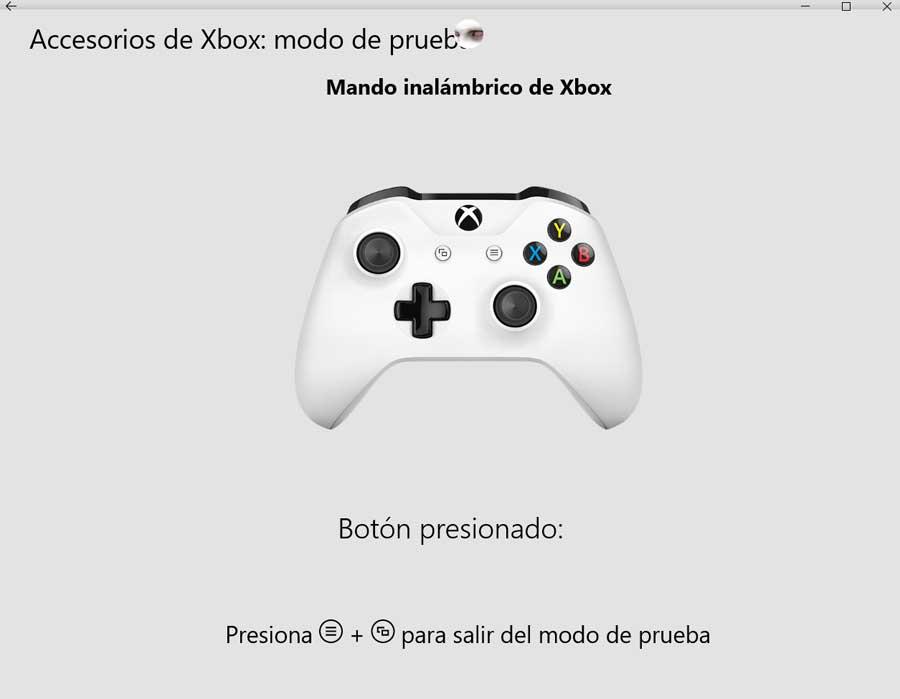 Once we access this section that we discussed, the first thing we will do is assign a name to the configuration profile that we are going to create from the New profile button. 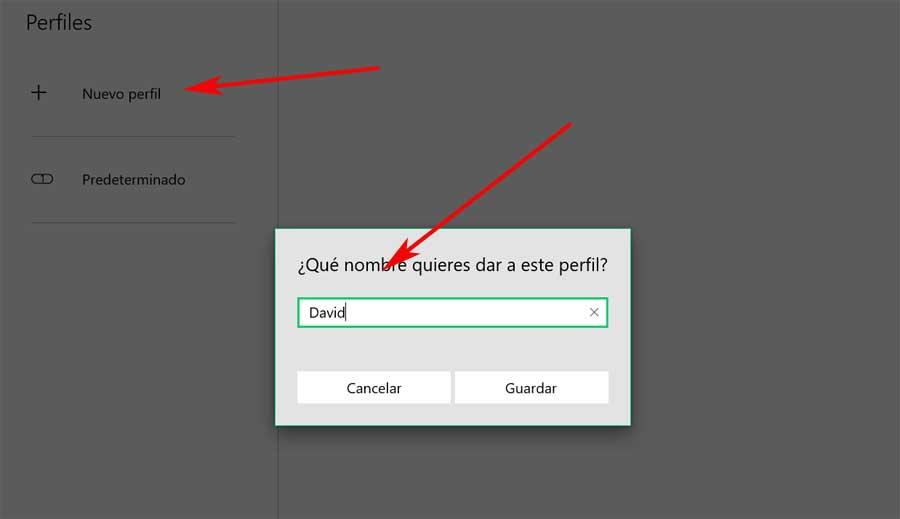 Use custom profiles on controller

This will give way to what really interests us in this case, which is the product configuration window. This is a very simple program to use that actually allows us to customize the behavior of the elements of the Xbox controller. Among these we find the possibility of reassigning the buttons, exchanging the sticks , inverting their axes or exchanging the triggers . 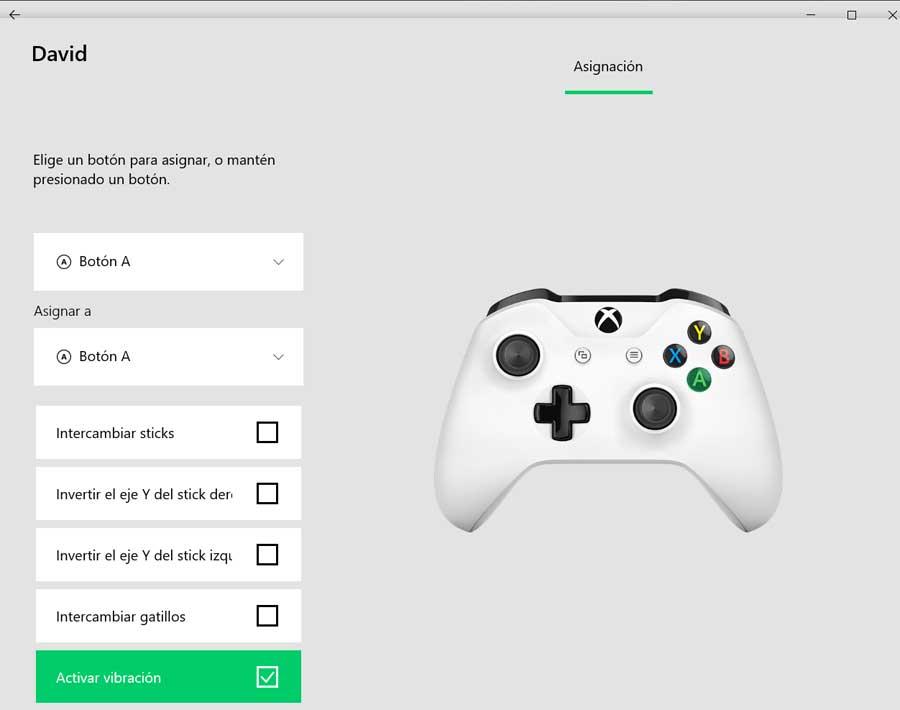 At this point, we must think that as we mentioned before, we can create various usage profiles. In this way, depending on the person who is going to use it, or the game with which we are going to work, we can switch between these.