Over time, Microsoft has not stopped including new functions for 1 of its flagship products, Windows 10. This is the case that we want to talk about along these lines, for example. Specifically, we are going to talk about a very useful functionality that not everyone knows, the Game Bar .

It is logical to think that the software giant, over the years, tries to make its operating system more powerful and useful for everyone. In this way, the software adapts to all kinds of uses and users, from the most professional to the home or student. What’s more, even over time we have seen that it adapts to the most demanding players . And is that the PC platform games has not stopped growing in recent times. 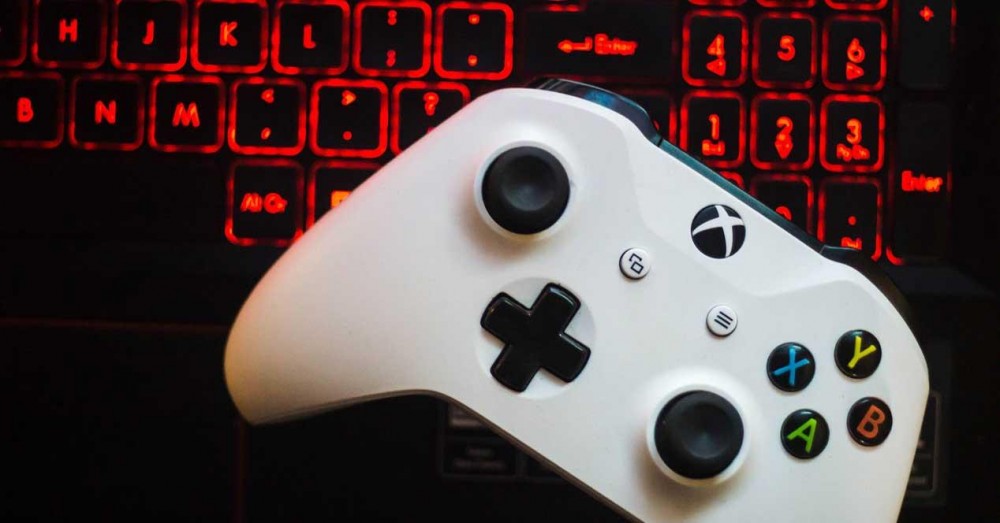 Hence, those of Redmond have focused part of their efforts to improve the experience when playing Windows 10, as we will see. In order to achieve this that we are commenting on, the firm puts at our disposal a series of specific functions, as is the case in which we will focus now. In fact we are going to talk about a functionality that not everyone knows, as we mentioned, but that can be very striking.

How to open the Game Bar

We already mentioned before that we are going to focus on the so-called Windows 10 Game Bar. This is an element that precisely focuses on offering us a series of specific functions for games in the Microsoft operating system . At first the function as such is hidden, but we can start it quickly and easily. To say that in addition to the so-called Game Mode , a function that optimizes the system every time we run a video game, we also find this other element. We could say that the aforementioned Game Bar is actually an information panel that hides a multitude of features.

But of course, for all this the first thing we have to know is how to access this that we are commenting on. In the event that we want to open the Game Bar directly and quickly, we only have to use the Win + G key combination. At that moment we find a series of small windows on the screen that are distributed throughout it. And it is that something we should know is that this is an element that in turn puts at our disposal a series of useful widgets. 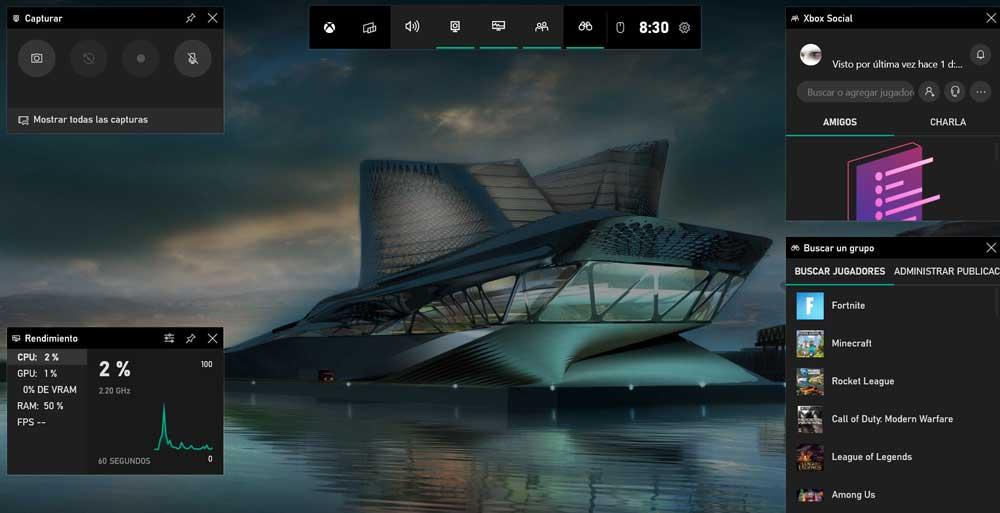 In fact we find an overlay screen that we can launch at any time. This can be very useful, for example, while we play. Thanks to it, we can have access to all kinds of additional functions and information about the PC hardware, such as social and capture functions.

As we told you, this is an element that in addition to having a main bar, in turn by our disposition a series of additional widgets. Some of them appear by default when we use the key combination , others we can activate ourselves. To see all the elements of this type that we have at our disposal, we only have to click on the button called Widgets Menu on the main bar of the function we are talking about.

At that moment, a list appears with all the elements of this type that we have at hand. The only thing we must bear in mind is that when clicking anywhere else they disappear by default. But of course we always have the possibility of fixing them so that they are visible at all times. To do this, once we have it in view, we click on the pushpin-shaped button that is located in the upper right corner of each one.

Very useful widgets that we can use in Windows 10

There are several elements of this type that can be of enormous use to us. Of course, as we mentioned before, many of them focus on offering us additional functions when playing on a Windows 10 PC. Perhaps one of the most interesting widgets that we can find here, is the one that helps us measure performance of the team. This shows us in real time the consumption of RAM and CPU for example while we play. As you can imagine, this can be very useful for us.

At the same time On the other hand we find another element of this type, but that will help us to make captures, both fixed and in motion. That is, thanks to this widget, we can carry out both image and video captures while playing on Windows. But that’s not all, since in this same section we find another element to interact with other users, access our Xbox achievements, open our Spotify account, etc.

Say that in the game bar itself we find shortcuts to some of the most important. However, in order to see them all, we will do so through the button mentioned above.

Due to the enormous utility that this bar can provide us with in the Redmond operating system, it offers us some interesting configuration options. To begin, we will tell you that for them we access from the button with the shape of a cogwheel that is located to the right of the bar itself. Once we click on it, on the screen we will see that a new window appears divided into two sections.

To the left of it, we find different categories referring to the Game Bar itself. Also in the right panel we will see the different configurable options for each of these categories. 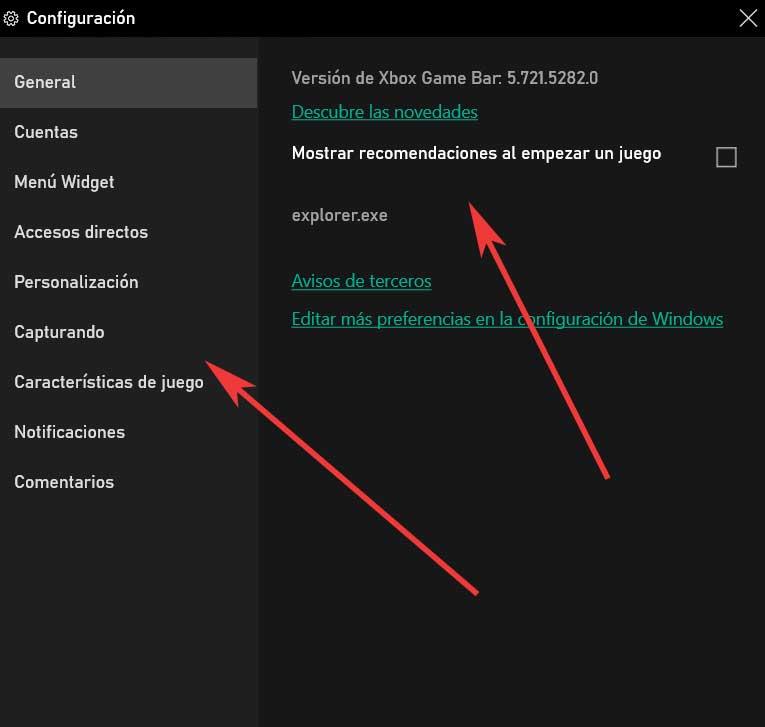 For example, from the accounts section we can associate our users of social networks and various Internet platforms, to the Game Bar itself. At the same time from this same window, we have the possibility to customize the widget menu or assign a series of keyboard shortcuts to the most interesting functions here. We can also customize the appearance of the bar itself, the capture mode that we discussed before, through the notification system. 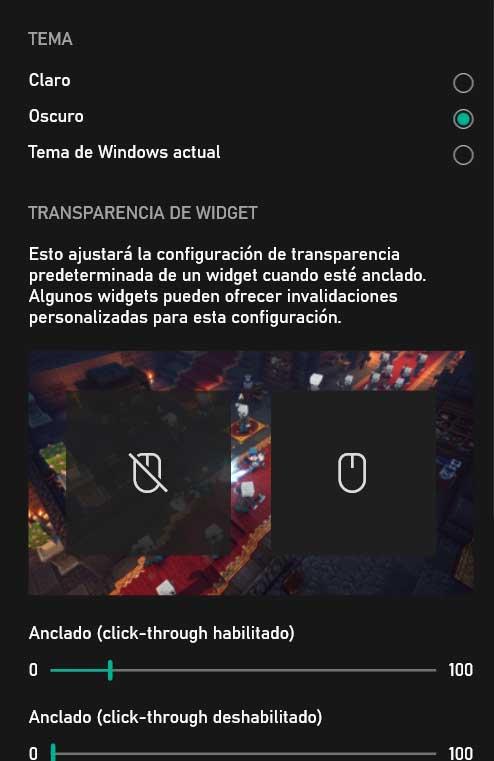 As you can imagine, all this will help us to greatly improve the experience in Windows 10 games. Also, thanks to the shortcuts that this function proposes, we can use all this quickly in the middle of a game .