When we talk about Ubuntu, we mean one of the most highly rated and used Linux distributions in the world. For many it has become an excellent alternative to Windows, and has just received a new version. We are going to see everything that the new Ubuntu 21.04 can offer us from now on.

Codenamed Hirsute Hippo , Canonical just a few hours ago made its new Ubuntu 21.04 available to everyone. There are many new features that we can find in it, so fans of the operating system should update as soon as possible. Therefore, to begin with, we will tell you that despite not being revolutionary news as happened with other versions, the changes are worth it. Many of them are responsible for improving the user experience so that customers can get the most out of the operating system.

At this point we will tell you that among these new features that we are talking about, one of the most representative is that Wayland becomes the default graphic server. As you can imagine, this important change comes from Canonical with the healthy objective of greatly improving the security of the system itself. In turn, it directly affects other common Ubuntu applications such as Firefox, Electron or OBS Studio . All of them will be able to take advantage of the benefits that Wayland brings us, both in terms of safety and operation.

On the other hand, it is also worth highlighting the change in something highly demanded by users for years, permissions. To date, when creating a new user or folder, the default permissions are 755, something not recommended for multi-user teams. But now already in Ubuntu 21.04, these permissions will change by default and will become 750. This translates into an increase in security and privacy in general terms. 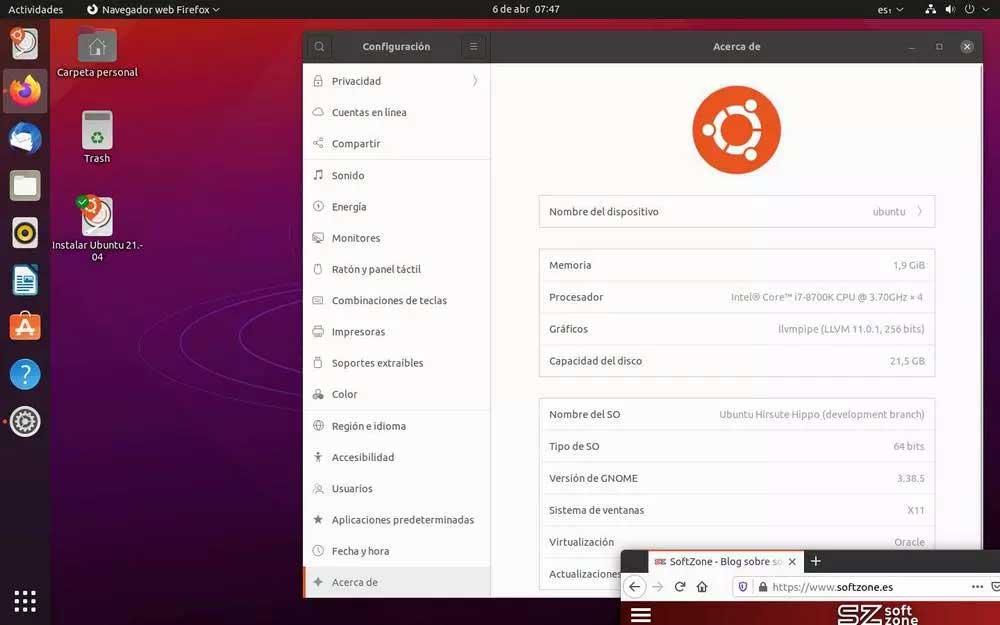 Also, as expected, Ubuntu 21.04 uses Linux kernel 5.11 and will be supported for the next nine months. On the other hand, say that Python 3.9 will come installed and configured by default. With this, what is achieved is to improve the support for ZFS units and also the applications included in the new distribution are updated.

Regarding the user interface of the operating system itself, we will also find some interesting news. Therefore, if we focus on the visual section, we will have a new dark theme that we can configure. At the same time, it is worth mentioning some improvements in accessibility and navigation through the operating system. And not least, in terms of design, Canonical launches new icons for files thus updating this section.

It is very possible that the many users of the popular Linux operating system , begin to receive their corresponding updates right now. With everything and with this, those who prefer to download it by hand to try all its news as soon as possible, will also be able to do so easily. This is something that can be done from this same link .