Valve’s new console is quite similar to a laptop in many ways. This console has gained many fans due to its ability to play fairly modern games smoothly. Internally, the Steam Deck hides a secret and that is that it allows you to expand the storage capacity through an M.2 SSD hard drive.

We can choose the Steam Deck in capacities of 64 GB, 256 GB and 512 GB, being able to choose any of the variants at the time of purchase. Note that once we have completed the order, we will not be able to make any changes to its capacity. If we have chosen the 64 GB model, this is the one that will reach us at home. The good thing is that we can expand the capacity without problems. 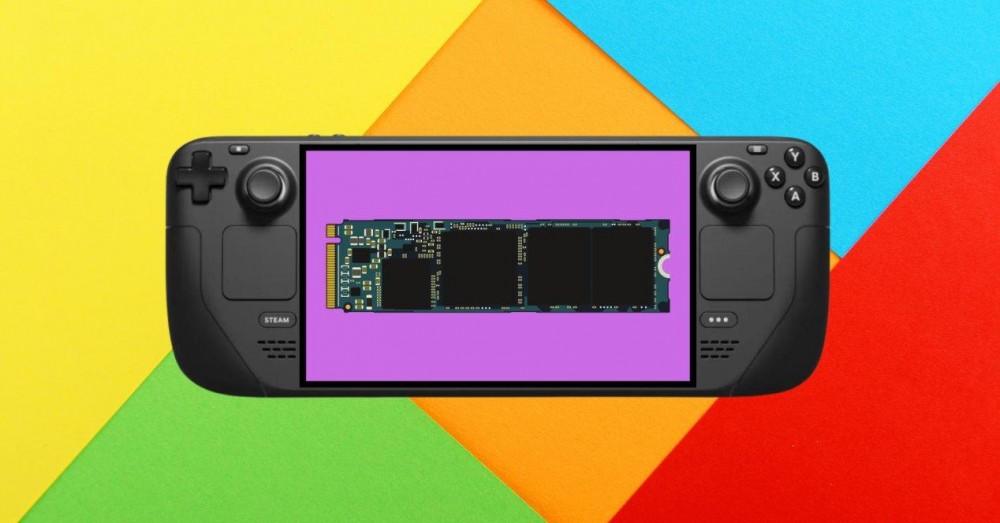 This is Valve’s portable console

Steam Deck is the first portable console that has been developed by Valve and was officially launched on February 25, 2022 . The console would become a competitor to the Nintendo Switch but on steroids.

Said APU has a 4-core processor and 8 processing threads working at a base frequency of 2.4 GHz and that reaches 3.5 GHz in Boost mode. The graphics card , on the other hand, has 8 computing units working at one frequency between 1.0 GHz and 1.6 GHz, offering a power of 1.6 TFLOPS FP32.

The Steam Deck makes use of a total of 16 GB of LPDDR5 RAM that is soldered directly onto the PCB. Regarding storage, the most basic model has 64 GB of eMMC type capacity . The higher models are based on 256 GB and 512 GB NVMe SSD drives.

Something very interesting indicated by Valve is that the console in all models has an M.2 SSD socket . The 64 GB console, being based on eMMC memory, has a free socket, so we could add a secondary SSD to store the games. But, in the 256 GB and 512 GB consoles it is occupied, since in these cases an M.2 SSD is already used

Finally, indicate that the Valve console makes use of the SteamOS 3.0 operating system . Said operating system is a version of Arch Linux, one of the many open source distributions that exist. 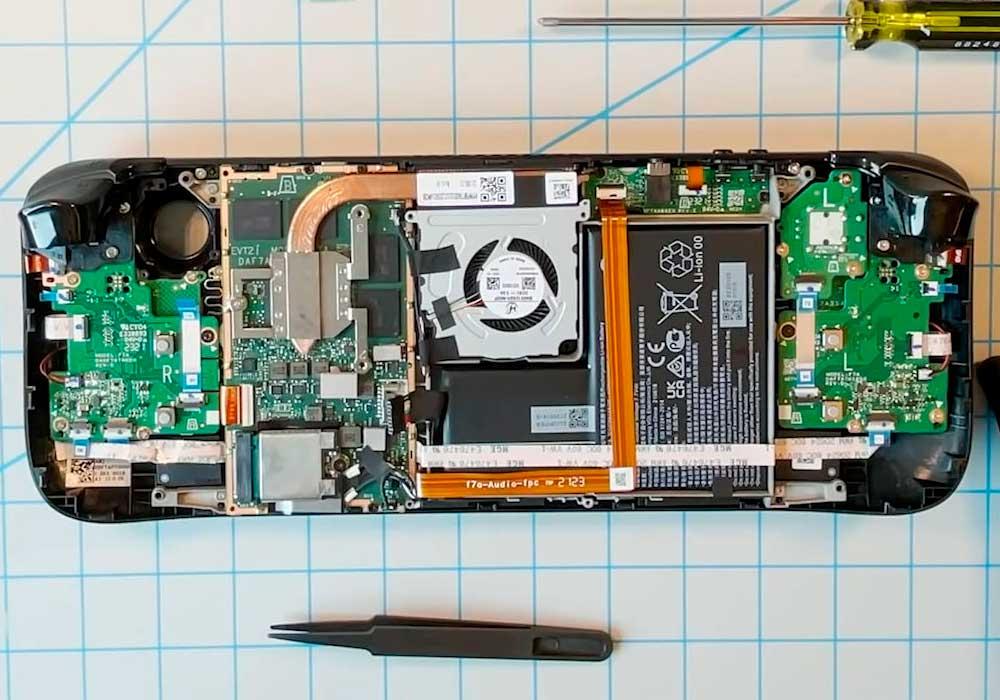 Expand the capacity of the Steam Deck

What SSDs are supported?

As indicated in the official specifications, the Steam Deck has an M.2 2230 port. This means that we can only mount 2230 format M.2 SSD units. Saying that this format tells us the width (22 mm) and the length (30mm).

The 2230 format drives are the smallest and are not exactly the most common . Currently, the most common format on the market is 2280, since it is the standardized format for M.2 SSDs for desktops and laptops.

In addition to this, we must note that in the 256 GB and 512 GB variants the M.2 PCIe SSD port is occupied. It is only available on the console with 64 GB eMMC, but Valve recommends not using this M.2 socket and not replacing the main unit.

We have to say that M.2 2230 SSDs have a capacity limit of 1TB. This may be interesting for the 64 GB model, but for the other two variants, the ideal is to use SD, SDXC and SDHC memory cards. 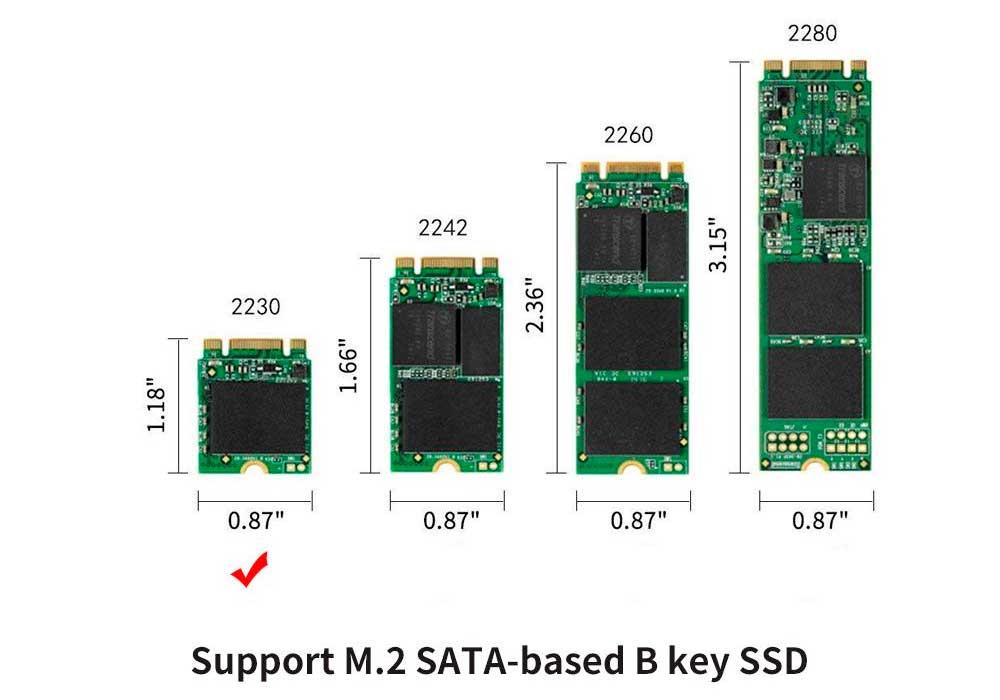 The supply of 2230 form factor M.2 SSDs is quite limited. Note that including this additional hard drive in the 64 GB model could cause temperature problems. Currently we have only found two models available to expand the capacity.

As the most interesting model we have this latest generation Kioxia unit with a capacity of 512 GB . This unit offers us a read of up to 2200 MB/s and a write of up to 1400 MB/s . In addition, the manufacturer itself indicates compatibility with the Steam Deck, as well as with Microsoft‘s Surface and Surface Pro.

We have found as an alternative this drive from WD that meets the format requirement. The drive has a smaller capacity, just 256GB. This drive offers a read speed of up to 2400 MB/s and a write speed of up to 950 MB/ s. It is quite worse than the Kioxia unit, but there is no more to choose from, since they are the only two options on the market.

An alternative with some risk

Twitter user TheSmcelrea has indicated that he was able to install a 2242 format M.2 SSD in the console. As indicated, there are no compatibility problems since the unit does not play with other elements of the portable console. It indicates that the biggest problem seems to be in the heatsink or thermal pad, which has had to be moved a bit.

For this he has used an extension bracket from 30 mm to 42 mm that can be bought on AliExpress without problems. This makes it possible for us to securely fix the storage unit. According to TheSmcelrea, he has been able to close the lid without problems and everything works correctly.

The pcb appears to work fairly well for adapting a 2242 m2 to the steam deck, it doesn’t collide with anything on the motherboard or put any extra strain on any cables. However, it does make the heat spreader bow a tiny bit. The back plate reassembled without issue. pic.twitter.com/4j4LVbS0NG

Note that Valve’s design and software engineer , Lawrence Yang, has asked on Twitter that users not do this . Indicates that this could increase the operating temperature of the console. In addition, it also states that consumption would increase and autonomy would be reduced. It highlights that the console has not been developed to support M.2 SSD units of 2242 format.

Hi, please don’t do this. The charger IC gets very hot and nearby thermal pads should not be moved. In addition, most 2242 m.2 drives draw more power and get hotter than what Deck is designed for. This mod may appear to work but will significantly shorten the life of your Deck.

If you do this, it is possible that nothing will happen beyond having a small decrease in autonomy. We could also notice a little more temperature, although it should not increase excessively either.