When we buy a new computer, when choosing it, we take into account some of the most important internal components that are going to be part of it. At the same time, depending on the circumstances of each one, as a general rule we will ask you to include an operating system like Windows .

Among these hardware components that we are talking about and to which we pay special attention, are the processor, memory, disk drives, graphics , etc. But at the same time we must keep in mind that the same PC has many other components, perhaps less known that we overlook more. With everything and with it, depending on the circumstances, sometimes we will need to know these data. Similarly, we must bear in mind that those details that we can consider as less important in relation to the configuration of the equipment , also influence its performance. It is more, within all this and if we want to obtain more detailed information of that set in which we spend so many hours a day, everything related to the system should also be included. What’s more, all this will be of great help when we make important changes to the PC, such as installing more memory, changing a disk drive, the graphics, etc.

There are users who, to extract a good part of the data referred to here, use some third-party applications external to the system. But what we want to tell you from these same lines, is that it will not be necessary in most cases.

With this what we want to tell you is that the Windows system itself incorporates an interesting integrated function for all this.

This will help us the Systeminfo command in Windows

The same, as we tell you, will be very helpful to extract and know some important details of both the PC as such, and the operating system itself. At this point, we will tell you that here we are going to talk about Systeminfo , a command that is integrated in Windows 10 itself. Of course, this is not something that we will find in Settings or in the Control Panel, but rather what we run from the CMD.

So to access this command line, we type that, CMD , in the Start menu search box. In addition to carry out what interests us here, it is recommended to do it with administrator permissions. 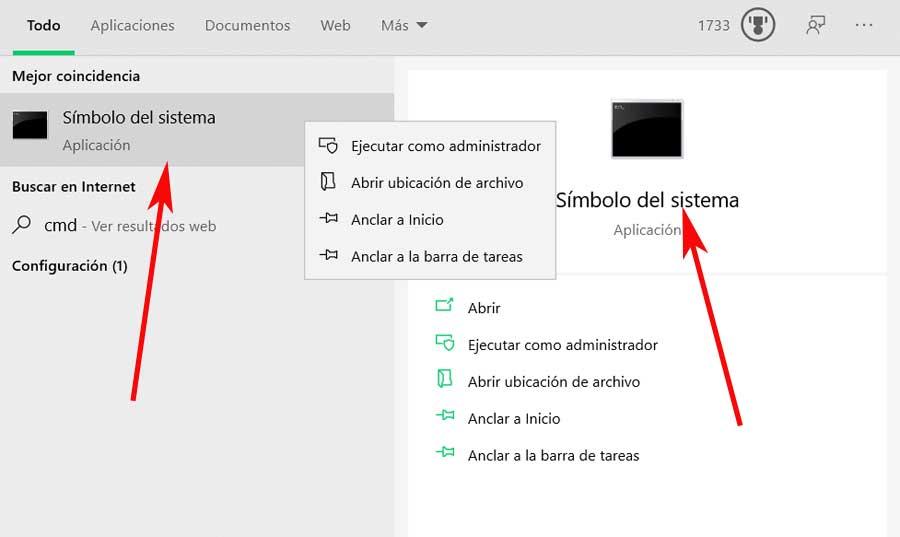 Well, this will give us a new window so that we can already execute the commands, by hand, that we want or need.

How to view Windows installation date with Systeminfo

Thus, in the event that we want to know first-hand the exact date and time when we installed the latest version of Windows, for example, we could make use of the systeminfo | find / i “Original”.

This will return to us in detail the day and time that we installed the latest Windows 10 feature update. But of course, that’s not the only thing we are going to get from the Systeminfo command. In the event that what we need is to see everything that this informative command offers us, let’s see how to achieve it. To do this, from that same Command Prompt window, type the command as is, that is, systeminfo. This will give us back what we are really looking for here.

In fact such is the amount of information that we are going to find here, that we will have to scroll with the mouse to access all of it.

Other data presented by Systeminfo

To give us a rough idea of everything that we are going to find here, at the top of the list we find several fields related to the Windows system. This way we will know things like its compilation, the software ID, its owner, when its latest version was installed or the last boot. This, as you can imagine, will help us when it comes to knowing more details about the Microsoft software with which we work daily. Along these same lines we find, a little further down, the boot disk location, the system directory, the configured language, or its architecture. Similarly we will see what have been the latest cumulative updates that Windows has received. 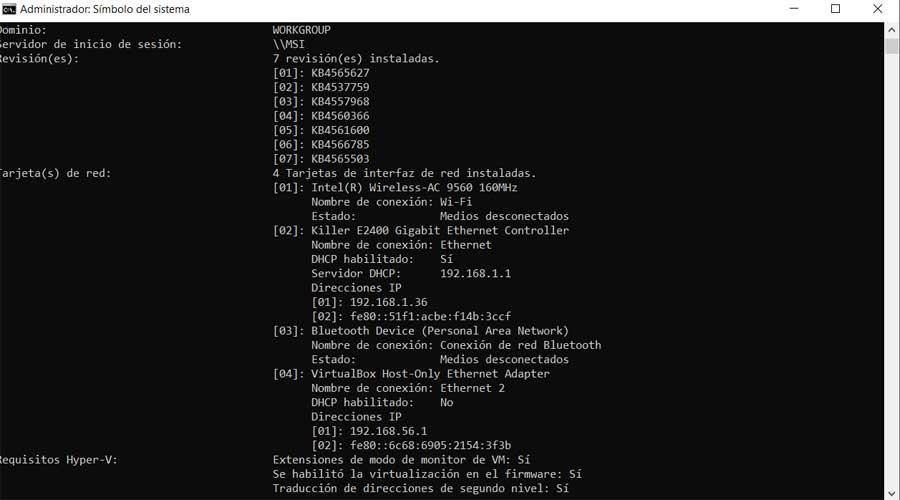 A little further down we are going to find a good amount corresponding, as we mentioned before, to the team we work with. Here we will see data referring to the model of the PC, RAM , processor, BIOS , network connectivity and Bluetooth , the motherboard or the boot device.

One of the main advantages that all this that we are talking about presents us, is that we can obtain all this data in seconds, as we have seen. At the same time, this information is presented clearly and in detail in a single window, even from the Command Prompt. This does not save having to move through annoying menus and submenus wasting time; also without the need to install anything. 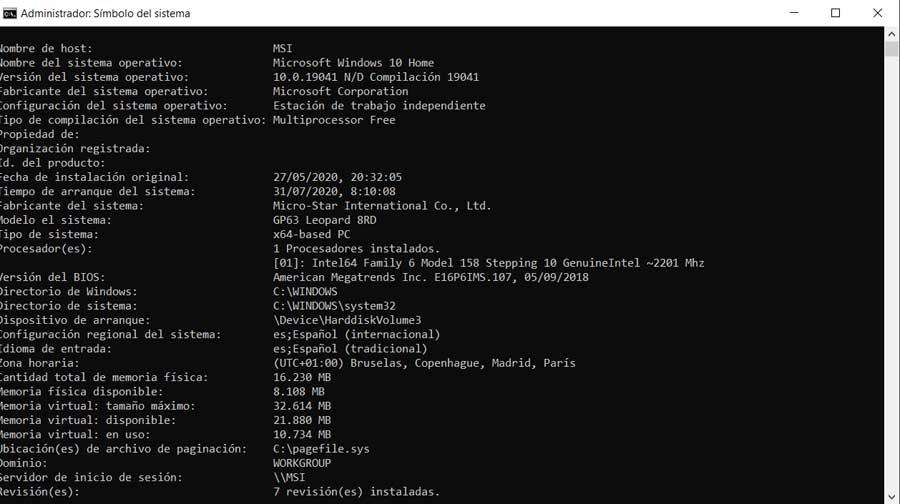 As we saw previously with the section of the last Windows update , we must know that this is a command that allows us to filter the data that it is going to show us. For this, it is enough that we use a structure similar to the one we saw previously, but modifying the keyword that we include in quotation marks. It serves as an example that in the case that we were only interested in displaying the data related to the memory installed in the equipment, the command to be used in this case would be the following: systeminfo | find / i “memory”.

A graphical interface to know the information of the PC

But of course, under these same circumstances, it may be the case that we do not want to use the Windows Command Line , but rather something more graphic. In that case, as we mentioned before, the operating system itself does not have any internal solution that can help us. That is why we can use a third-party alternative solution.

One of the most popular proposals of this type is AIDA64 , a software that has been around for a good number of years and has not stopped improving. You can download it from this link . Here we are going to find a pleasant user interface with a multitude of categories that will show us an enormous amount of data related to the equipment, both hardware and software. 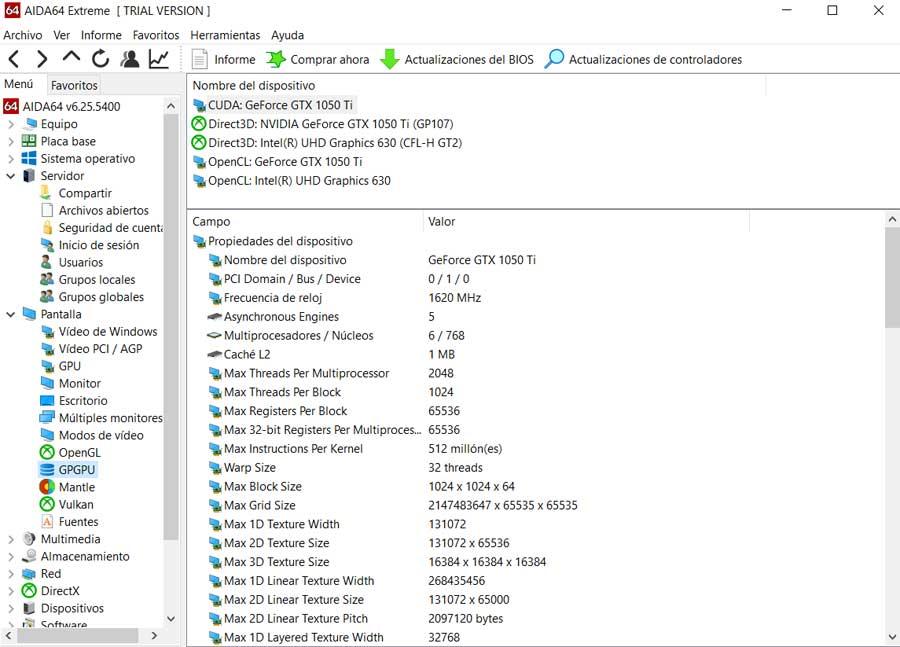 Another interesting alternative in this sense is found with CPU-Z , a totally free software that you can download from here . 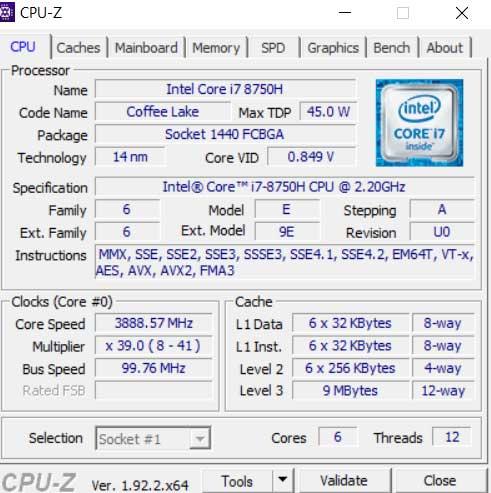 As you can imagine, it also shows us almost everything we need to know about our team, which will be very helpful if we need it for information.