When we refer to the keyboard, we are actually talking about one of the components that we have connected to the PC that we use the most. In fact, together with the mouse , it could be considered as the quintessential input peripheral of the many that we can use in these times.

This we use to enter the corresponding characters in the computer , among many other things, hence its importance. In a way it acts as a connection interface between the user himself and the operating system. That is why it is one of those peripherals in which most of the time it is worth investing a little more, since in the long run we will appreciate it. Due especially to its widespread use in all areas, on the Internet we can find a multitude of applications and utilities related to this element. Something very useful that we have probably considered on more than one occasion, is the possibility of deactivating a specific key of this component. This may be because it does not work well, because we are constantly confused, or simply because we want to eliminate it so that it is no longer used. Well, at this point, we are going to talk about a useful application that will help us in all of this.

To start we will tell you that for those people who really need this utility that we mentioned, they will not find too many proposals of this type. So this is software that can become very interesting. You should also know that it is a program that despite the time it has been with us, about four years, and that has not been updated for a while, continues to work perfectly in Windows 10 . Hence, its functionality remains intact.

Therefore, in order to get the most out of it, that is, to block any keyboard key in Windows, we only have to install it on the system. It is worth mentioning that it is not a free solution, but we have a period of one day to test its operation before finally purchasing it. Say that in addition to Windows 10, this software works with previous versions of the Redmond system , even with XP. As soon as the tool is started for the first time, what we must specify is the language in which the peripheral itself is located, this to refine its operation.

This will then give way to an intuitive user interface that doubles as the utility’s control panel. In fact, it could be considered that its manufacturers, with the same, try to facilitate the use of the application as such to the maximum and be able to get the most out of it.

Disable any key in seconds

This is a software that even without offering too many options in regard to the configuration of the program, fulfills the task that we are looking for without problem. To do this, initially, once the program is running, we just have to choose the key in question that we want to stop working. This is something we accomplish through the field called Thecla; why more complication.

When clicking on the Select button next to it, an extensive list appears with all the keys that are part of the keyboard that we have installed on the PC . 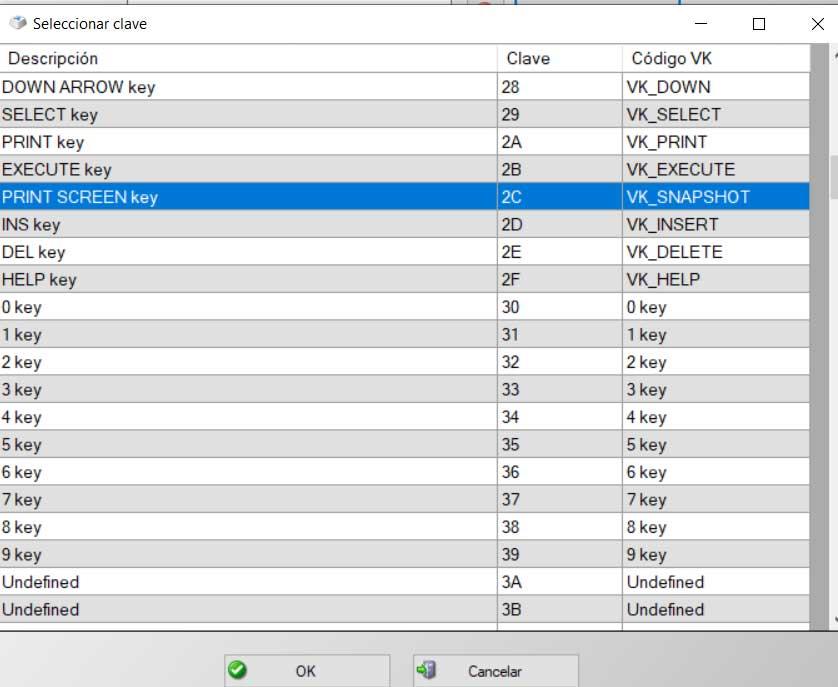 Therefore we will only have to select the element that we want to block, and that’s it. As we can see first hand, the operation of Simple Disable Key is extremely simple, even for inexperienced users. Of course, it is worth mentioning that from the same interface of the program, we can do this with as many elements of this type as we think appropriate. The selections will be added to the list at the bottom of the window. 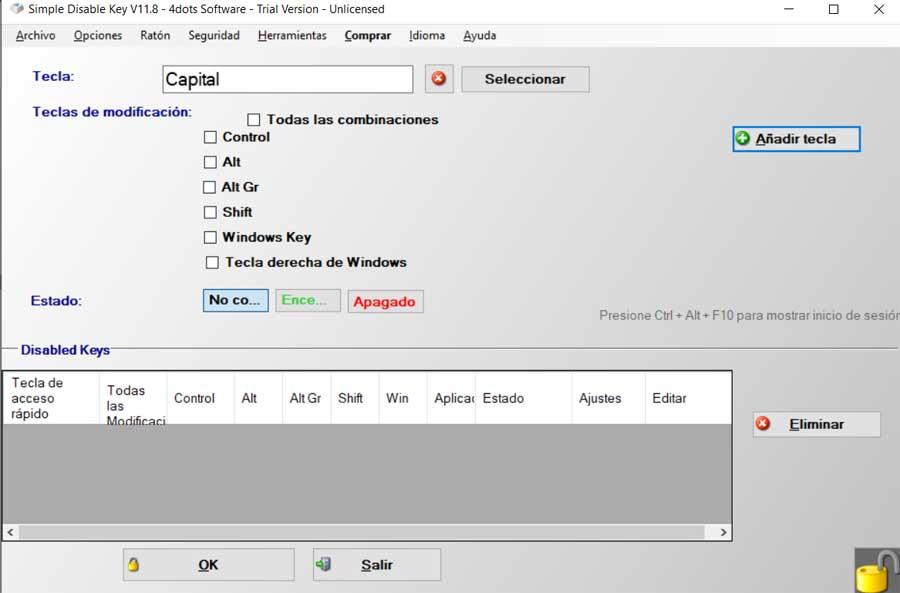 But of course, we must bear in mind that as a general rule these elements of widespread use, on many occasions we use them together with other complementary keys. Here others like Ctrl, Alt, Shift , etc. come into play. That is why the program itself also tries to make things easier for us in this same sense. That is why at the same time we have the possibility, additionally, to block that key that we have selected, along with all its combinations mentioned, or individually.

At the same time it is worth mentioning that, for security reasons, we have the possibility of including a use password to configure these locks that we refer to. 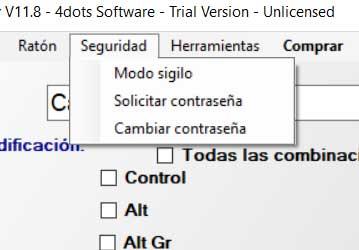 Obviously, this will allow us to prevent any user who sits in front of this PC from blocking keys for pleasure, which can be somewhat dangerous. In fact, additionally, in the program’s Options menu, we can also customize the Windows user accounts that can use the software as such.

As we mentioned before, when it comes to this type of key lock tasks, we hardly have any alternatives to this software that we have talked about. It is true that we can use similar alternatives that allow us to remap certain keys in order to, in a way, cancel them or change their behavior, but it is not the same. For example, this is the case of KeyTweak, an application that you can download from this link .

We achieved something similar with the proposal called Key mapper, an open source program that also allows us to reassign the values of a specific key. For this, we will only have to download the program from this link .

We already told you before, that in this case we are talking about a program that will be useful for you when blocking certain keys in Windows. However, perhaps due to its exclusivity, saying that it is not a free solution. For starters, in case you want to try them first hand, you can get it from here .

This will give us the opportunity to test the program over the course of a day in order to get an idea of its operation and effectiveness. Once that period of time has passed, we will be obliged to buy the license in order to continue using it. Thus, the price of the program is 22.60 euros.