In our computer we generally have a main operating system , either Windows or any Linux distribution, as with Ubuntu. However, as you know, we also have the possibility of trying any other, for example, through a virtual machine. For this we have specific software such as the popular VirtualBox.

And it may be the case that we want to change the operating system, for example, for one of the many Linux distributions available. But going around installing and uninstalling the main operating system on the computer can be somewhat annoying. As we said, we have the possibility of using a virtual machine that allows us to install this software in it and test it first-hand. For this, it is enough that we have the ISO image of it and load it in a matter of seconds. This will allow us to take a look at how this new operating system works and looks without having to actually install it on the computer. We already mentioned that there are different programs that allow us to do this, such as VMware or VirtualBox , among others. It is worth mentioning that one of the most popular in this sector for the end user is this second case that we comment on. It is a fairly simple program to create and run virtual machines available to almost everyone.

But we must configure it properly in order to get the most out of the virtual operating systems that we load here. The program itself offers us a series of very interesting functions for all of this. In this case we want to focus on the so-called VirtualBox Guest Additions. Specifically, we will talk about the need to install these software elements to run Ubuntu virtually.

Why do I need the Ubuntu VirtualBox Guest Additions

The first thing to know is that Ubuntu is a most loved Linux distribution. Precisely for this reason it is one of the most tested and loaded in programs like Virtual Box. On the other hand, it is worth mentioning that the Guest Additions, despite not being essential to be able to test the Linux operating system mentioned, are recommended. The main reason for all this is that, if we are going to use Ubuntu in VirtualBox for a long period of time, they help us to improve the experience and the functioning of the system . 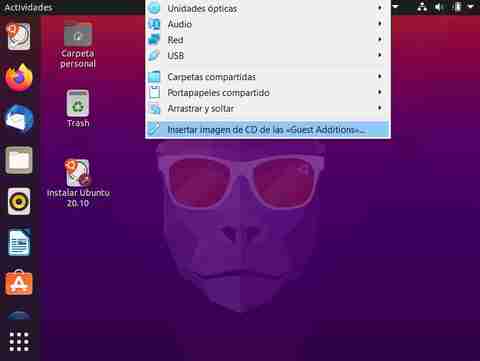 Actually, these are functions and features that are installed in a complementary way in the mentioned Ubuntu. We are talking about a series of utilities that help optimize the virtualized system and improve its performance. In addition, adding them is extremely simple , since once the system is loaded we only have to go to the menu Devices / Insert CD image of the Guest Additions . These are provided virtually from the ISO download of the operating system itself.

They add additional drivers, greater integration with the virtual machine, and functions that will help us in these environments. That is why in most cases it is advisable to install the Ubuntu VirtualBox Guest Additions . Unless we are only going to use the operating system for a few minutes to test it and load the ISO of another. In that specific case, we could do without these additional software elements.