Subscriptions are here to stay and not only to streaming video platforms, but also to the world of video games, with Xbox Game Pass being the best option currently available on the market. Sharing an Xbox Game Pass subscription on PC is an interesting option to start saving with so much subscription around us.

Unlike streaming video platforms, where each user can create their own profile where personalized recommendations are generated based on the content that has been previously played, Microsoft‘s video subscription platform, Xbox Game Pass, does not work like that. What kind of subscription do I need?

As I mentioned in the previous section, Microsoft makes three types of subscriptions available to PC users: PC Game Pass, Xbox Game Pass and Game Pass Ultimate, but in this article we will only talk about subscriptions that allow us to share them with other PCs.

PC Game Pass allows us to access more than 100 games, only on PC, including all the launches that arrive on the Xbox Game Studios and Bethesda platform, as well as a large number of highly successful independent titles.

This subscription is priced at 9.99 euros per month.

The Game Pass Ultimate subscription not only allows us to play from a PC, but we can also use it on both Xbox consoles and mobile devices using Microsoft’s cloud video game streaming platform.

It allows us to access the same catalog as the PC version and has a price of 12.99 euros per month.

If you want to save a little more money on your Xbox Game Pass subscription and you don’t mind paying several months in advance, you can choose to go to Amazon or platforms like Instant Gaming or Eneba where you will find subscription cards for this platform at a lower price on that Microsoft offers us from the application itself on a monthly basis.

The type of subscription that offers us the greatest savings, we find it in the one that lasts 12 months, although we can also find interesting offers of 3 and 6 months, although the savings in comparison are lower.

These platforms offer us a code that we must redeem in the application in order to start enjoying Xbox Game Pass. It is advisable to use this type of platform since, in this way, we avoid having to associate a payment method to our account if we insist on sharing our main account with the subscription, an option that is not recommended.

The main advantage that we find if we share an Xbox Game Pass account with other people is that the monthly amount to be paid is reduced . The more friends join the club, the less we pay. However, the more we are, the more difficult it will be to have them all controlled, since one of the limitations of GamePass is that only one user can play at a time, even if the account is associated on different computers and Xbox consoles.

The biggest problem we find when sharing an Xbox Game Pass subscription is not found in the platform options, but in something much more important: our privacy . By sharing a Microsoft account, we are giving access to all of our personal data associated with the account.

Before you start sharing a Game Pass account on PC with other users, you must create an account in the Xbox app. If you haven’t downloaded the app yet, you can do so directly from the Microsoft Store. When opening it, they must use the same credentials as in the Microsoft account as long as you want to keep the progress in the games as well as the achievements.

Once all the users who are going to enjoy the same Xbox Game Pass account have created an account in the Xbox application, the time has come to start sharing everything it offers. 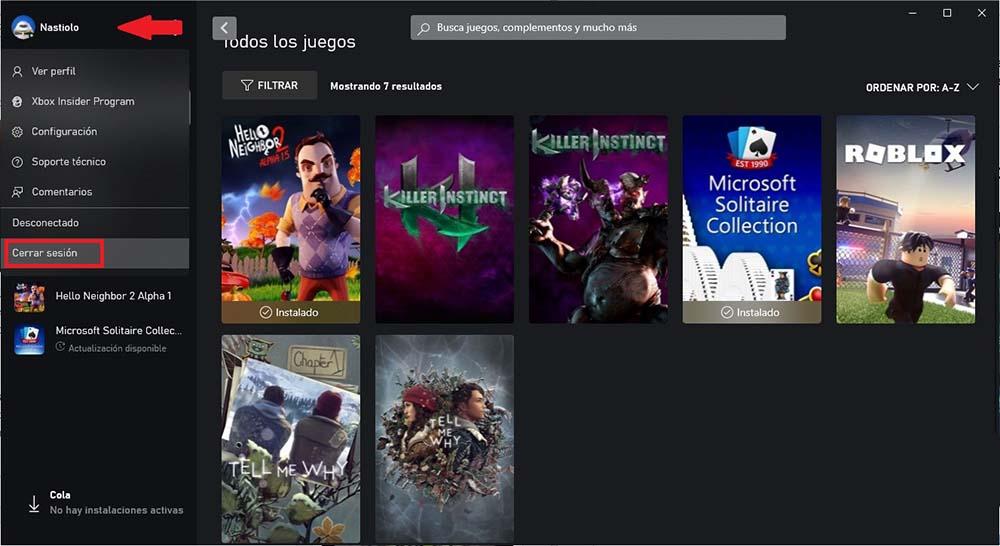 Next, we go to the right part of the application, click on Game Pass to access all the games that are available at that moment and download the titles that interest us the most.

To run them, we just have to click on the Play button. It is not necessary to be logged in with the same Microsoft account in which the subscription is available.

If you are tired of the games that you had installed and want to take a look at the number of titles available on Xbox Game Pass again, you must go through the same process again, but not without first asking the friends with whom you share the subscription for if anyone is currently using the main account, as it will kick them out of the game.

Considering the large amount of space that some titles take up, if you don’t plan to play again, the first thing you should do is delete them from your computer before continuing to install new titles.

To uninstall the games that you install through the Game Pass subscription to free up space or the titles that you have installed from the application and that have nothing to do with the subscription, you can do it from the application, placing the mouse over the title in the left column, clicking on the 3 points horizontally and selecting Uninstall.