Microsoft‘s operating system is made up of a multitude of functions and applications that enhance our experience on a day-to-day basis. More advanced users use the command prompt or PowerShell for certain tasks. But here we are going to show you how to use Windows Terminal by default.

When we have to use Windows through various commands, for a long time we can use the two mentioned tools that are integrated with the system. It is worth mentioning that Windows opens all the line tools available through commands in the old Windows Console environment. However, at this time we can already make the Windows Terminal application the default Terminal application every time we launch the Command Prompt or PowerShell. Why switching to Windows Terminal is preferable

This is a much more modern and advanced application when it comes to working with the Microsoft operating system based on commands. In fact, there are several advantages that it offers us compared to the command prompt window or even PowerShell . At first, it is worth mentioning that this new Windows Terminal offers us several customization functions for its user interface. Among many other things we will say that we have the possibility to change the desktop background here, and even set an animated gif.

We also have at our disposal a good number of key combinations and shortcuts to work in a more fluid way from this section. In addition, this new application will serve to unify several terminals into one, hence its enormous utility. But that is not all that we will find in this new tool to work in Windows based on commands and script.

Surely many of you already know that when we open a Command Prompt or PowerShell window in Windows 10, each session begins in a separate window. Unfortunately that means that we may end up working in a multitude of open windows on the desktop. This can sometimes turn into a real disaster. However, this application opens in a tabbed window by default. As you can imagine, this will help us to a great extent to manage several command line windows simultaneously. Also, we have the possibility to run PowerShell and CMD in separate tabs from here as well.

Set the default application to work with commands

To all the comments we can add that this new tool gives us access to other very interesting features. Here we can include elements such as themes, emoji support, multiple sessions, split panels, and many other customizations. Unfortunately all these features are not going to reach the Windows Console that has not been accompanied for so many years. That is precisely why changing the default application for this new one is a good idea.

At this point, it should be mentioned that Windows 11 uses it as the default command line environment. So from it we have the possibility to open CMD, PowerShell and the Windows Subsystem for Linux or WSL . But if we are going to continue using Windows 10 for a while, or until Windows 11 starts to roll out, now we can start using Windows Terminal as your default option on the current system.

Before starting anything, the first thing we will need is to download and install the application on our computer if we do not have it. This will allow us to set it by default later as we are going to show you. Arrived here It is worth mentioning that it is a UWP application, so we can directly download it from the official system store, the Microsoft Store . Next, we leave you a link so that you can access it directly.

Once we have it downloaded and installed on our computer, we will have the possibility to start and work with this command-based program.

In the Settings window that now opens we will have the possibility to specify that this is the default application. That means Windows will now use that tool as a legacy terminal app for CMD or PowerShell. It must be said that the Windows Terminal configuration uses the Windows console by default. So we just have to click on the drop-down list and choose the one that interests us in this case. 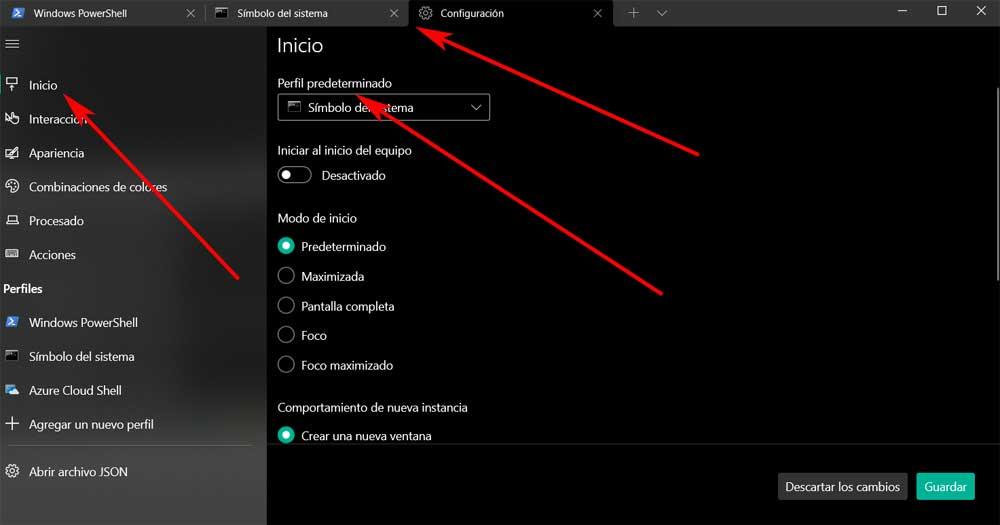 Let’s not forget to click on the save button that is located in the lower right corner of this window so that the changes are effective. From now on and by default, the Windows Terminal application will use the PowerShell profile when the application starts. But at the same time we have the possibility to change it to run with a different shell profile.

At the same time, we must bear in mind that in this same configuration section we have many other customizable options. We just have to go through the different categories that we find in the left panel to take a look at the available options. As we mentioned previously, from here we will have the possibility of adapting both the appearance and the behavior of this application to our needs. Hence precisely that it becomes the program to work with commands in the system of the future.

We will soon realize that the limitations of CMD and PowerShell compared to this tool are many. Now we only have to get used to its use as we did with the programs that served as the terminal in Windows that we have used so far.