Stupid question. no? Well, it really is in a rather curious limbo where the possible could be made probable and this could trigger something true. But how could a heatsink power your fan or fans without any external source of electricity? Welcome to the Seebeck effect , which we will deal with from a computer point of view for a PC.

To understand the Seebeck effect we have to understand something as basic as the operation of a CPU or GPU heatsink and of course the materials of which it is formed. It is true that these materials vary in composition, so to make this effect possible and to make sense of the question we will focus everything on two unique metals. This effect has as its inventor father Thomas J. Seebeck, an Estonian-born natural physician and physical researcher who discovered, among other things, the thermoelectric effect, also known as the Peltier-Seebeck effect where both are the basis of so-called thermocouples .

The Seebeck effect is therefore the opposite of the already famous PC peltier effect and is based on a very simple premise: create electricity through the heat generated, or, put another way, convert heat into electricity.

Seebeck discovered that an electrical current was achieved in a circuit made up of two homogeneous metals with two junctions at different temperatures. But what is the beginning of this phenomenon?

This effect is possible because metals respond differently to temperature difference and thereby create a (direct) current that at the same time produces a magnetic field, all thanks to so-called charge-carrying electrons, which will diffuse from the hot end to the cold, since in the latter there is a lower density of hot carriers and vice versa.

Could heatsinks generate their own current for a fan? 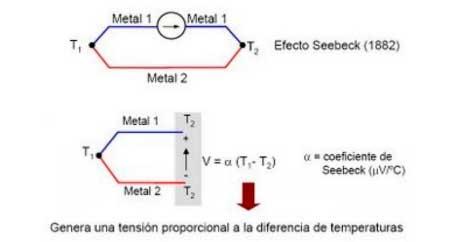 Having understood this, you just have to think of any aluminum and copper heatsink, where the heat is emitted by the CPU or GPU. We have all the ingredients: heat, two metals and a circuit that is formed by its welds with two different temperatures, that of the chip itself and the temperature of the air in the fins.

So why isn’t power being generated from any heatsink that meets these conditions? It would not have to rely on the motherboard to function and could be regulated by PWM as the sole parasitic function, as AIO pumps generally do.

The theory would work wonders if it were not for two factors: infinitely better solders are required than today, which would make the price of each heatsink more expensive, and secondly, the Seebeck effect is extremely inefficient . 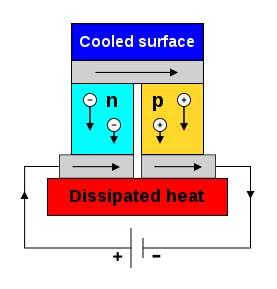 For this idea to be carried out and leaving the named costs aside, it would take a huge amount of heat to barely provide stable millivolts.

If we needed one or two volts, then we are talking about temperatures more typical of a metal foundry than a PC. With the degrees that a current CPU or GPU obtains, we would hardly have to overcome the bearing force, without axis and without blades, so the industry, although it takes this effect into account when designing its products, maintains the fans with their corresponding PWM or 3-pin for obvious reasons.

The closest the PC industry has come to using heat as a source of fan movement was with the Stirling motor and it was a failure, something we will see in another article.