One of the problems of modern web browsers is the large amount of resources it consumes. Web pages are getting bigger, more dynamic, and have all kinds of elements and scripts to carry out their function. And this translates into an increase in the consumption of RAM and CPU. For this reason, it is essential that the developers of these browsers (Google, Mozilla, Microsoft, etc.) work to optimize, or reduce, the consumption of these resources to avoid weighing down the performance of computers. And the next to bring us a great utility for this is Firefox. Firefox is Mozilla’s open source web browser . This browser has always stood out for offering users superior performance than its rivals, in terms of speed and resource consumption, as well as better privacy. However, this performance improvement that it has been boasting for years has been falling short of the improvements of its rivals. With the arrival of Firefox 67, the browser implemented a series of memory-saving functions, although due to some problems with computers with few resources, this function was withdrawn.

Now, Firefox prepares a new version of this function to be able to save RAM memory when working with this browser. And it’s now available in the Nightly version of Firefox 94.

This is the about page: unloads

about: unloads is a new internal configuration page of Mozilla’s browser from which we will be able to have control over the function of suspending inactive browser tabs. Thanks to this new configuration page, we will be able to get an idea of how the browser is managing the tabs, how it prioritizes them and which tabs will become inactive when they are not being used. 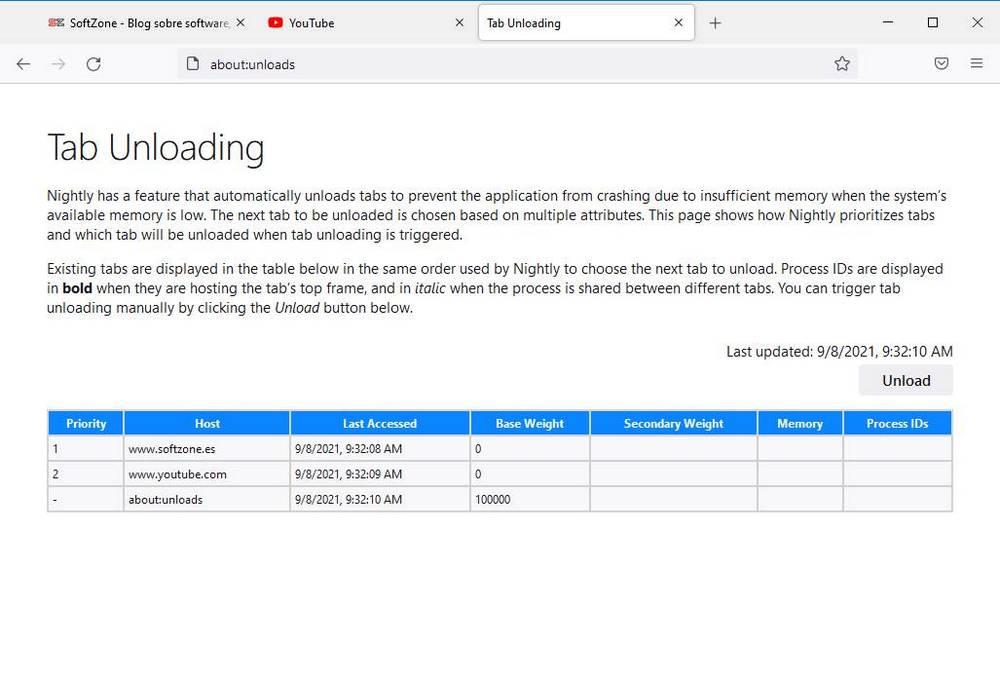 Within this page we will also find a button called “Unload” from which we will be able to manually suspend the heavier tabs that we no longer want to be active. In this way, we can free up your memory and your resources. If you need it, just by clicking on its tab, the web will reload automatically.

Firefox already has other similar internal pages, such as about: performance, and even its own task manager. The difference of this is that, now, we will be able to suspend the tabs manually, something very useful in computers with a lot of RAM memory that, in general, do not make the resource control systems jump.

How to test this new Firefox feature

For now, Mozilla is only using this new resource-saving system within the Nightly branch of its browser, which, together with the launch of Firefox 92 yesterday, has made the leap to version 94. Over the next few months, the company will thoroughly test this new feature to ensure that it works correctly and, if all goes well, it should reach all users when version 94 of the browser arrives.

If you want to try it first-hand, without waiting, we recommend downloading and installing the latest Nightly version of Firefox, which we can download for free from this link .