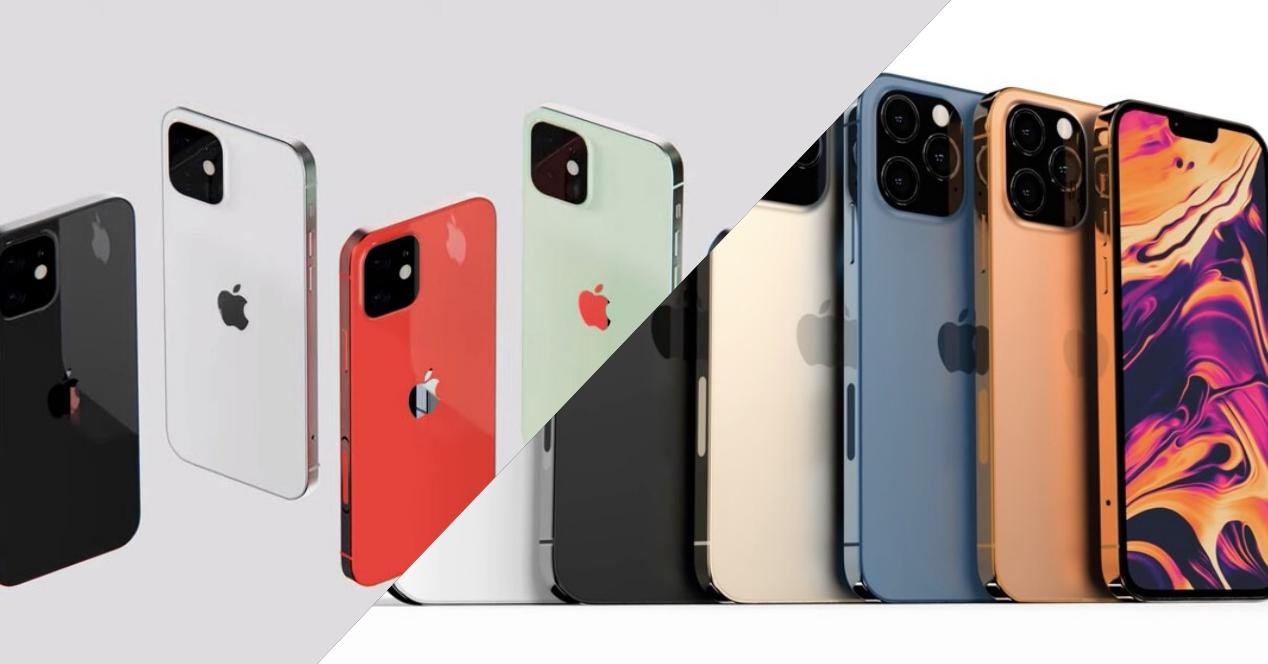 Despite the fact that they are still two months away from being official, the iPhone 13 has been on the lips of many for a long time. Thanks to the leaks that have been known in these months and the most recent reports it has been possible to know that there will be four models (13 mini, 13, 13 Pro and 13 Pro Max). In addition to price , which is always a differential factor, what other aspects will differentiate you? We analyze it below.

That cameras are very relevant aspects in a smartphone and that it is one of the sections where Apple puts the most effort is no secret. It is known that all models will bring larger lenses this year that will also force the camera module to be larger. There is talk that they will have astrophotography functions and that there will be considerable improvements when it comes to the ultra wide angle camera . And this is expected to be for everyone, although it is not ruled out that the ‘Pro’ and ‘Pro Max’ have a better focal aperture in some of their cameras. However, the main difference between these will once again be the telephoto camera of the more advanced models, which will still not be present in the ’13’ and ’13 mini ‘that will conform to the wide-angle and ultra-wide angle. Another aspect where a difference will also be made is in the LiDAR sensor . There was much talk that after the premiere of this lens in the iPhone 12 Pro, we could see it in all the models this year, but numerous leakers have already been in charge of denying it and announcing that, if this function reaches non-Pro, it will be next year.

We recall that the highlight of the LiDAR sensor functions in the iPhone highlights the fact that they are ideal for augmented reality , in addition to offering better photographs in portrait mode by being able to better detect the distances between people or objects with the background, especially in low light conditions.

Exclusive ProMotion screen for the ‘Pro’

If there is an open secret in the iPhone 13 Pro and 13 Pro Max, that is the 120 Hz refresh rate , something that the iPad Pro have since 2017 and what Apple calls ProMotion technology. The fact that there have been mobile devices with this technology in Android for 2 years accelerated Apple’s plans to bring them to the iPhone and although it is known that they tried to incorporate them in 2020, they finally did not succeed. This is a technology that, except for a capital surprise, the iPhone 13 and 13 mini will not incorporate, having to go to the ‘Pro’ to be able to enjoy it. If you are not sure what that refresh rate means, you should know that it is the number of times the screen is updated per second (currently it is 60). Having 120 Hz will offer a much more fluid visual experience in a multitude of actions such as navigating between system menus, but also when playing video or video game content.

There is less and less time to confirm all the characteristics of these new iPhone and it is more than likely that these two commented differences will not end up being the only ones. However, they are the ones that, at least for now, seem the most prominent to us and that in many cases could be a weighty factor when choosing one or the other range.