Sony launched its popular PlayStation 4 console in November 2013. And today, despite having its successor, the PS5, already on the market, it is still a console that receives both new firmware updates and new games. With nearly 120 million consoles sold, it is one of the most successful consoles in the history of video games. But, if we don’t have one, we will be able to play its games on PC thanks to these PS4 programs and emulators. The PS4 was designed to go head-to-head against the new console developed and launched by Microsoft, the Xbox One. And, although the generation began with Sony winning by a lot (both for being a more powerful console and for having a better catalog and much less problems), facing the end of the life cycle, Microsoft has made things very difficult for this PS4. And it’s all due to both the revisions of his console (the One S and the One X) and the launch of his Game Pass. Thanks to this, the next generation of game consoles is going to be much more interesting.

Although game consoles are becoming more powerful, complex, and complicated to emulate, the PS4 was not going to run out of its share of emulators for PC. And, next, we are going to see what are the best alternatives that we can find to run your games on any Windows computer.

Before seeing the emulators as such, we are going to review, above, what has been the catalog of this video console. The truth is that Sony has not risked too much when it comes to offering new experiences to users, and except for some new franchises (very successful, by the way), most of the most successful games on this platform are sequels, prequels or remasters. of titles already released for previous Sony consoles.

If we have not touched a PS4 before and we want to start with it, we are going to see which are the essential games that we must play.

These are some of the best games we can find for the PlayStation 4, both personally and based on Metacritic scores. Although, of course, there are many more games that, if we are interested in this console, we should not overlook.

Although it is possible to use a PS4 emulator to be able to run the games of this console on a PC, as we have said, it is a very complex and powerful platform, so we will not be able to get an experience as perfect as the one we can get, for example, when running a console like the PSX or PS2. Despite this, there are some very interesting projects underway that will probably become excellent emulators over time. Let’s see the best.

Orbital, the first and most advanced 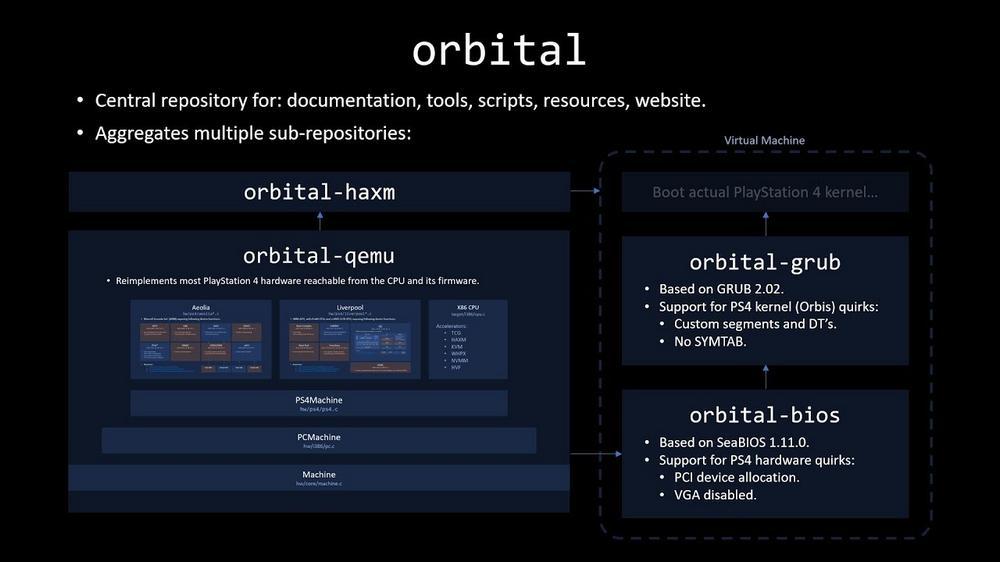 Orbital landed on GitHub more than 3 years ago as the first PlayStation 4 emulator for PC. This emulator uses virtualization to load different versions of the firmware of the Sony console (specifically 4.55 and 5.0) and to be able to access the XMB of the console and load some titles from it. However, it is an emulator still in a very early stage of its development, and its creators want it to be accessible only to the most advanced users. For this reason, they do not offer us a binary that we can download, install and run, but instead force us to compile each of its parts (BIOS, GRUB, QEMU), as well as extract the keys from our own console.

If we have enough knowledge, we can emulate the PS4 console on the computer in a more or less acceptable way. Otherwise, we will have to look for other alternatives.

We can download the PS4 emulator for Windows, macOS and Linux from its GitrHub repository .

GPCS4, another of the most advanced 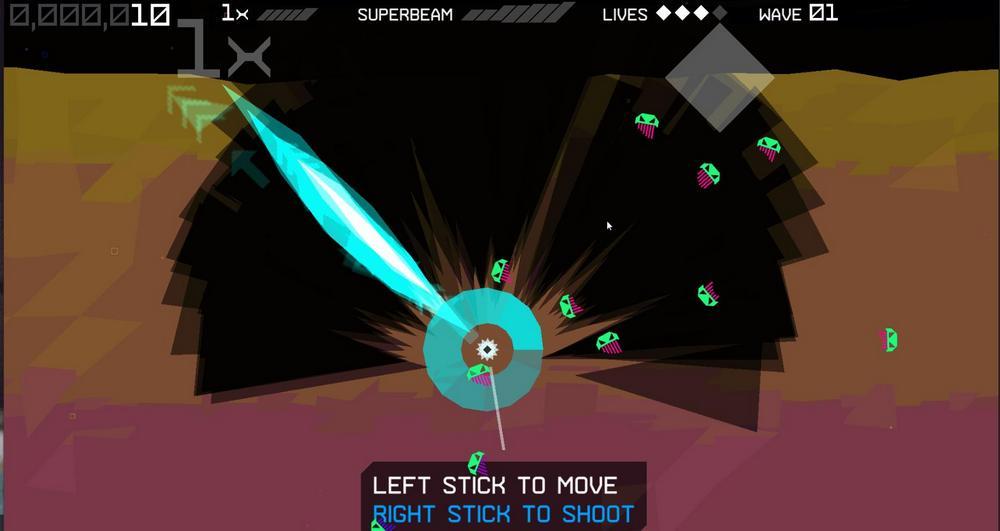 Although GPCS4 started out simply as a project to learn 3D graphics development, it finally broke through by emulating its first commercial game: We are Doomed. It is a fairly slow emulator since it does not have hardware or software optimizations, so the games it runs do so with a fairly low FPS rate. However, it is capable of recompiling all the game’s shaders and textures until the program’s buffers are full.

Although its development is somewhat slow, we cannot deny that it is a working emulator capable of running games. Of course, he still has a lot of work ahead of him. If we want to give it a try, we can download it from its GitHub page , since it is, again, an open source project.

While the two previous emulators are almost technical tests of what it could be, Spine has managed, in a very short time, to be the emulator capable of running a greater number of games for this console. This project, although it still has quite a few bugs, errors and problems, is capable of running between 20 and 50 PlayStation 4 titles on PC. Of course, we do not expect to run the most powerful games like The Last of Us Part II, but its list is limited to low-power Indie titles.

It is an emulator that is only available for Linux (for now), given the libraries it depends on. Therefore, to run it you will need to have a distro installed on your PC (such as Ubuntu or Linux Mint), load a distro into RAM from Live mode, or master the Windows Subsystem for Linux to be able to run it.

We can get more information about this PS4 emulator for PC from here .

PCSX4, a threat we must avoid

PCSX was the first PlayStation 1 emulator, and one of the best that has stood the test of time. With the arrival of the PS2, its developers launched PCSX2, designed to emulate the new Sony console, and also being one of the best for this console. However, beyond the PS2, this emulator has not received any new versions.

For a long time, an alleged PS4 emulator called ” PCSX4 ” has been circulating on the net. However, it is not an emulator as such, but rather a scam, controlled by hackers, that promises to play PS4 games on PC, but actually performs other malicious activities on PC, how to subscribe to Premium SMS services.

Be very careful with this fake emulator, since trusting it can be very expensive.

Play on PC without PS4 emulator

As we can see, although the emulators work, they still have a lot to improve. Does this mean I won’t be able to play PS4 on PC? Not much less. There are other ways to play PS4 on PC, legally, both for free and paying a small monthly fee, depending on whether or not we have a console in our possession. 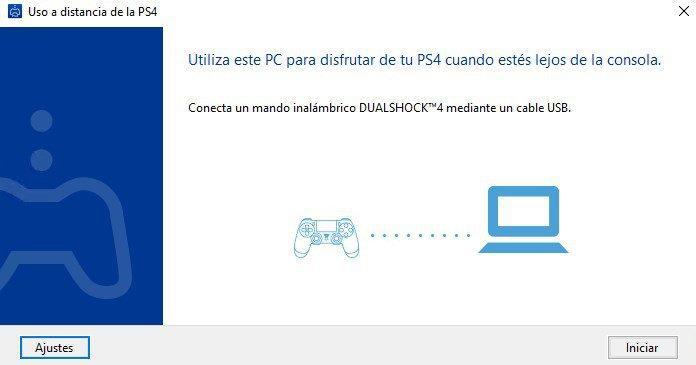 Thanks to the remote use of PS4 we will be able to control our PlayStation 4 console remotely from anywhere. For example, we can connect to it from the home computer thanks to the LAN to play from another room, or do it from outside the home, through the Internet, for when we are traveling or on vacation.

However, this technology has some limitations. For example, some games may not support Remote Play (such as those using the camera or VR), we cannot use Remote Play when screen sharing or Blu-Ray player use, and unless we have the PS4 Pro, we will have to settle for a remote game at 720p. 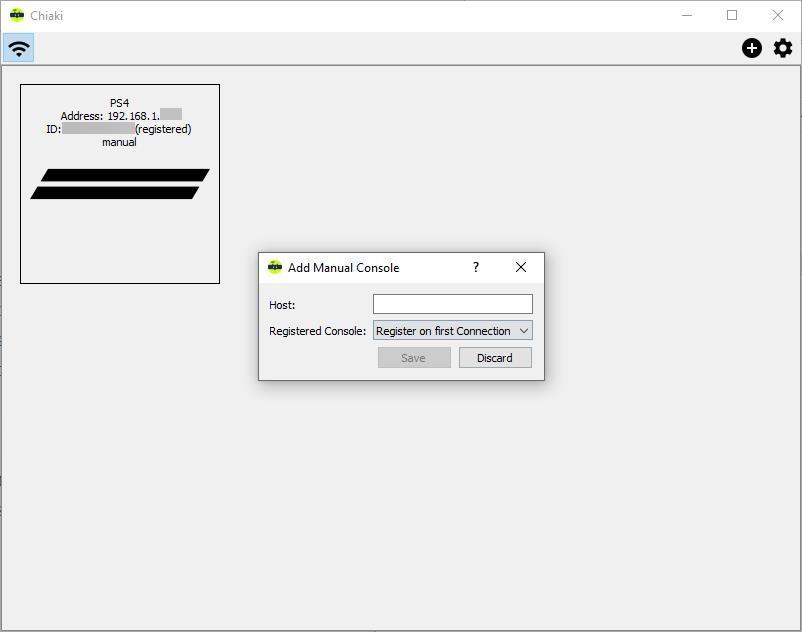 While the official remote play program isn’t bad, it has plenty of room for improvement. Especially when we want to play it outside of Windows. Chiaki is an open source client that allows us to use the PlayStation 4 Remote Play service to remotely connect to our console (both locally and from outside the home) from Windows, Linux, macOS, and even consoles like the Switch.

All its operation is legal, and we must authenticate the program within from the remote use options of the console itself. As for whether it’s better or worse than the official Sony client, it’s all up to taste. Chiaki has more configuration options, which allows us to adjust its operation a little more while the other program is more direct. But, in the end, both use the same protocol and face the same limitations, so the gaming experience will be almost identical.

This is the last and probably the best option to be able to play PS4 games on PC. PSNow is a game service in the cloud (similar to xCloud) thanks to which, in exchange for a small monthly (or annual) fee, we will have access to more than 700 games for this console to play from the computer or from any other device, such as a smartphone or tablet.

The only problem with PSNow is that in order to run these games, you need to have a good internet connection, as well as a PS4 controller connected to your computer. The best thing is that the games run at maximum resolution, and that we don’t have to pay anything else to access all of them. When we get tired, we simply stop paying for the service and that’s it.