As a general rule, today’s computers are not only used for professional purposes, but they are also an important part of leisure. For this we can use multimedia players or games that will make us have a fun time on the PC. However, to achieve this, other elements also come into play, such as DirectX libraries, which we will talk about below.

The first thing we should know here is a software that has been accompanying us for a good number of years to get the most out of our PC graphics. To give you an idea of what we are talking about, we find a series of libraries for Windows especially suitable for graphic work and video games. In fact, it could be said that these elements have greatly influenced the success of games on the PC platform in recent years. Due largely to the years that these bookstores have been with us, over time we have received new versions. Thus, as you can imagine, some error in them or having an outdated version, can cause serious problems when playing. This is something that can also be extended when playing multimedia content on our computer. We tell you all this because the most advisable thing to come to this is to keep the DirectX libraries updated to their most recent version.

Once we know what we are dealing with when talking about DirectX and its functionality, we may wonder how to know the version we have. And this is not just another program that we install in the Microsoft operating system , but it works in the background.

See the version of DirectX that we have on the PC

But with everything and with it on many occasions we should know the version of the libraries in case we have to update them and thus avoid graphic problems. Well, for all this that we tell you, the first thing we will do is open the diagnostic tool of the libraries. This is something that we easily accomplish by typing the command Dxdiag.exe in the Windows search box. It is that we are located in the operating system’s own taskbar.

When typing the command we are referring to, the DirectX diagnostic tool will appear on the screen. As you can imagine, among many other things this application will help us to locate faults in the aforementioned Windows graphic libraries. But that is not what interests us in this case. In order to check first-hand the version of the DirectX libraries that we have on our computer, in this tool we go to the System tab . 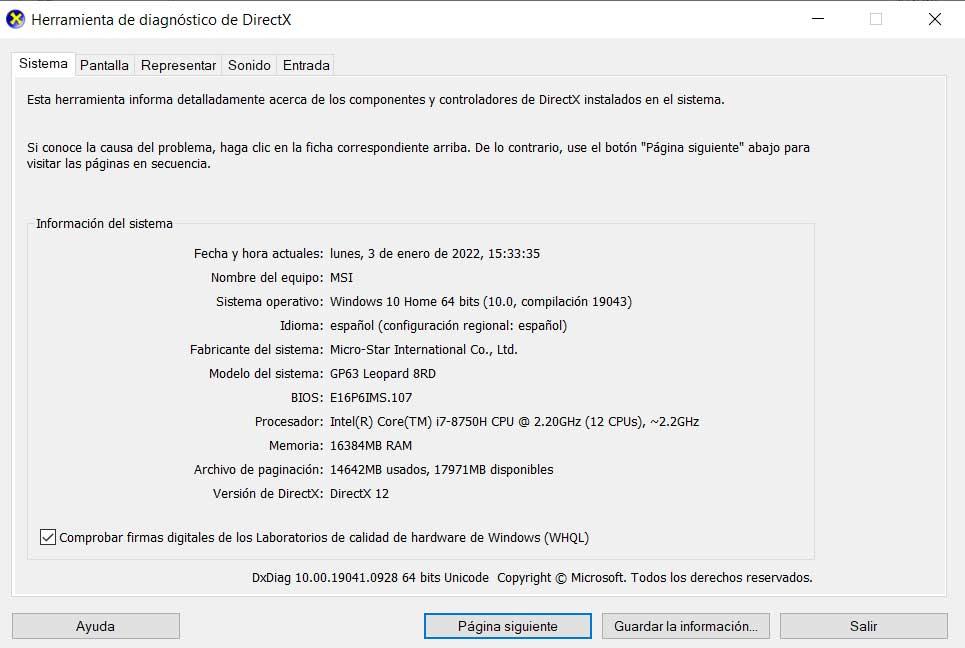 Here we are going to find some information related to both the operating system and the hardware that makes up our team. So we can find out some of the graphics components that we have that we did not know. But at the same time we will have the possibility to consult what we are really looking for here.

We mean that we find a field that precisely shows us the version of DirectX that we have at that time. The most recommended right now is that we have version 12 of these libraries installed, otherwise we should update them.