With the arrival of summer, it is very common to see hundreds of groups of people crowd the hundreds of thousands of beaches around the world. Unfortunately, many of these people take a lot of things with them to the beach and then leave them lying there and do not recycle them , contributing to dirtying the beaches and damaging the environment. In fact, many of these residues can end up in the water and contaminate it, or even be ingested by an animal. Luckily, a company has created a robot that, thanks to the use of Artificial Intelligence, collects cigarette butts from the beach.

Robots are gradually becoming an invention used by various companies to carry out different jobs in order to save time and even costs.

A new function for robots

A couple of inventors decided to create this Microsoft robot that has a structure that is very reminiscent of the robots that NASA uses on the Moon, for example. It has a series of robotic arms that will allow you to take the trash from the beach and very inflated and large wheels that make it easier for you to move through the sand and not get stuck.

The robot has a measure of just over 75 centimeters high . This machine is specialized in collecting cigarette butts, which contain very toxic substances. 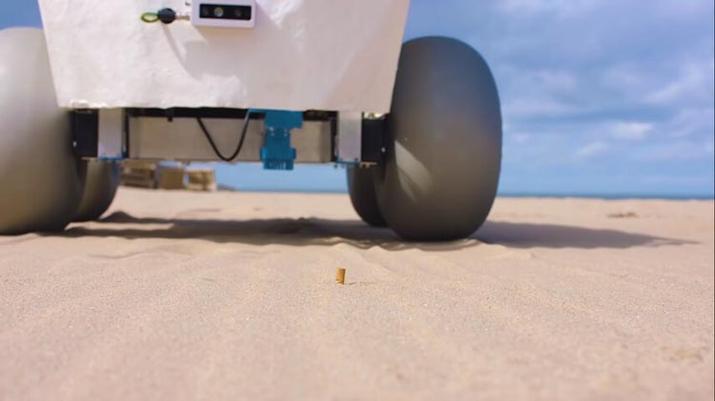 Its operation is achieved thanks to its Artificial Intelligence system. Like other similar systems, the robot uses a series of imaging systems that allow it to differentiate between what is garbage or what another item such as towels, flip-flops or an umbrella, for example.

Your performance will improve over time

At the moment it can only take cigarette butts , but it is hoped that in the future its internal system can be further optimized so that it can collect other types of waste. As more images are added to your system, your system can start working better.

This machine made its debut last year on a Dutch beach, and managed to remove a total of ten cigarette butts from the beach in a period of thirty minutes.

Although it is true that a person could do the same work as this machine, as their systems are improved, their performance will also improve, being able to work at a faster pace and better locating the butts.

It would be more important that we all collaborate to recycle and make our planet a pollution-free place, which would make the creation of these robots unnecessary. However, this is unfortunately not possible.