Microsoft PowerToys are a set of open source tools designed to improve the way you work with your computer. The original first version of these tools dates from the Windows 95 era, although, after decades of neglect, Microsoft decided to bring them back to life, completely revamp them, and improve all their functionality in Windows 10. In this way, these PowerToys have been become a must-have for many users when working and using the PC. And, very soon, we will see a new, and long-awaited, tool that will become part of the suite: Video Conference Mute . Earlier this month, Microsoft released version 0.45 of these PowerToys . This version did not stand out for anything special, but it was a maintenance update focused on correcting errors and improving the general design of the appearance of the program menu according to the appearance of Windows 11.

Before the release of the next stable version, which will be 0.47, Microsoft has released a new experimental version of its program, 0.46 . And this once again brings us the long-awaited tool to control the camera and the video conferencing microphone with simple keyboard shortcuts.

This new tool is not exactly new, far from it. Although the ideal time to launch it would have been around April 2020, when people started working from home because of the pandemic, Microsoft did not present for the first time until the spring of this year. However, since then, it has done nothing more than appear and disappear in the versions, never being ready.

What this tool does, broadly speaking, is create 3 new keyboard shortcuts :

In addition to working with keyboard shortcuts, it also allows us to enable a quick access bar on the desktop from which we can toggle the status of these elements. 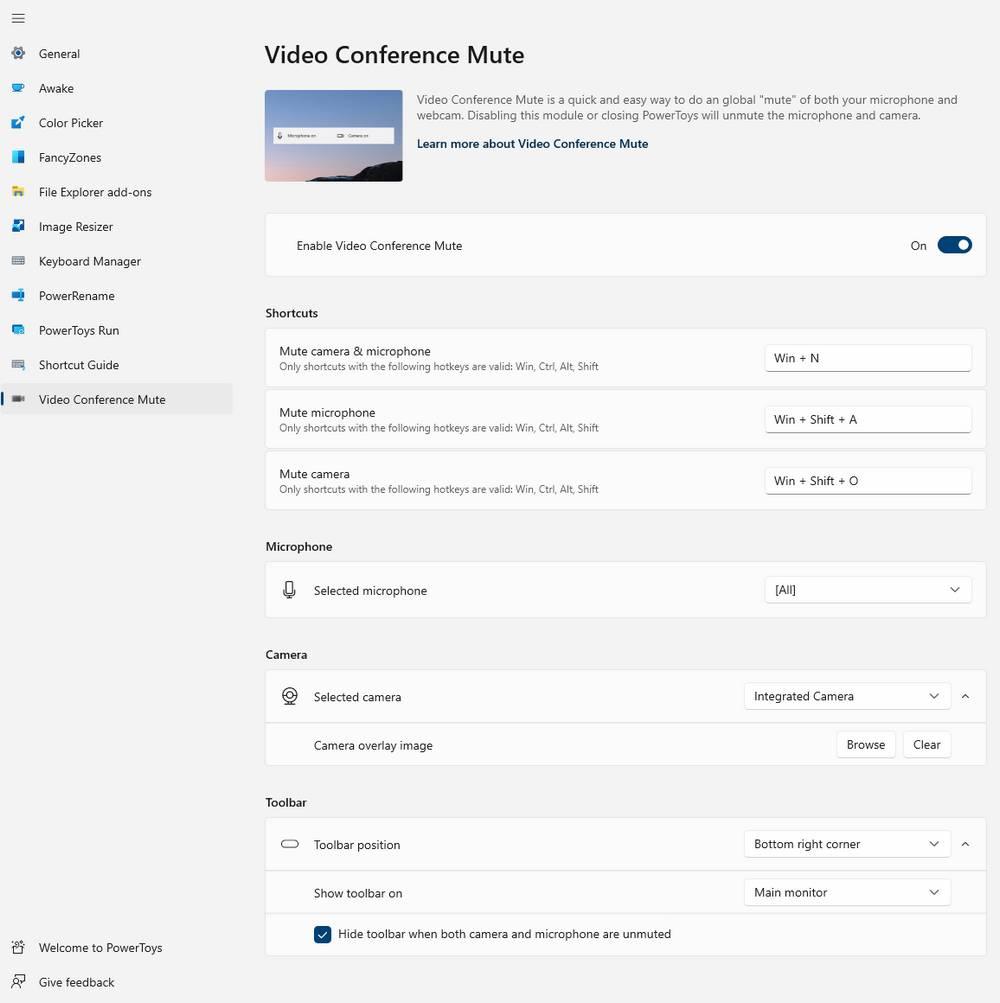 Again, Microsoft will use this experimental version to test the operation of the new Toy to give us more control over video conferencing and see if users are really interested in it or not. If all goes well, the next stable update of these PowerToys may finally bring the Video Conference Mute tool. Or maybe not, that can only be decided by Microsoft.

How to test (again) this new toy

At the moment, Video Conference Mute is only available for users who want to try the experimental version of this program. Therefore, we only recommend trying it if we really know what we are doing and are willing to assume that we may have certain problems and errors.

Version 0.46 of these PowerToys can be downloaded for free from the following link . If we already have a previous version installed, such as the latest stable 0.45, this will be installed on top of it. If we have not installed these tools before, they will be installed from scratch and, once the installation wizard finishes, we can start using them.