Applications for making video calls are constantly on the rise, which allow us to be in permanent contact with other people, which is why it is very useful both on a personal and professional level. Microsoft has Themes as its professional video conferencing application that stands out for its good quality. However, one of its few drawbacks is that it can also be used to receive unwanted calls.

The possibility of making SPAM calls is very annoying for Teams users, Microsoft knows it, and for this reason it is introducing new capabilities integrated into the application that we can use as protection when receiving unwanted calls. This new function is expected to be ready at the end of this same month of August. Spam calls will end in Teams

The spam identification feature was officially announced by Microsoft in December of last year, although it is not until now that it is expected to see the light of day for the Microsoft 365 Teams collaboration platform. Thanks to this update, the application will automatically identify possible calls from suspicious numbers that we receive, alerting us that we are receiving, possibly an unwanted call.

To do this, this function will automatically show us an alert label that will be labeled as “probably spam” , so that each user can decide if they want to answer the call. Along with this, Microsoft Teams will be able to certify all outgoing calls so that they are not rejected as spam by external recipients. Additionally, all calls classified as “probably spam” are marked as reflected in the application’s call history list. This will take place, whether the call is answered or rejected.

Available this same month of August

As explained by the company itself in the Microsoft 365 roadmap, this new alert function on unwanted calls will begin to be implemented at the end of this same month of August . At the moment it is still in development status and is expected to be available to Microsoft 365 Teams customers, whether they are users of the desktop version or the web version.

This new protection feature against phone SPAM should help users save time when rejecting unwanted calls that may hinder our workflow. The update will be enabled by default for everyone, but Microsoft 365 administrators will be able to disable it, if necessary, through PowerShell.

Currently, Teams clients have some features available to prevent unwanted calls. On the one hand, the platform has the ability to block incoming PSTN calls and manage our blocked numbers from the “Edit blocked contacts” menu. We can access it from the “Settings” menu, clicking on “Privacy” and then on “Blocked Contacts”. 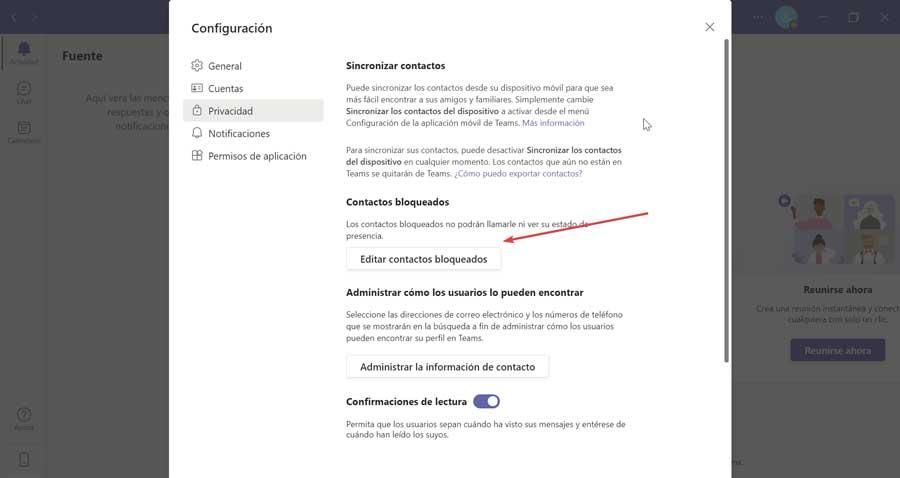 We also have the possibility of being able to block all incoming calls made anonymously by activating the “Block calls without caller ID” function, which we will find available in the “Blocked contacts” section.