Since the release of Windows 10 back in the summer of 2015, Microsoft has been struggling for users to adopt its integrated security solution . However, many are still suspicious of it, opting for the use of other third-party solutions, such as the AdwCleaner by Malwarebytes.

Despite the advances that Windows Defender has been receiving for a long time, many prefer to continue using the software of more veteran security companies. They also prefer the use of certain somewhat more specific security applications, as is the case here. Keep in mind that in these times, the security and privacy of our data is paramount. Taking care of what we store on our computers, especially important or sensitive files, has become basic. That is why companies dedicated to it, do not stop improving their products, as now happens with the aforementioned AdwCleaner tool from the Malwarebytes firm. This is a solution that over the years has gained a good number of followers around the world. This is largely due to the functionality it is able to offer us. But now, from what is being released, the tool is about to become even more popular.

This is mainly due to the fact that this program can now be used in its entirety from the Windows command line. For those who don’t know much about this security alternative, say that AdwCleaner focuses on the removal of adware , PUP, spyware and browser hijackers. It was originally developed independently, but was eventually acquired by Malwarebytes. Thus, today the company continues to improve it due to its popularity, as we can see.

Also, initially, since AdwCleaner was launched, it could only be used with the Windows graphical interface. But many of its regulars have long been asking for a function that allows it to be used from the command line. Thus, since the release of AdwCleaner version 8.0.6, Malwarebytes has finally added this command line support. 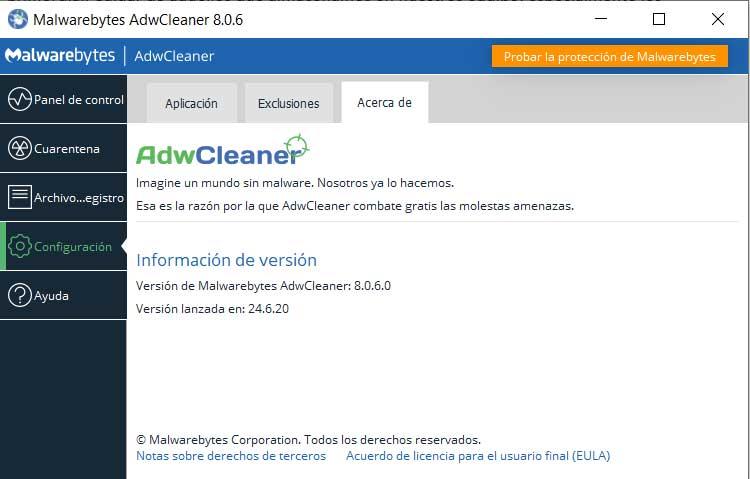 After installing the latest version of the security solution, users can now use it through login scripts or batch files. Similarly, the program can be used through a scheduled task, all from the command line itself.

So you can use AdwCleaner from the command line

For another important action in this regard, clean the computer and restart it if necessary, the command : adwcleaner_8.0.6.exe / eula / clean / noreboot would be used. Meanwhile, if we also want to remove the pre-installed programs, we can add the / preinstalled parameter. Of course, this is a parameter that must be used with care, since it can eliminate some of the pre-installed programs that we use regularly in Windows .