Among the cheap mobile options that we find in the market, Xiaomi has a large repertoire of options and LG continues to be one of the companies that transmits the most security to users. This time we are going to compare the LG K40 and the Xiaomi Redmi 7 , two smartphones that do not exceed 150 euros and have a lot to say in their characteristics.

There are those who still prefer cheap mobiles because among some reasons, their size has not increased as much as the mid-range or high ranges and these two smartphones are a good example of this. We get to know the two models, both inside and outside with several differences. 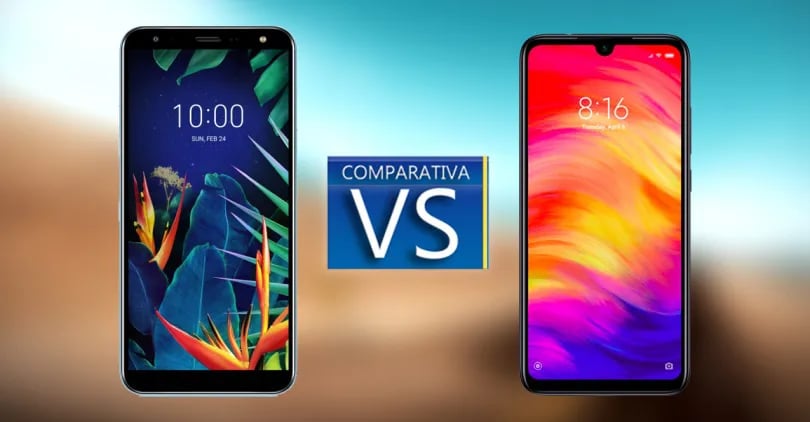 When we find two models from the entry range, the material with which they are made on the outside is plastic , a classic that in the chaos of the Xiaomi Redmi 7 incorporates the fingerprint reader and double lens on the back. one of the sides, adding a U-shaped notch for the front front camera and minimally used frames. The LG K40 in its rear also adds the fingerprint reader, with a single lens in the central position and no notch in front, with frames that are quite large. The LG K40’s screen is a 5.7-inch LCD in HD + resolution , sharing technology and resolution with the Redmi, although in this case with 6.26 inches . As for size and weight, Xiaomi’s proposal is greater, reaching 180 grams and which contrasts with just 144 grams for LG.

In the section of the processors and the equipment, LG bets in its low range for the Mediatek Helio P22 , a reliable processor that works at 2 GHz. Before this the Xiaomi Redmi 7 bets for the Snapdragon 632 that we should not be fooled by the frequency clock 1.8 GHz. Both terminals will be able to offer us good results in basic applications if we do not demand much. In its equipment we find 2 or 3 GB for the LG K40, with a single option of 3 GB in the Redmi. To save our applications, photos and other content, we have in both models only 32 GB that seem short, although in both we can add a MicroSD card.

Although we can not demand too much photography equipment in such a limited price range, the Xiaomi Redmi 7 offers us a somewhat more complete option by adding two 12 Mpx and 2 Mpx lenses on the back with the intention of improving portrait mode. However, the LG K40 bets on a single 16 Mpx lens that, using artificial intelligence, will improve our photographs. On the front with 8 Mpx in both cases, but an aperture f / 2.0 for the Redmi and f / 2.2 in the LG K40, we can not demand much more than sharpness when taking photos during the day. As for video recording, we have a digital image stabilizer in both and auto focus. Highlighting LG’s proposal to add optical stabilizer to a low-performance smartphone.

We go on to talk about the battery, one of the most relevant sections when buying a mobile and that in the proposal of the LG K40 integrates 3,000 mAh , somewhat short compared to the 4,000 mAh that integrates the Xiaomi Redmi 7. Only the Xiaomi Redmi 7 integrates charge fast and that makes it victorious in the two main reasons in this section.

In connectivity we can not ask for much, although we have the main and essential in both cases by adding Bluetooth 5.0 LG and 4.2 the Xiaomi model. Both have an audio jack and only LG adds the NFC that we use more and more often.

On the LG side we find Android 9 Pie with practically no add-ons but quite a few changes in its customization layer called LG UX . Before this, the Xiaomi Redmi 7 has MIUI 11 , the latest version of one of the most acclaimed customization layers and that most users want. Its additions and battery optimization makes Xiaomi in this case unrivaled. It is time to talk about prices, where we will have to make a decision according to what we have known about both mobiles. The LG K40 reduces its price to 114 euros , a very interesting proposal to save a pinch before the 145 euros of the Xiaomi Redmi 7, which in our option is a better purchase. The battery, the operating system and the cameras make us save a little more. Finally we leave you with the table in which you can know each of the sections.