The launch of the Core 12 has revolutionized the world of PC CPUs for its excellent performance, however it is not the only option on the market and the AMD Ryzen 5000 are also there. That is why we have prepared a comparison between the i7-12700K from Intel and the Ryzen 7 5800X from AMD. The so-called mid-range of Intel and AMD PC processors is currently represented by the i7-12700K and the Ryzen 7 5800X, the former based on the Alder Lake-S architecture and the latter based on Zen 3.

First of all we have to talk about the points where both CPUs differ and the first thing that stands out is the heterogeneous architecture of the i7-12700K with 8 P-Core performance cores and 4 efficient E-Core cores, which makes the The total number of cores is 12. On the other hand, the Ryzen 7 5800X has only 8 Zen 3 cores inside that would be comparable to the 8 P-Cores.

Another thing that the AMD CPU has to deal with has to do with the distance between the CCD Chiplet and the IOD, since not being a monolithic chip this adds latency in the execution of the instructions. In any case, the advantage for AMD when opting for this type of configuration is that it allows them to have designs with a greater number of transistors and without the associated problems that occur when increasing the size of the chip. 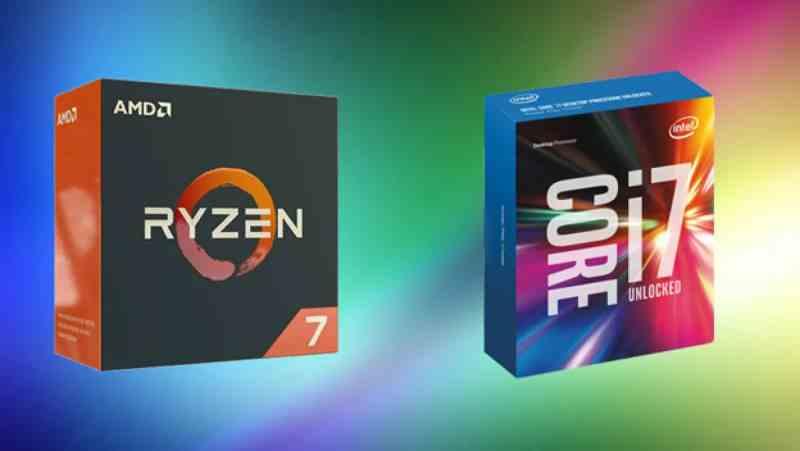 In any case, we repeat what we always say: benchmarks measure the performance of processors at specific points and not in global power. Its use helps us to get a rough idea of the performance improvements that we can experience both on one processor and another when running everyday applications. So they help us get an idea in which parts both Intel and AMD have strengthened their processors. 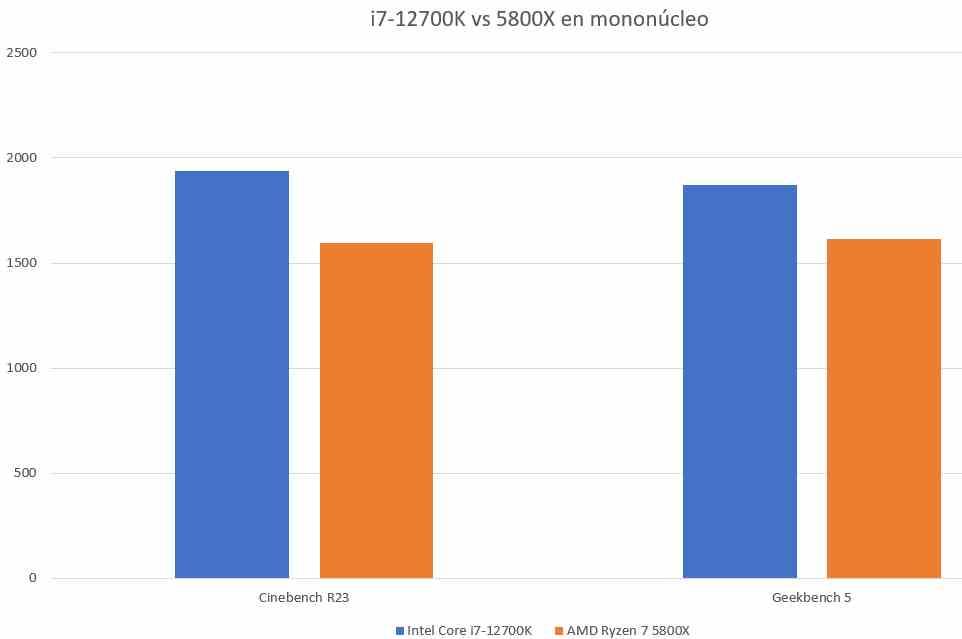 Starting with Cinebench R23 in its single core test the i7-12700K scores 1,939 points while the Ryzen 7 5800X reaches a score of 1,594. So the Intel processor gets a 21% advantage over AMD’s. The other benchmark that we have chosen is Geekbench 5 where the i7-12700K manages to reach 1872 points, while the AMD processor achieves 1614. In the second case the difference is tighter and although the Alder Lake-S wins by a 16%.

In this part we have nothing more to say, since the figures are clear. Let’s not forget that Intel has released two generations of its Intel Core in the time in which AMD has had its Ryzen 5000 on the market, so the company now led by Pat Gelsinger has had the opportunity to make two improvements in this regard in a single year. 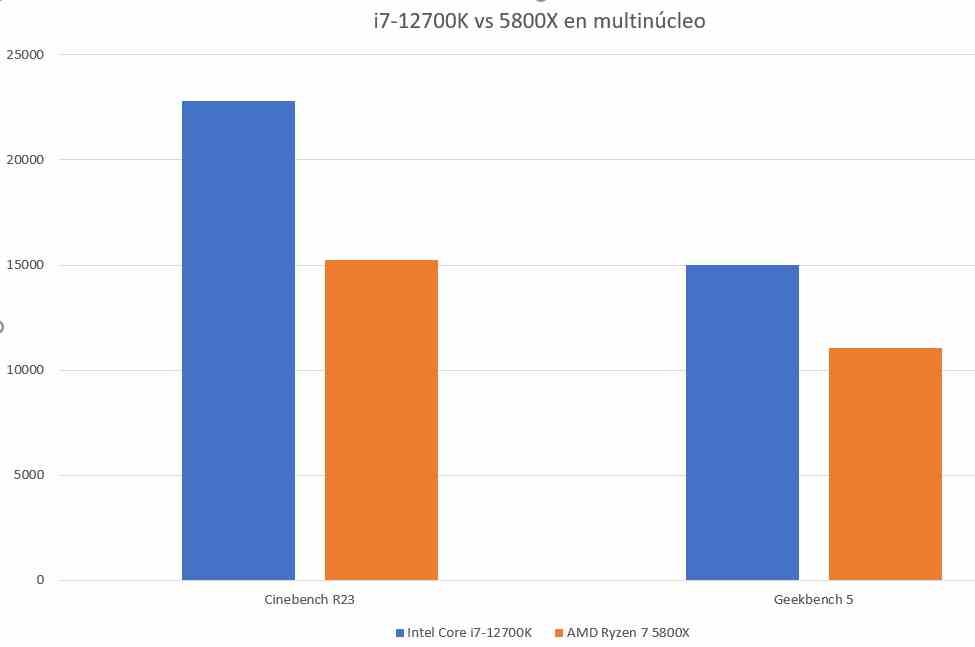 But the programs not only have parts that work with a single core, but there are parts that run with several cores in parallel and that is why we are also interested in knowing the performance of both processors in this regard. In Cinebench R23 we find that the i7-12700K reaches 22,812 points and the 5800X under the same test at 15,245, which translates into a 50% difference in favor of the Intel Core 12. On the other hand, in the multicore benchmark of Geekbench 5 the middle sister of the Alder Lake-S achieves a score of 14,992 while the Ryzen 7 based on Zen 3 reaches 11,078 points and therefore a difference of 35.33%.

With the same cores, the difference in multicore work should be the same as with a single core, but we must bear in mind that the E-Cores add up when executing applications in parallel and give the i7-12700K an advantage, of There, the delta between both processors is higher, since there are more hardware resources to distribute the different threads of execution. 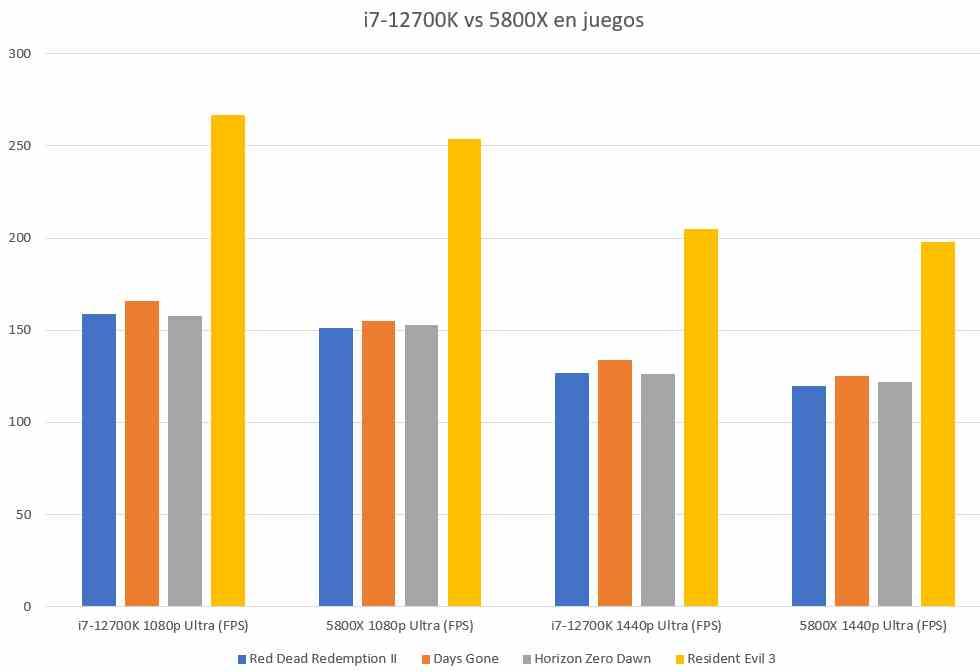 In any case, as we have said, benchmarks are not applications for everyday use and video games, due to their extreme use of hardware, are a good way to measure the performance of a CPU.

Let’s not forget that a game is nothing more than a continuous loop, in which the first agent to act is the CPU and therefore its performance will affect the rate of frames per second. Although for the comparison to be fair we have to use the same configuration of RAM and graphics card. That is why in all the games that have been put to the test, an NVIDIA GeForce RTX 3080 with 10 GB of VRAM has been used as a graphics card and a Corsair Vengeance RGB Pro DDR4 at 3600 MHz in a dual channel configuration as RAM. with 64 GB capacity.

The results can be found in the graph that accompanies this section and, as can be seen, the i7-12700K takes advantage of all of them compared to the 5800X, although the differential is less than that observed in the benchmarks that we have commented in the previous sections. Nor do we want to be accused of justifying Intel, but we must bear in mind that in the assignment of the different functions to the CPU, at the moment there are no games that have been optimized for the use of a heterogeneous processor such as Intel Core. 12, so we cannot know if one of the threads has fallen into one of the E-Cores.

We are faced with two processors that are very on par when it comes to running games today, since very few use more than 16 threads, which we believe is the reason why the performance between both processors it ends up equaling itself in the tests of the games.

Which of them do we recommend? Well, it depends on the situation, since if for example you have a board with an AMD A320 chipset, from the 400 or 500 series, then our recommendation is that you go for the AMD Ryzen 7 5800X processor. On the other hand, if your goal is to make a clean slate and you want a platform more thought for the future thanks to its support for DDR5 memory and PCIe Gen 5 then bet on the i7-12700K.

In closing, we think that as software developers get the hang of the heterogeneous cores of Intel’s architecture, their advantage will grow as time goes by.