Security on our computer is essential for most users, so we use certain specific programs that take care of all of it. This is the case of antivirus, for example, as it happens with the Bitdefender alternative that we will talk about in these same lines.

And it is necessary to take into account that in current computers and mobile devices, we work with a greater amount of our own and sensitive data. That is why, as we mentioned, we usually use specific programs in this regard, as is the case with antivirus . These programs in particular are very helpful in protecting the computer, operating system and stored data. Keep in mind that Windows 10 itself has an entry with its own security solution in this regard, Windows Defender. However, there are still many users around the world who prefer to use external third-party solutions, such as the aforementioned Bitdefender. Therefore, once these programs reach users’ computers, some may think that everything is already done, but it is not.

And it is that just as it happens with the rest of the programs that we install on any computer, antivirus programs need to evolve over time. So, as you know, these software solutions, like any other, need to be updated regularly. This type of specific actions are carried out both to add new functions that are developed, and to cover possible security flaws that appear. That is why it could be said that these software updates are even more important in the antivirus that we are talking about here.

Update Bitdefender to be protected

Once we know all this, the first thing we must take into account is that we need to have the latest version of the antivirus at all times. Thus we will have the most recent functions that the developer will be launching. Say that this is a process that the program carries out by itself, since it is its developers who automatically send the latest versions of the program .

On the other hand, in the event that we have to start working with the program from scratch, we will have to download it from its official website . 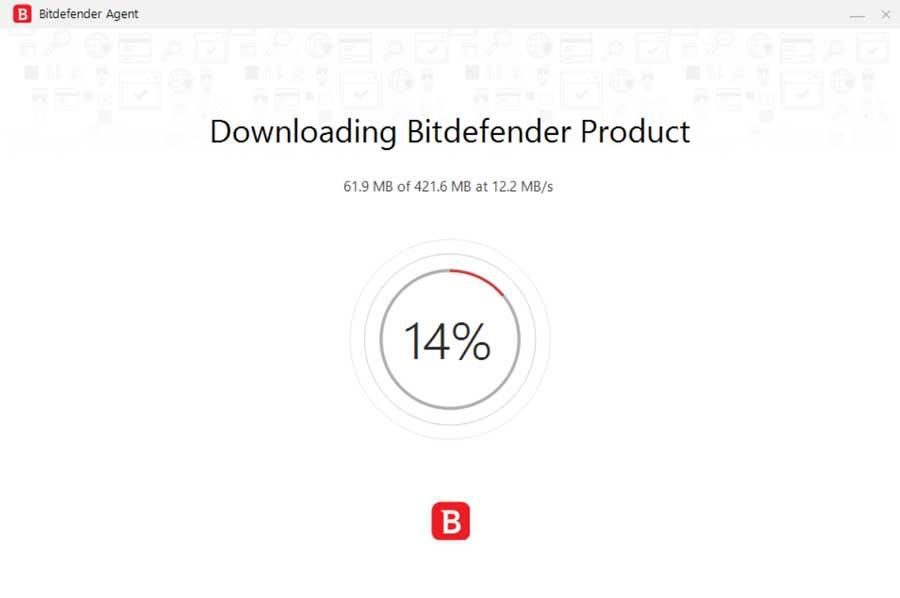 It is worth mentioning that this security solution, once we have downloaded it, is installed like any other Windows program . Thus, we will only have to double click on the previously downloaded installation file, to start the installation as such. This is something that takes a few minutes, and after registering our Bitdefender account, we can use it. Of course, something that we must keep in mind is that this installer that we downloaded from the official website, corresponds to the latest version of the application , as expected in this case.

Update the database in Bitdefender

Unlike the usual programs that we use on our Windows computer, to keep antivirus updated, it is not only going to be necessary to update the program as such. Keep in mind that attackers are constantly launching new malicious code, so security companies must be vigilant. That is why in addition to updating the program , in an antivirus we must also update its internal database. This is something that should be done every so often, as it is easy to imagine.

Therefore, in the case that concerns us here, Bitdefender, let’s see how we can control and customize this update process, once installed on the PC. Thus, the first thing we do in this case is to access the main interface of the program. 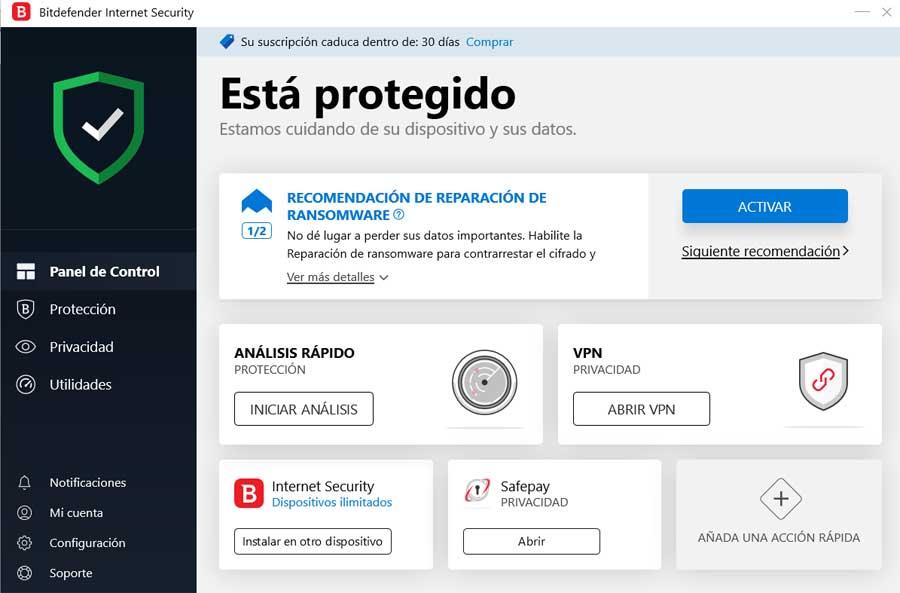 In it we see some of the most important functions that are part of the protection systems of this security solution . However, the direct access that interests us in the case at hand is found in the left panel. Specifically, if we take a look at the bottom of it, we will see a button in the shape of a gear wheel, where we click.

This will give us a new window where we find various parameters, all of them related to the configuration and customization of the software. Well, in the case that interests us here, we must go to the tab called Update. 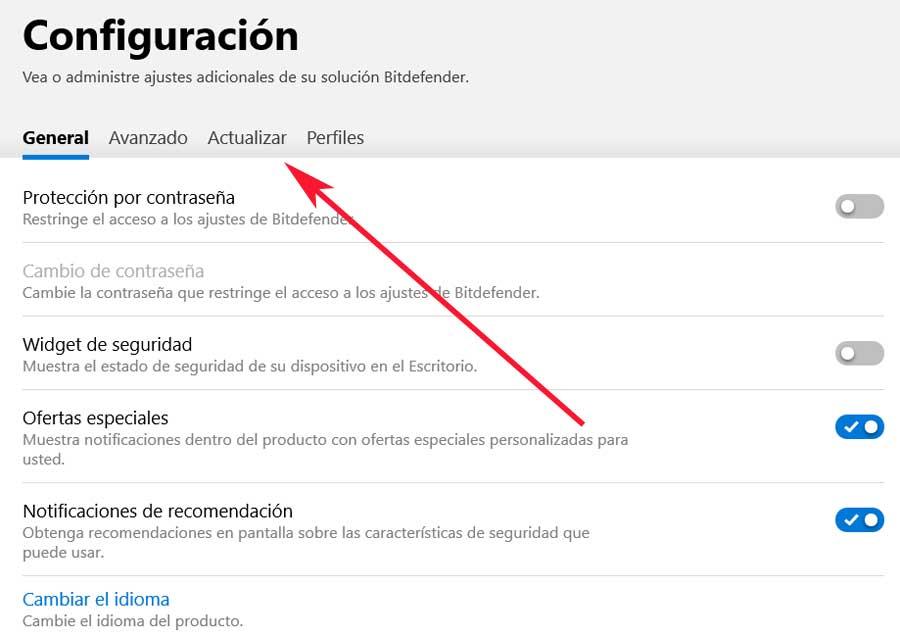 Therefore, this is precisely where we are going to find the section dedicated to the control and updating of the antivirus database. Thus, the first thing we find is a control that allows us to disable automatic updating of the database for a certain period of time. In this way we can do it at certain time intervals, or directly until we restart the PC. 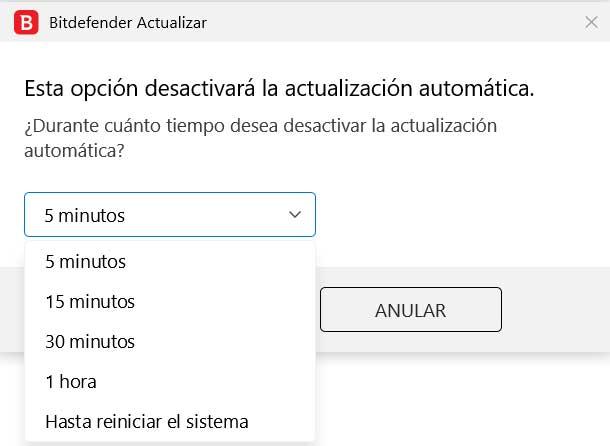 Anyway, in most cases the most recommended is that we leave this option active, since this way we will have the Bitdefender database updated at all times. A little further down, we find a scroll bar that will allow us to set the time period for new updates of this type to be searched. The minimum will be one hour, so it may also be the most recommended value to be fully protected. 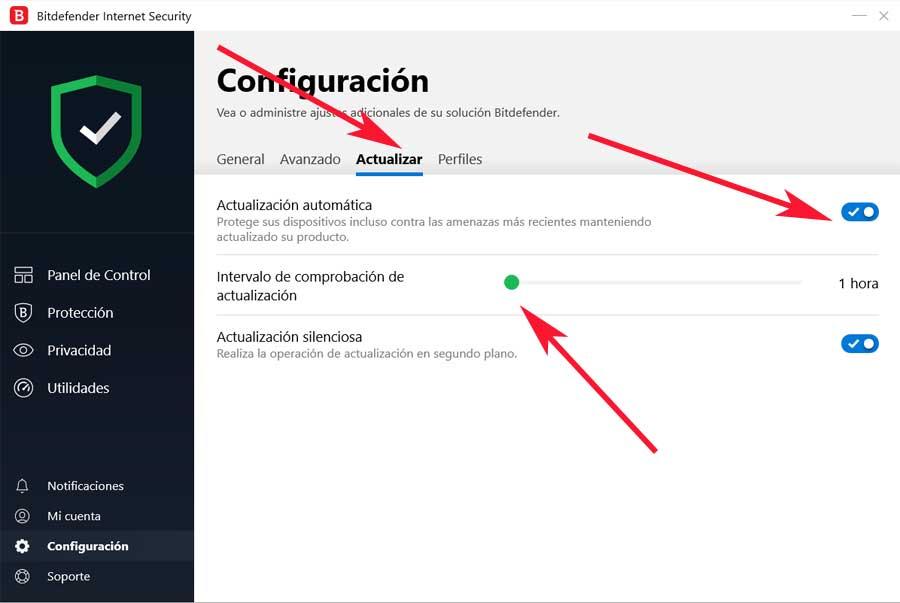 And finally, regarding this same topic, we can also make these updates take place in the background silently, or the program asks us before. This, as with the rest of the parameters described, will allow us to have almost complete control over the updates of the antivirus database. Of course, we must bear in mind that these database updates are not usually very heavy. We say this because configuring this to be done in the shortest amount of time, and in an automated way, will increase the security of the program as such, since it hardly takes time. At the same time it also decreases the chance of being infected.