When we work regularly with a laptop, the advantages we have compared to doing it with a desktop are many. It is true that in general terms Windows behaves in a similar way, but not everything is positive in this regard.

There is no doubt that one of the favorable points that a laptop presents us with respect to a desktop, is the mobility it gives us. This is something that becomes especially important if we are constantly on the move, or if we use the PC anywhere. As is logical to think, in this type of situation a laptop is always the best option. But of course, not everything was going to be advantages in this sense, since we also encountered some limitations.

Perhaps one of the most important here is those that refer to the autonomy that we will have. You already know that one of the main components of this type of equipment and on which that autonomy also depends, is the battery that it includes. This is an element that we must try to take care of as much as possible, although little by little it deteriorates over time.

Windows allows you to control autonomy in laptops

At this point, it should be mentioned that Windows itself presents us with a series of default features that allow us to control the battery. Thus, for example, we can quickly and easily know how much is left at any given time. To do this, we just have to move the mouse pointer over the small icon in the shape of a battery that is located on the taskbar.

Here a message will appear that lets us see the percentage of remaining battery , or the autonomy time. At the same time we have the possibility of double-clicking with the mouse on that same icon that we are commenting on. In this way we will have some more information of this type, in addition to being able to adjust the performance of the PC. This will allow us, if we need it, to increase the autonomy of the equipment, lowering its performance a little. 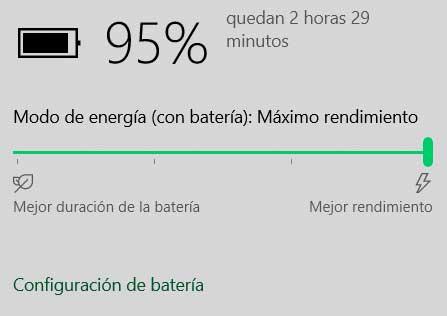 On the other hand, the operating system itself presents us with several additional options that will allow us to adjust the duration of this component . But that is not the issue that concerns us here, but a failure that we can find many times related to this information on autonomy in Windows . We tell you all this because it is possible that on some occasions we have encountered a somewhat strange failure. And it is possible that our laptop shows in Windows that the charger is plugged in, but the percentage of the battery does not increase. As you can imagine, this error can lead to confusion, so we are going to show you how to solve it.

Solve the fault with the autonomy indicated in Windows

To begin with, we will tell you that what we are talking about may be due to a malfunction of Microsoft’s own software . It can also be the case that the battery is already old, so it is charging too slowly and we think that the percentage does not rise. On the other hand, we must also consider that the laptop charger is defective and we have to change it for a new one. Be that as it may, there are several reasons for this, as well as the solutions available.

Shut down or restart Windows

To begin with, we will tell you that sometimes just restarting the laptop can solve this problem in particular. Thus, what we recommend here is to click on the Windows Start menu, from where we can turn off and turn on the laptop while it is still in charging mode to see if that solves it. If not, we can also use the so-called complete restart of the device. The previous step could be said to be a reset, but now we are not only going to restart the operating system , but we are going to carry out a complete restart. 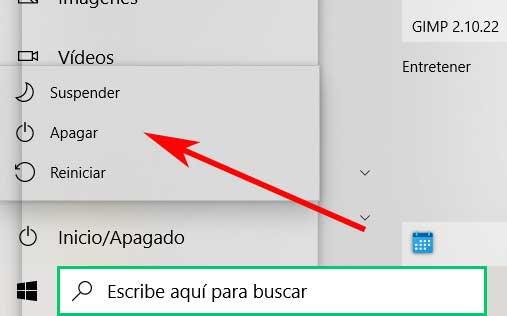 Do a hard reset of the laptop

For this, the first thing we do is unplug the charger from the electrical outlet and then turn off the laptop. After that, we open the lid of the equipment and, if possible, extract the battery as such. Thus, when the battery is no longer installed, press and hold the computer’s power button for a few seconds. Then we can put the battery back in place and turn on the PC again. Another step that we carry out is to plug the charger into the mains .

Now, in the event that the above steps don’t fix the battery charge percentage issue, let’s take a look at the drivers. Specifically, what we are referring to is uninstalling the battery controller and then reinstalling it in the system. Bear in mind that the problem may be caused by a faulty or damaged controller. Therefore it is worth mentioning that a reinstallation of these drivers could solve the problem.

Thus, to achieve this that we are commenting on, the first thing we do is unplug the charger from the electrical network and open the Device Manager . We can do this by right-clicking on the Start menu. Once the controller window appears, we must locate in it the input that corresponds to the battery. 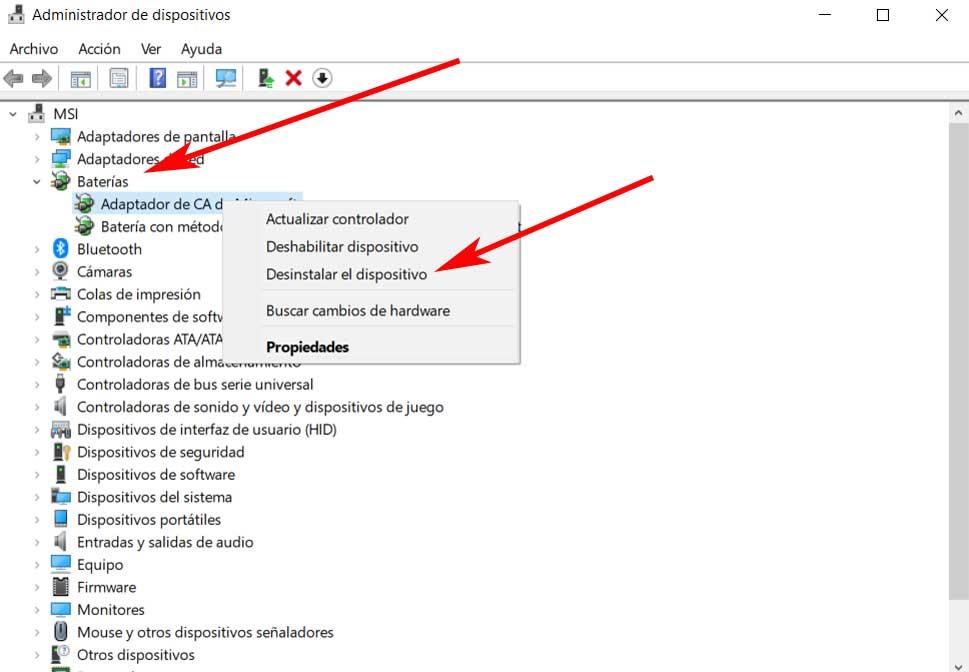 Therefore we must click with the right button on them, where we select the option to Uninstall the device. We do this for all the inputs that correspond to the adapter or the battery. Once we confirm the deletion in Windows, the process of deleting the drivers will be carried out . Therefore, we then only have to restart the computer for Windows itself to install them again. It should be mentioned that this is something that will be done automatically, which should already solve the problem that we have discussed here. Say that this is a bug that occurs more times than we would like.