Apple smart speakers, like any other electronic device, are not without problems. And there are also many possible failures: software, hardware, derived from misuse, due to a factory defect … Now, how much does it cost to repair a HomePod? What options does Apple give for this? In this article we tell you everything you need to know if you have to take your speaker in for service (or if you are just curious about it).

Something you should know is that the Cupertino company does not always repair its speakers as such. Sometimes the repair is not accepted when the conditions of the loudspeaker are very bad and it is recommended to buy a new one considering it unusable. Although these cases are in the end more isolated, since what normally happens is that the speaker is not repaired for this purpose at the moment, but you are given a reconditioned model identical to yours that will be fully functional. 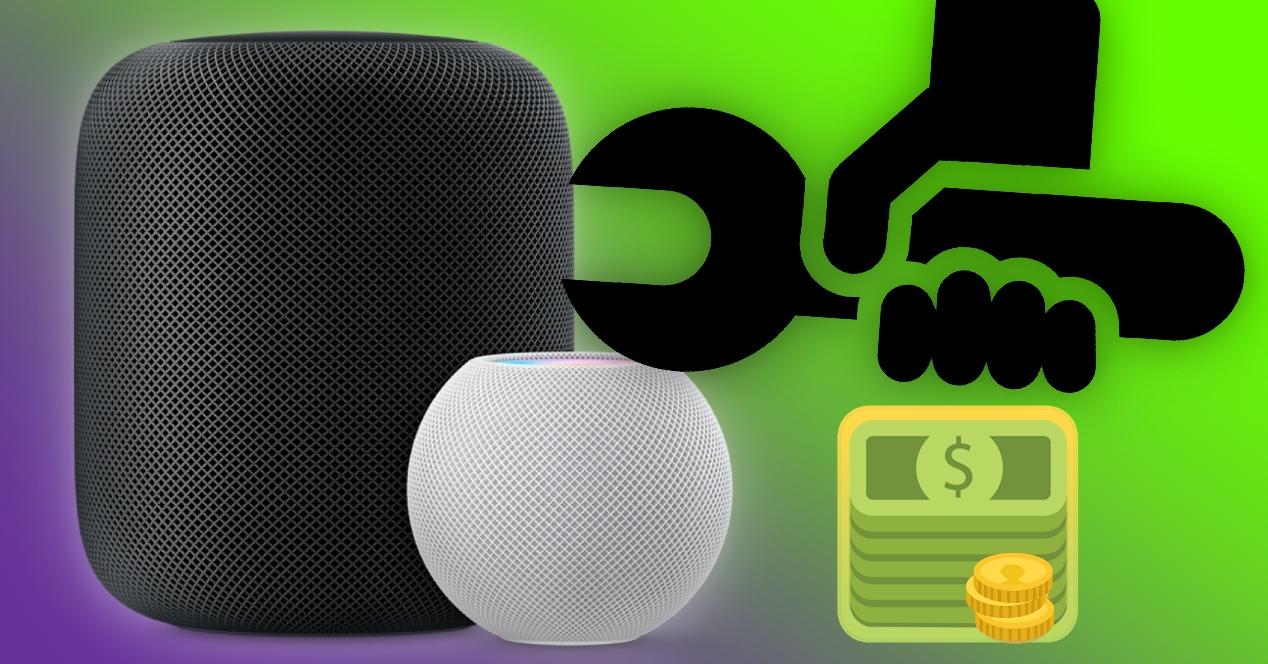 The reason that it is not repaired even when they are “easy” repairs is often due to the lack of stock or personnel in the store who can carry out said repair. The company ends up being more profitable to give the consumer that replacement HomePod and take theirs to another establishment (sometimes even in other countries) so that they can repair it and leave it functional so that in the future it can serve as a replacement for others. This also serves to speed up waiting times, since otherwise it could mean that the customer has to wait days or even weeks. The times when it’s free

It is not a bargain or any scam or anything similar. There are certain occasions in which the repair can be done at zero cost, although for this a fundamental factor must be met: that the HomePod is under warranty and the problem is covered by it. Normally it occurs in cases in which due to a factory defect the device does not work correctly, although if it is detected that the fault has been aggravated or has its origin in its misuse, you could lose the right to said free repair. However, it is usually quite permissive in this sense, since they are usually bugs that come in a certain batch of products and can appear to more users. In any case, it is not widespread and so far there has not been the case of any very large batch of HomePods that have accused a serious problem that falls within this quota.

Due to what we mentioned at the beginning regarding the repair method for HomePods, Apple does not have a price catalog based on which component has failed. It takes it into account as a single device and admits only one repair price, having the following depending on the model: Different prices if you have AppleCare +

AppleCare + is Apple’s extended warranty service available to virtually the entire range of products it sells under its brand name. In the case of the HomePod, it is used to make repairs cheaper, so if you have it hired you will have cheaper prices than in the previous case: Other types of services offered for repair

The most common and even recommended in many situations is that you take the HomePod to an Apple Store, having previously made an appointment. However, it also offers the possibility of doing it without having to go to the establishment.

This repair has the same prices as those you have in an Apple Store (those discussed in previous sections). However, the method is different, since they will first have to pick up your HomePod at home through a courier service that will take it to Apple’s technical service. Once they receive it and verify the problem, you will be notified to accept or not the repair, with a final budget included. If you accept it, the repaired or replacement HomePod will be sent home and if you deny it directly, yours will be sent to you without having been repaired (and at no additional cost). In any of the cases, they allow you to check the status of the shipment and others through their website and support application for iPhone and iPad. This service also works from home and is designed to prevent you from running out of HomePod and to have a fully functional one. You just have to request it and a replacement HomePod will be sent to your home, having at that moment to deliver the damaged one to the delivery person. Of course, you are charged the value of the speaker as a deposit (329 euros for the HomePod and 99 euros for the ‘mini’). After that, the operation is the same as the previous one, since the device will be taken to a repair center where they will verify your problem. If you did not deliver the damaged HomePod or do not accept the repair, you will be charged the full amount previously charged as a deposit. If you finally accept the repair, the difference will be deducted from what you already paid. Can your home insurance cover it?

It will largely depend on the type of insurance you have contracted. As well as HomePod insurance made by third-party vendors , since these speakers are sold in some non-Apple stores and they offer their own insurance. In either case, you should check the conditions by viewing the contract you signed or, failing that, by contacting the insurance company to confirm it based on your policy. As a general rule, when they are covered, the modus operandi that you must carry out is the same as if you did not have insurance: take the HomePod to Apple or request the repair from home. Once the device has been repaired, you will have to request an invoice to present it to your insurance company and have it paid in full or in part (depending on whether it is previously agreed based on the conditions of the contract).

Estimated time it will take to repair it

Unfortunately there is no estimated time to carry out this repair. It will always depend on various factors such as the saturation that the technical service may have at that time, if they have stock of the product, the time of year in which it is and if there are holidays in between … Going to an Apple Store you could even have it in the day or within approximately 5 days if they do not have stock. If you request the repair from home, the times do increase, with at least an average week in the normal repair and with 1-3 business days to receive the new HomePod if you requested the express repair. In any case, all these are approximations, so it is recommended that you consult Apple when requesting assistance to know if they can give you any more precise information in this regard.

So far we have only referred to Apple itself as a manufacturing company, although there are so-called Authorized Technical Services known by the acronym “SAT” that act in the same way in terms of conditions. When you request assistance from Apple, you can find a list of these establishments, which have original parts and authorization from the company to act on their behalf. The prices are sometimes usually lower, but as a general rule you will find procedures and prices very similar to those of Apple, being an advantage only if you do not have an Apple Store nearby. About taking it to unauthorized services

Another possibility that we find is that of third-party stores that offer repairs for HomePod. These are usually very tempting because sometimes they offer cheaper prices for it. However, you must bear in mind that you will lose the warranty with Apple if you go to an unauthorized establishment. It is also likely that they do not have original parts to carry out the repair, so in the end the quality of the speaker could be affected. It is not recommended for these reasons to go to them, although if you decide to do so, we recommend that you check the conditions carefully and check if they offer you any type of guarantee with them in case the fault is not solved or someone else may appear as a result of the repair. .