Facebook and Instagram often filter their ads to prevent ad scams. However, a new modality always emerges that manages to get rid of these restrictions. A new one that is filling the feeds of Facebook and Instagram users has to do with supposedly forgotten pallets in the purest style of the program «Who gives more?».

The mode of the advertisements is similar. In them, it is said that for just 30 or 60 dollars (or euros) , you can get a pallet or box forgotten or lost in a warehouse. The pallets or boxes, supposedly, have not been opened, so they can contain anything. The deception mechanism is the same in these advertisements, where either photos of the pallets are shown, or false testimonies of people opening boxes full of mobiles or other valuable items. In the photos you can see pallets, but they also “sell” boxes individually. They claim that the value of these boxes is very high , and their contents can be purchased for a very low price. Not surprisingly, they can’t tell what’s inside without opening it, and if they know there’s something of value inside, they’re not going to give it away cheaply. For example, in the following ad we can see how they claim that the boxes have a value of more than 500 euros, and they sell them for 29.99 euros.

In the posts of the ads there are false comments from users who claim to have received high-end products at low prices , such as an iPhone or an Apple Watch. Some of the fake websites are lggenb.com and important.fit, which should be avoided at all costs. The hook price of $ 30 or $ 60 is a fairly balanced figure, since it is not too high to slam it shut, and it is low enough that some users are encouraged to try their luck. In addition, they encourage you to buy several, since for example if you buy two they will give you a 10% discount. 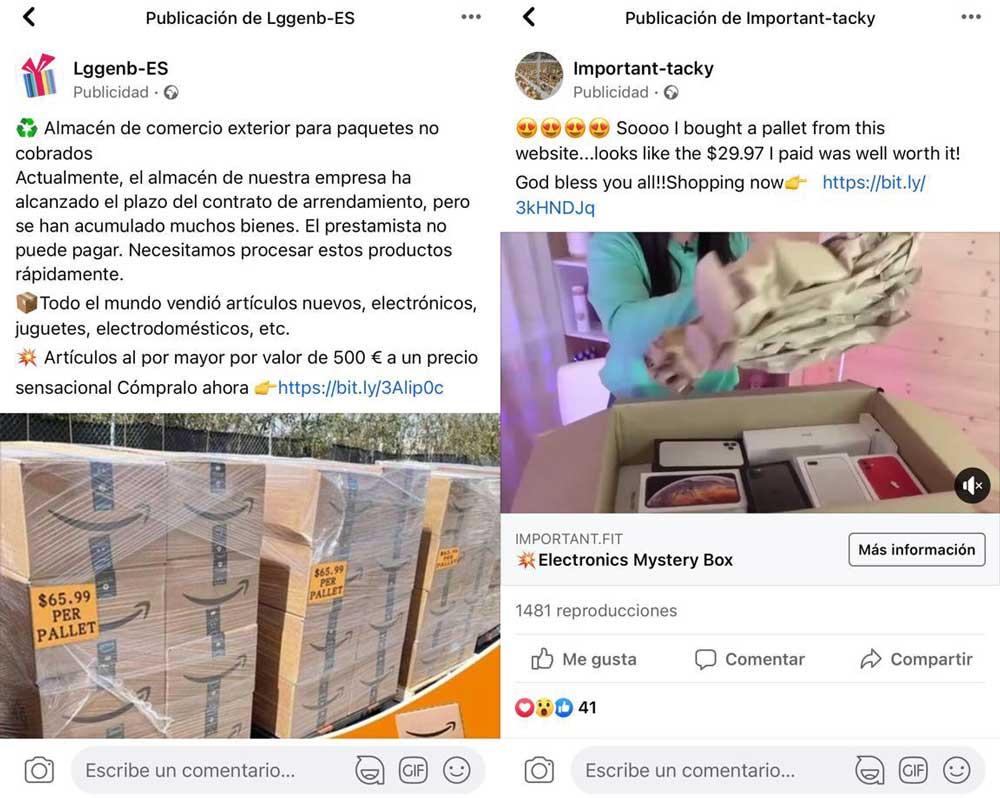 In the ads you see categories divided by product type, including one for cosmetics, another dedicated to miners, and even others exclusive to Amazon boxes.

The websites were registered in August and September

A quick search in who.is allows us to obtain information about the domains , as they were registered in mid-August and early September, so the information is quite recent. In lggenb.com we can see that it is registered in China, the same one that appears on the Facebook page. Thus, the scams come from there, where the international crimes they commit are not usually prosecuted, since they cannot be extradited.

Lggenb even accepts PayPal, which can give it an appearance of legitimacy. However, nothing is further from the truth, the situation will end up triggering a dispute with PayPal, and the scammer will simply have to delete the PayPal account that he has used. In the case of important.fit, it is not possible to reach the ads from the main domain, and it is necessary to access through the URLs that appear in the ads.

The stores claim that the boxes they have are from orders whose owners have not requested , and they are accumulating in the warehouses. Therefore, they “need” to give them an outlet. On the pages themselves there are supposedly also images of happy shoppers.