Although in the past it seemed like a science fiction thing, editing photos and making photomontages today is within everyone’s reach. For years, we can find all kinds of software, more or less intuitive, that will allow us to carry out all kinds of tasks with our photos. One of the best known and most widespread that we can find is Photoshop, of which we have surely all heard of. However, it is not the only option, nor is it the best in many respects. And, if not, let them tell GIMP. GIMP has always been one of the best alternatives to Photoshop in every way, both in terms of functions and, above all, in price. This program has an open source development thanks to which any programmer can help in the development and improvement of this program.

It is true that, for a long time, the program has been in the shadow of the Adobe alternative. The interface, for example, left a lot to be desired, as well as the layering support and the overall performance of the program. With the passage of time, all this has been improved, and it will take a new qualitative leap as soon as version 3.0 of the program arrives. However, not everything makes it shadow, and GIMP has features that, of course, make it stand out from its biggest rival. 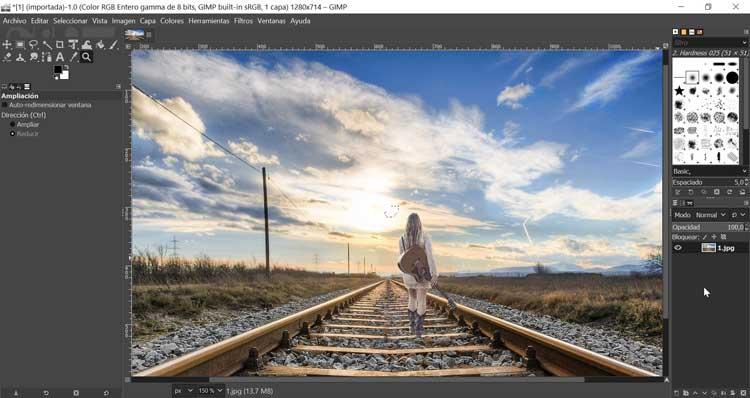 Price: the cornerstone of GIMP

Of course, when we talk about GIMP, the main attraction we find is its price . While Photoshop is an infinite payment program (12 euros per month, and if we stop paying we will run out of program), GIMP can download it and use it without any limitation without having to pay a single penny.

Besides being free, this program has the advantages of any other open source software. For example, regarding privacy, user data collection, and code quality.

Use it wherever you want, especially on Linux!

Another of its main advantages is that it is a multiplatform program. Its rival, Photoshop, only works on Windows (in new versions in its latest versions) and on macOS. However, GIMP goes a step further and not only allows us to use it on older versions of Windows and macOS, but it is also available for the Linux operating system.

Thanks to this we will be able to have an image editor, with professional functions, regardless of the operating system we use.

The WebP image format is a high-performance format developed by Google with the web in mind. Despite having become a standard for presenting many advantages over other formats such as JPEG or PNG, there are many programs (viewers, editors, etc.) that do not support it. And one of them is the Adobe editor. If we want to open WebP with Photoshop, it is necessary to download and install a plugin by hand that makes it compatible with it.

However, we can open and save in WebP with GIMP without any problem and without the need to install or configure anything else.

Although processing and editing images requires a certain level of power, we cannot deny that Photoshop sometimes goes overboard when it comes to using the CPU, GPU, and RAM. Therefore, the image editor par excellence is not an option at all recommended in low or mid-range computers that are just CPU and memory.

GIMP, however, is a much lighter and more optimized program, perfect to run even on older computers with limited features. It is true that, sometimes, it takes much longer to open when analyzing all the installed fonts. But, other than that, it consumes much less resources than its rival, even when processing very large photos.