Today the most anticipated technology conference of the year took place. The Apple Event 2021 , with the slogan ” California Streaming “, has marked the arrival of the iPhone 13 and a multitude of news that Apple has unveiled today. We are going to go with a summary of all the news that the company has announced today.

Tim Cook has started showing the trailers of some new content that is coming to Apple TV + soon, with actors and top quality content. 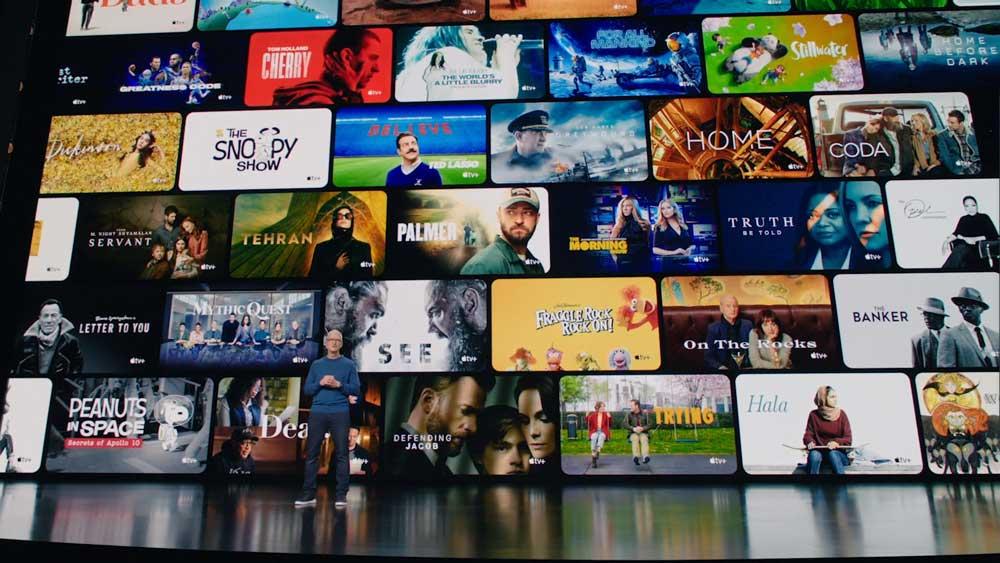 The contents that will arrive on the platform in the coming weeks are:

The first product range to announce news was the New iPad (2021) , which has grown by 40% this year. Apple today announced a new iPad with the A13 Bionic chip, which has a 20% faster CPU, GPU and Neural Engine, improving the overall performance of the device. 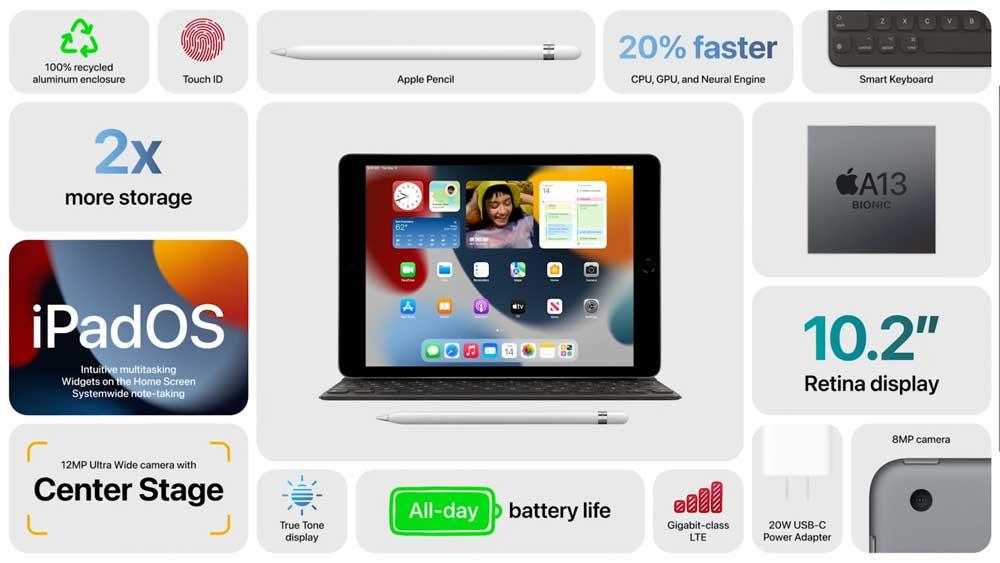 The front camera now has 12 MP and a viewing angle of 122º. The Center Stage function comes to this model from the iPad Pro, where the camera zooms to follow us if we move in front of the camera. It also incorporates True Tone to adjust the color of the image to suit the environment. 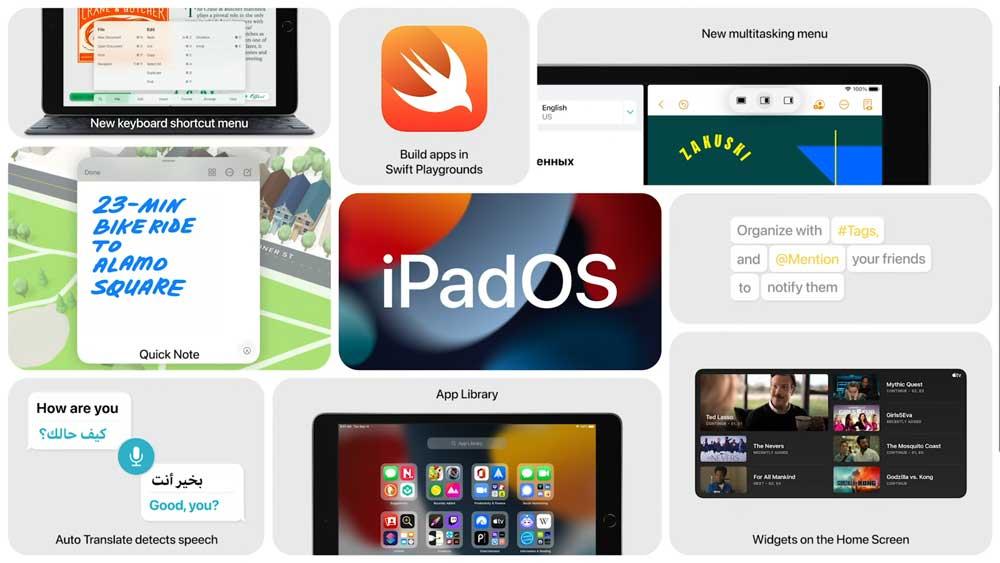 The new iPad has iPadOS 15, with new features such as widgets on the home screen, improved multitasking, Quick Note, and a long etcetera. The connectivity of the iPad is LTE, so we will have to wait another year for it to have 5G. The price of the new 10.2-inch iPad starts at 379 euros for the 64 GB model. It will be on sale from September 24.

Then, Apple has shown the New iPad mini (2021) , also compatible with the Apple Pencil. It integrates a Liquid Retina screen with a size of 8.3 inches, maintaining the same size of the previous model. The panel has 500 nits , True Tone and Wide Color. It has Touch ID on the top.

Performance improves 40% on CPU and 80% on GPU over the previous model, while the Neural Engine is twice as fast. The connector on the iPad mini is now also USB C just like the iPad Air. In addition, it has 5G , with download speeds of up to 3.5 Gbps . 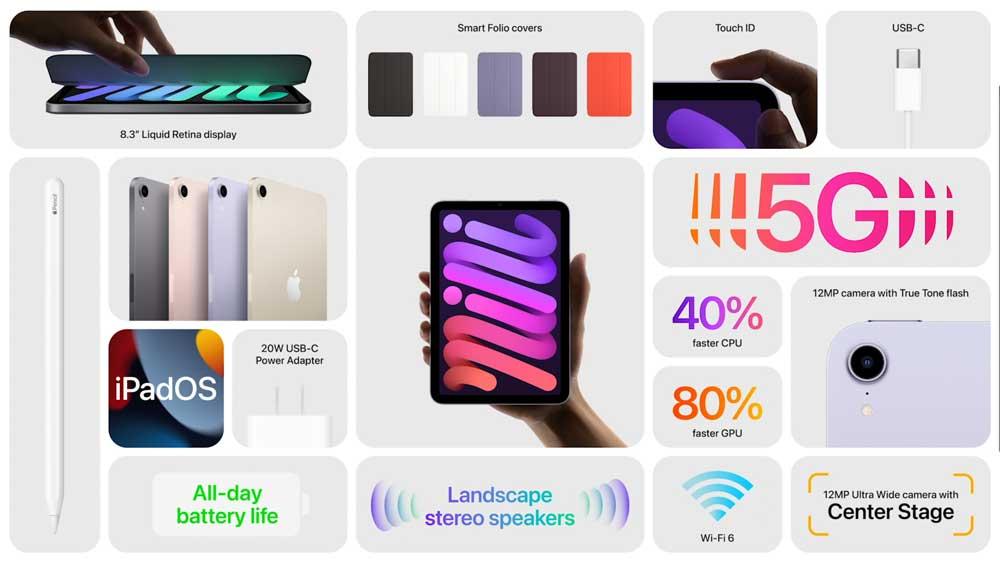 The rear camera is now 12 MP with f / 1.8, also incorporating a flash with True Tone and the possibility of recording video in 4K. On the front we have the 12 MP camera with f / 2.2 aperture, also compatible with Center Stage for video calls. The speakers are stereo, ideal for viewing content.

Its price starts at 549 euros . It can be reserved today, and they will start shipping it from September 24. There are WiFi and 5G versions. Includes 20 W charger with USB C connectivity.

Then Apple has shown the new Apple Watch Series 7 , one of the most advanced smartwatches on the market. Now, with watchOS 8 , the watch is updated with improvements ideal for bikes. It automatically detects when we start cycling, and an improved algorithm to detect when we use an electric bicycle. It also has fall detection. 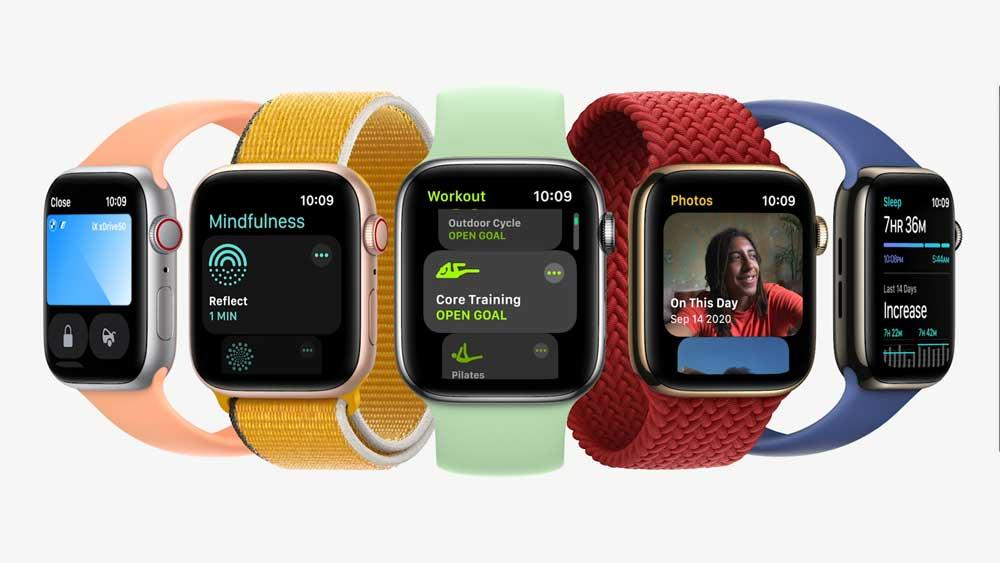 The new Apple Watch Series 7 features the largest screen on an Apple Watch , with a bezel of just 0.7mm, allowing for a larger screen without increasing the size of the watch itself. The screen has a brightness of up to 70% higher, and now the curvature is even smoother and more pleasant to the touch. Now there is a full keyboard to send messages, and 50% more text can fit on the screen. 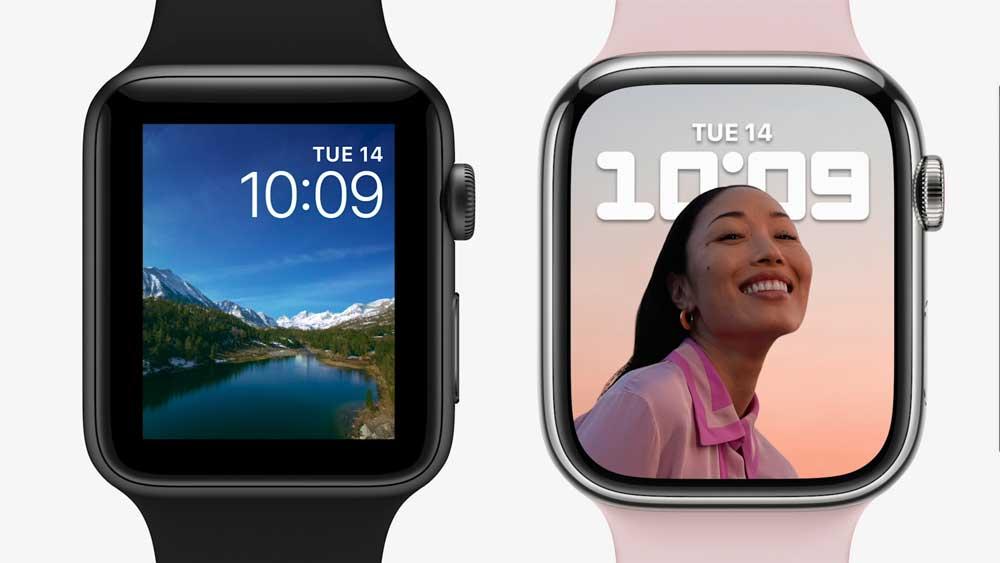 All apps are adapted to the new interface, and it shows more information. The glass resists shocks, and the device has IP6X resistance, withstanding up to 50 meters under water. It charges 33% faster, and the battery lasts 18 hours. The charger uses a USB C connector, magnetically adapting to the rear. 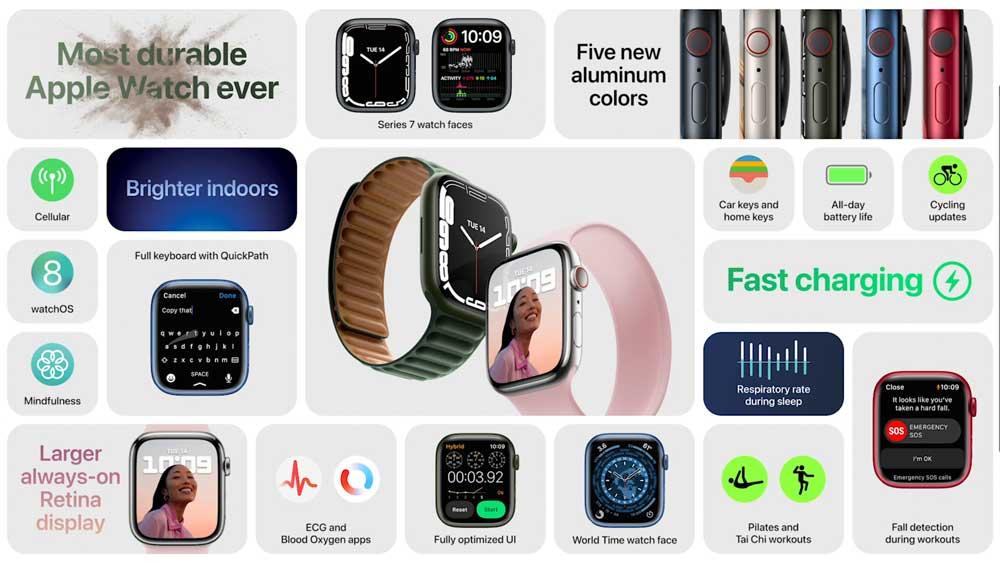 It will be available in ten different finishes, as well as straps of all kinds; including Hermes. It is compatible with current belts. The Series 7 starts at $ 399 (it will be about 429 euros in Spain). The Series 3 stays at $ 199, while the Watch SE starts at $ 279. It will be on sale this fall.

Apple has also shown news in Apple Fitness + , which arrives in Spain along with 17 other countries. They also have news like meditation and Pilates, as well as a new ski preparation program this year. We also have sports groups of up to 32 people. If you buy Apple Watch, you receive 3 free months of the service, while if you subscribe normal it is one month. We do not know what the price will be in Spain, but in the United States it costs $ 9.99 per month, or $ 79.99 per year. 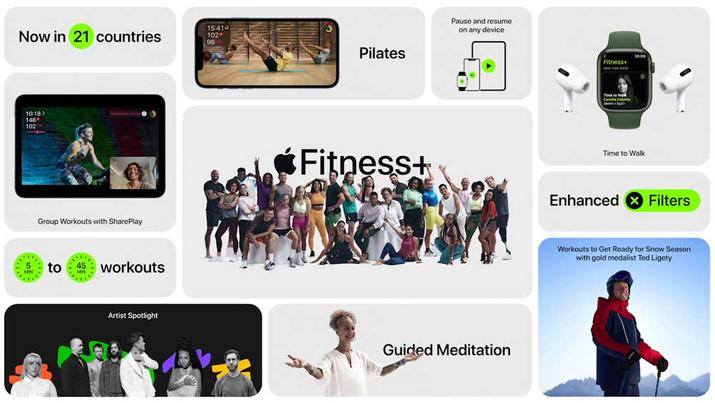 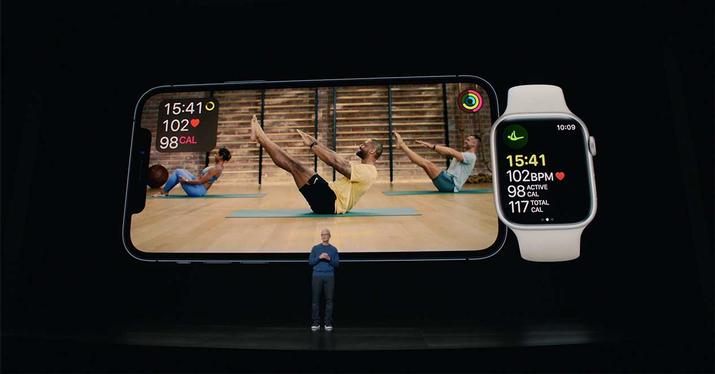 Then, Apple has shown the highlight: the new iPhone 13. The leaks were right, and we continue to have a mobile with a large notch on the front, as well as a flat design on the front and back as in the models previous. The cameras are now positioned diagonally. The notch, yes, now is something smaller. The battery increases in capacity and the screen of both phones has a 28% brighter of up to 1,200 nits. 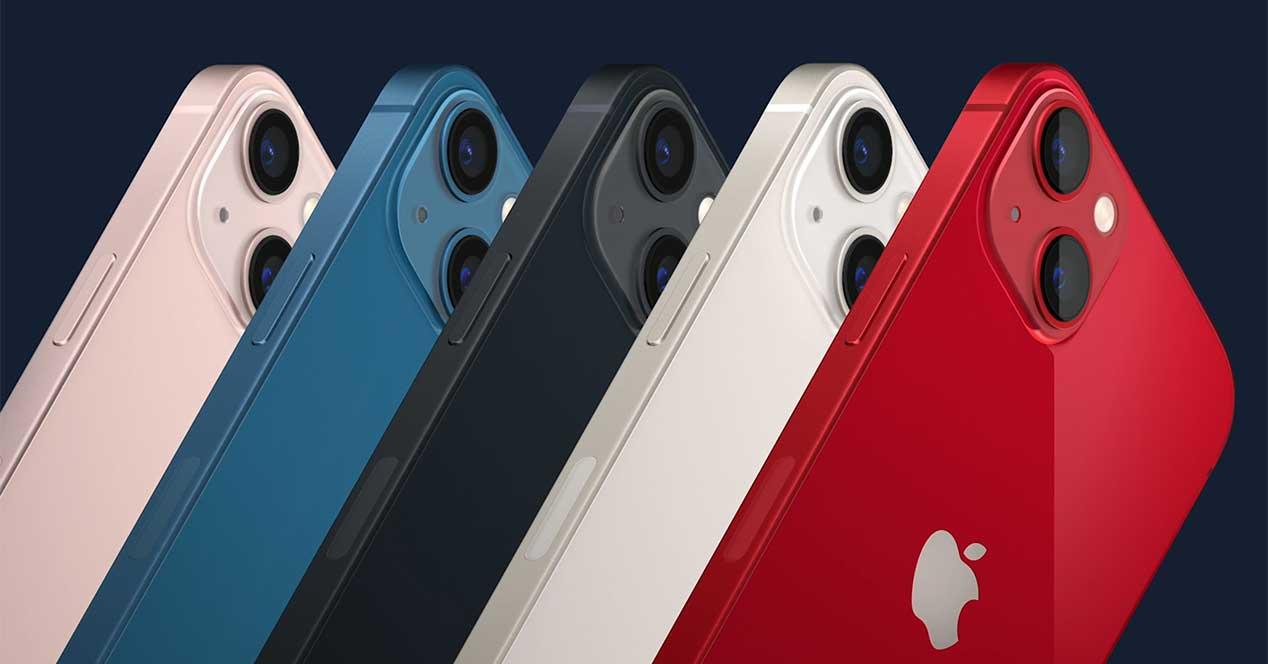 Inside we find the new Apple A15 Bionic . The chip is 5nm, with 15 billion transistors. The processor is 6-core, with 2 high-performance and 4 low-power. The GPU has 4 cores, and it is 30% more powerful than the previous model. The Neural Engine has 16 cores with 15.8 trillion computations per second. Night images are now even better. 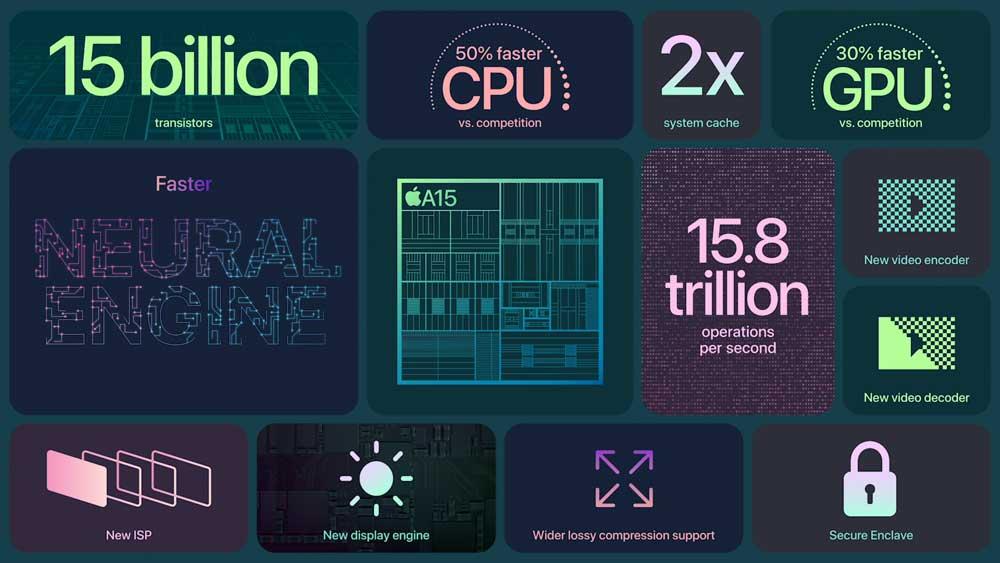 In the cameras we find a 12 MP sensor with aperture f / 1.6, focal length of 26 mm and 47% more brightness . Sensor Shift also comes to the cheaper models, with stabilizing on the sensor instead of on the lens. The wide-angle sensor also has 12 MP, with higher quality, 120º of vision, aperture f / 2.4 and a focal length of 13 mm. 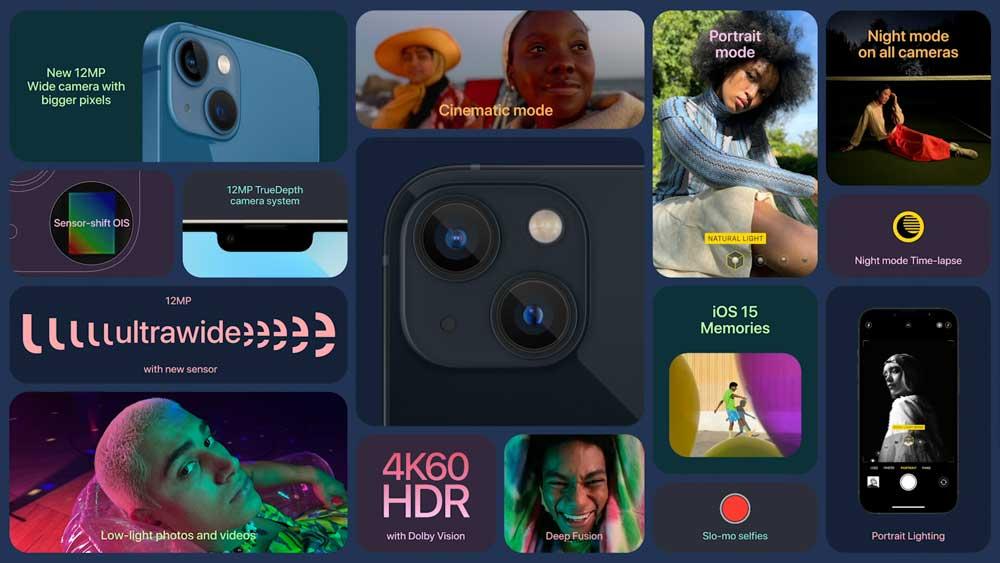 At the video level, Apple includes the new Cinematic Mode. This new mode adds a cinematic touch to videos, with rack focus to shift focus from one subject to another fluidly depending on the item you want to display. The focus stays on the subject even when it is moving, and it detects when the subject is about to enter the shot. Everything is recorded in Dolby Vision for excellent HDR. Videos are recorded in up to 4K at 60 FPS .

As for 5G, the iPhone 13 has coverage and speed improvements. The battery will last 1.5 hours longer in the 13 mini compared to the 12 mini. In the 13, the battery lasts 2 and a half hours longer than in the iPhone 12. These improvements are thanks to a larger battery, and new functions that reduce consumption. 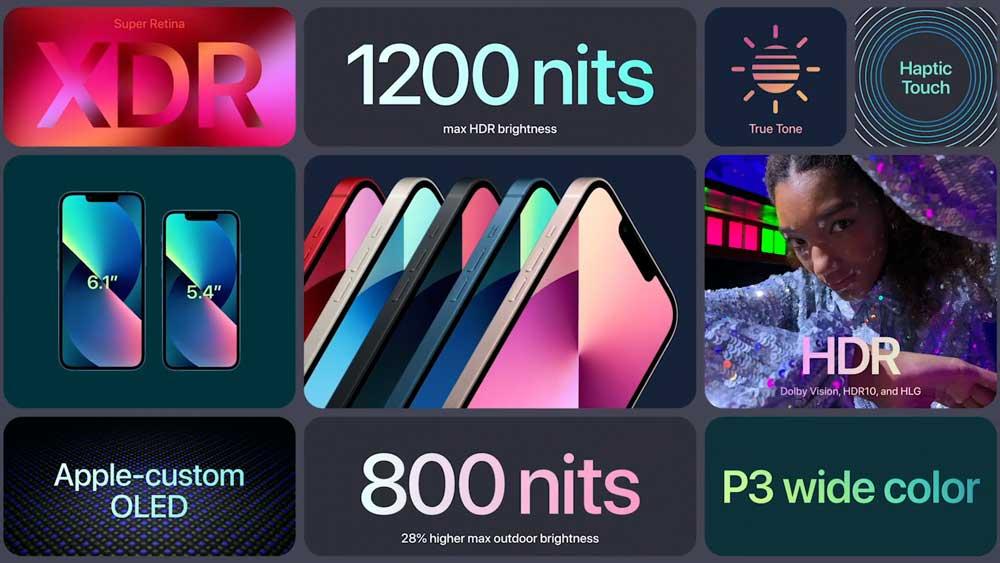 There are also privacy improvements, such as hiding the IP from web pages so that they do not track us. Siri commands are processed at all times on the device. 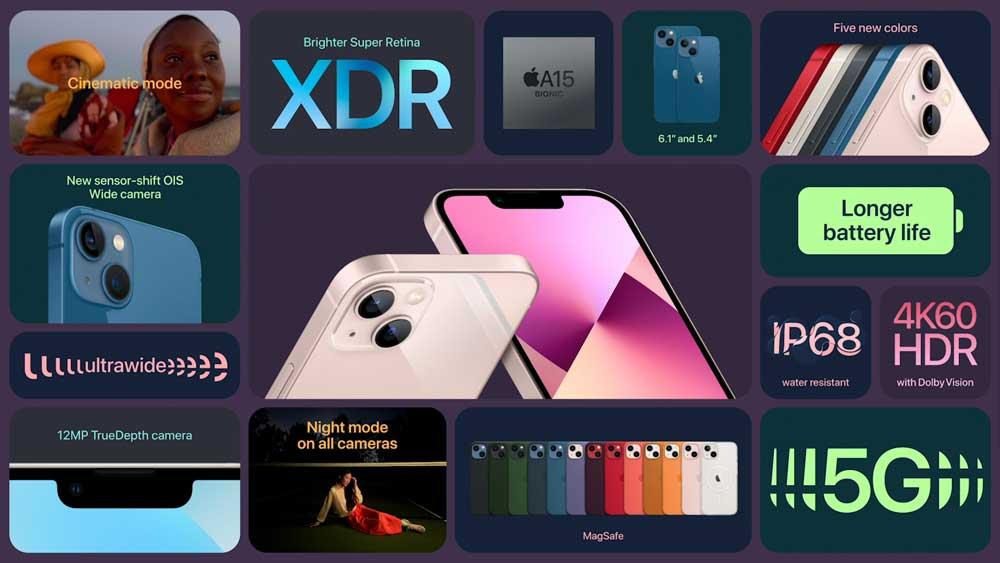 The iPhone 13 starts at 909 euros, while the iPhone 13 mini starts at 809 euros. The price is maintained, and also the minimum capacity increases, since the 64 GB model disappears. Now we choose between 128 GB, 256 GB and 512 GB . It is available in 5 colors. It can be reserved from this Friday, and will be on sale on September 24 .

Along with the cheaper models, Apple has also announced the new iPhone 13 Pro and 13 Pro Max . The notch is 20% smaller, and the rear features sapphire on the cameras. The interior has also been completely redesigned to have more battery and allow more space for the new cameras. 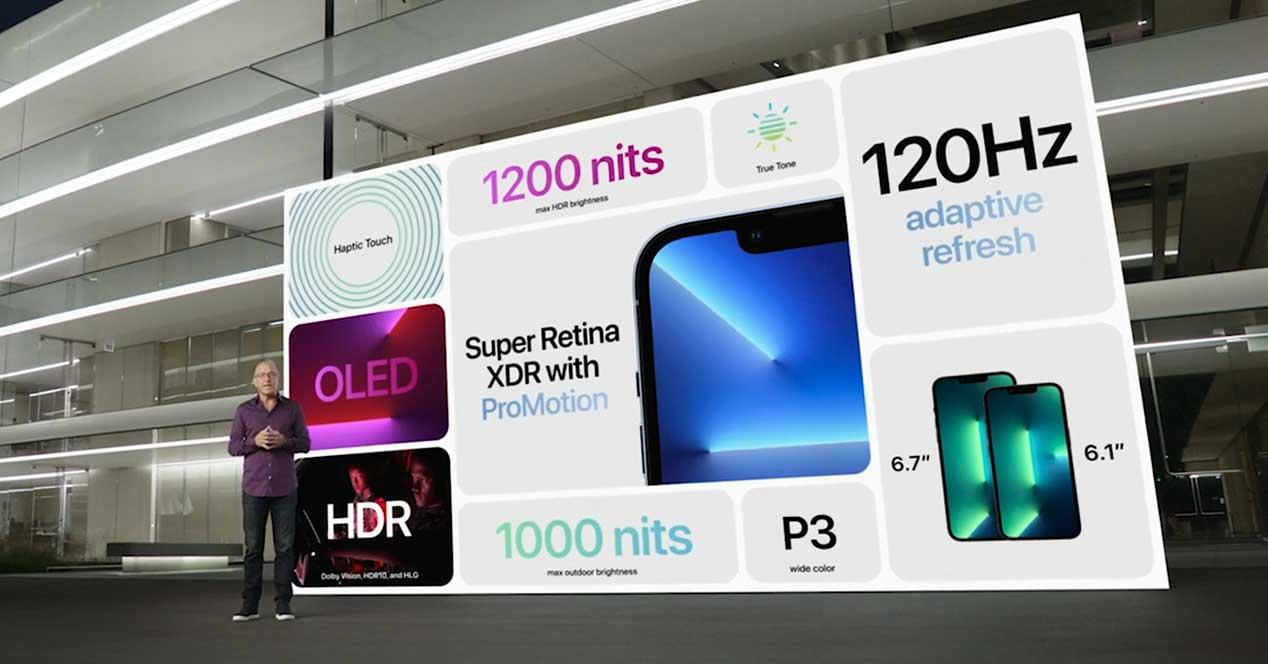 The A15 Bionic on the Pro models has a 5-core GPU instead of 4 on the iPhone 13 and 13 mini. The screen is Super Retina XDR , reaching up to 1,000 nits outdoors , and includes ProMotion, with refresh rates that adapt to the content going from 10 to 120 Hz. Thus, we have that Apple finally integrates 120 Hz panels in the iPhone, allowing a more fluid use of the mobile and more precision in games. The displays come in sizes 6.1 and 6.7 inches, reaching up to 1,200 nits. 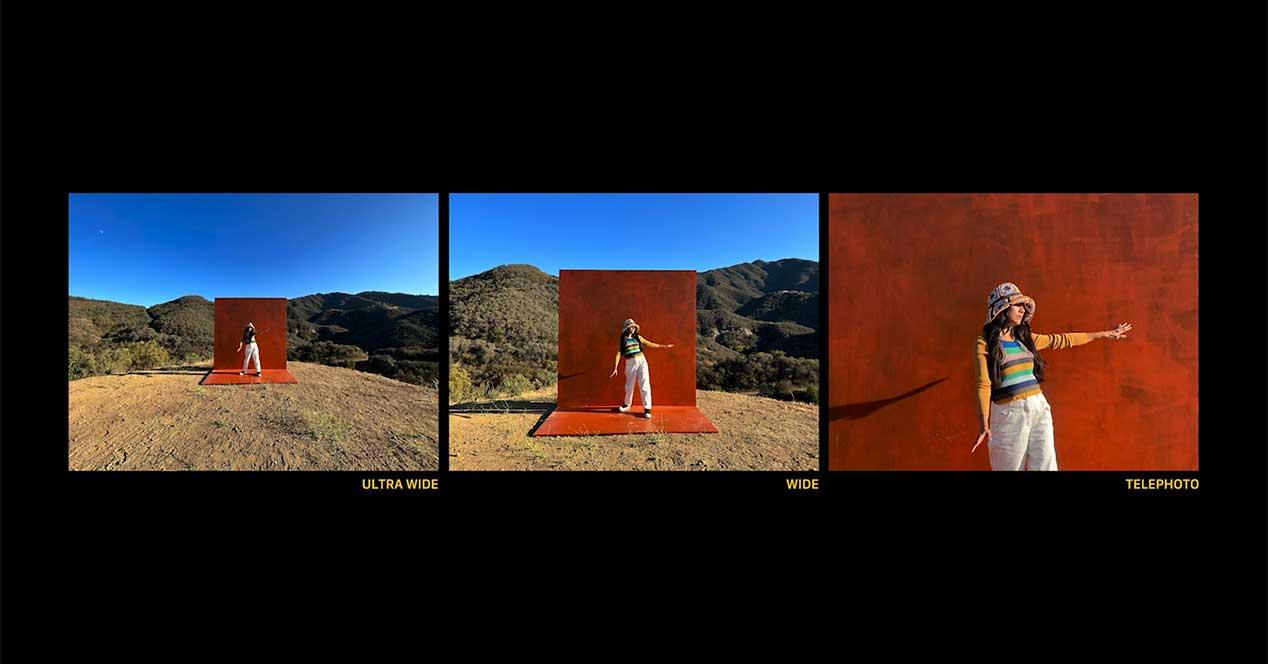 As for the cameras, we start with the telephoto lens with a 77mm focal length that allows zooming up to 3x. The wide- angle camera has the largest sensor on an iPhone with f / 1.5 aperture, 1.9 µm pixels, and a 220% improvement in low-light situations. In the case of the wide angle , we find an aperture of f / 1.8 and it improves image quality by 92% in low light situations. 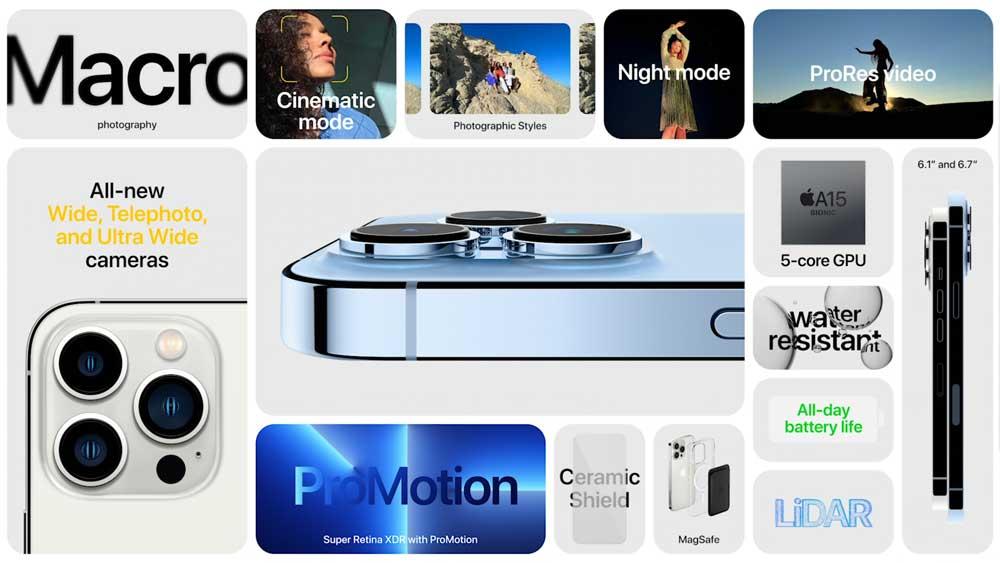 The cameras also allow taking macro photos for the first time on an iPhone, being able to take close-up photos with the mobile practically stuck. All sensors have Night Mode. When it comes to editing photos, the mobile allows us to choose retouching before taking the photos with Photographic Styles .

In video, we also have the new cinematic mode, being able to apply the blur after recording the image. By the end of the year, ProRes Video will be added . With it, we can record 4K at 30 FPS to record and edit directly in ProRes for higher quality. As for the battery, the iPhone 13 Pro lasts 1 hour and a half than the previous model, while the 13 Pro Max lasts 2 hours and a half longer. 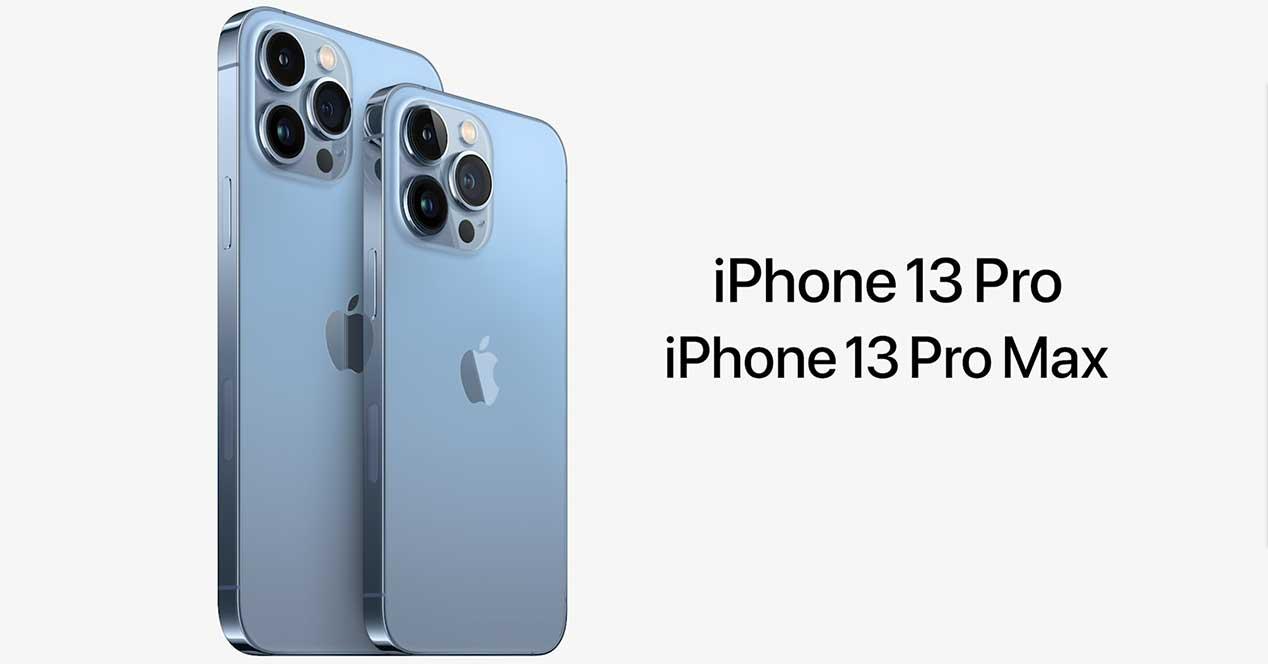