It is more than likely that many of you have software on your computer to compress and decompress files. We find both free and paid solutions of this type, WinRAR being one of the most popular and used at the same time.

The benefits and utilities offered by these programs are very varied. At first we might think that its operation is focused on helping us save space on the disk drives. But with the passage of time this sector of the software has greatly improved and increased its functionality. All this thanks to its developers and the functions they put at our fingertips. A good example of all this can be found in the aforementioned WinRAR, a program that, despite its simplicity, is sure to help us a lot. In addition to saving space, as we mentioned, it can also be used to combine a multitude of files and folders in a single file. This way we can transport it on a USB memory in a much more comfortable way, or share it in a personal blog or through email. In addition, this type of application in particular offers us many very interesting functions, some related to security and privacy.

A clear example of all this is found in the event that we want to protect the content of those files. And it is that programs like WinRAR offer us the possibility of assigning them a password and protection through internal encryption. We must also keep in mind that one of the most common modes of operation of these programs is to divide the compressed files into several parts. This is a fairly common feature and has been present in file compressors for decades.

At this point, some users may wonder about the need to divide a compressed file into several parts with this type of application. Well, it is worth mentioning that its usefulness is great, both years ago and today. To give you an idea, in the early days of this type of application, it was common to use floppy disks as an external storage method. 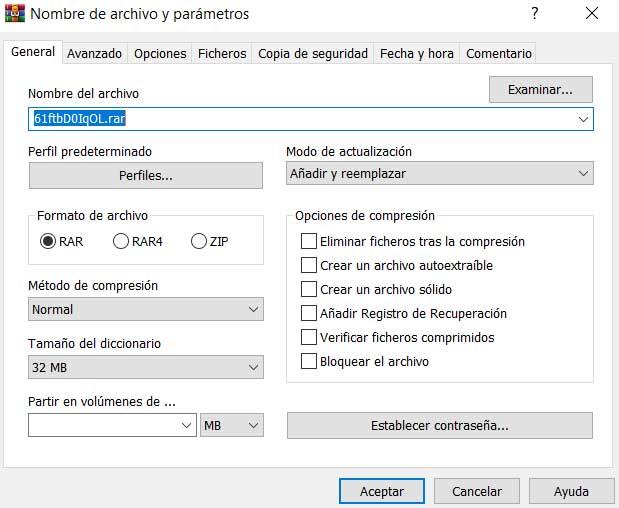 Therefore, the usefulness of dividing compressed files into several parts was quite obvious as well as common. This function allowed us to separate a large file into various media for later decompression on another PC , for example. The truth is that today we have much larger media in terms of available space. But at the same time we also handle files that sometimes weigh several gigabytes. Precisely for this reason it can be more than interesting to divide a large tablet into several USB sticks.

To all this we must add that, depending on the power of our PC, the operating system generally finds it faster and easier to work with several smaller files than with one large one. In addition, WinRAR has an additional function that allows us to decompress that data, even if one of the files is damaged. On the contrary, if we have only created a file, and we have a problem with it, we lose all its stored content.