Intel Gen 11 desktop CPUs include changes to the integrated memory controller. That is why we have decided to make this article, where you can know at what speeds you have to place the BMI values of Rocket Lake-S for Gear 1 and Gear 2 modes for DDR4. In order to get the most out of it and ensure that the CPU communicates properly with the RAM.

One of the changes that Intel has made in the circuitry of its Gen 11 desktop CPUs, with Rocket Lake-S architecture, is the renewal of the memory controller or Northbridge. The part of the CPU in charge of communicating the different cores with the RAM. These changes affect when choosing DDR4 modules for the PC. We tell you which is the best selection. Gear 1 versus Gear 2 in Rocket Lake-S

When it comes to communicating with RAM, the memory controller in Intel’s Rocket-Lake-S architecture CPUs has two different modes of operation called Gear 1 and Gear 2. Gear 1 refers to the clock speed of memory or MCLK, while in Gear 2 mode, that speed is halved.

DDR4 being a type of DDR memory, the memory clock speed is half that of the Gbps that are stipulated in the memory model, so the memory speed of the DDR4-3600 is 1800 MHz. Regarding the communication of the integrated memory controller, IMC, with the DDR-3600 in Gear 1 mode it is 1800 MHz and in Gear 2 mode it is 900 MHz. 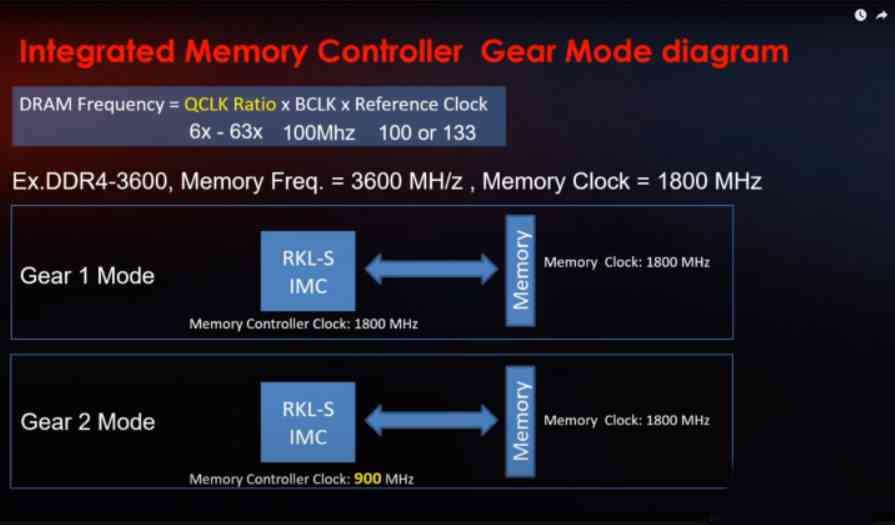 The reason why this is done is none other than increasing the memory interface clock speed increases energy consumption, so cutting its clock speed can support higher speed RAM. Another reason is that as we increase the bandwidth of a memory with its processor, its latency also increases.

CPUs unlike GPUs do not have internal mechanisms to mask latency and RAM with increased latency due to increased bandwidth is counterproductive in performance. With Gear 2 mode, Intel sacrifices bandwidth, but keeps latency low and thereby maintains CPU instruction performance.

BCLK and QCLK on Intel Gen 11 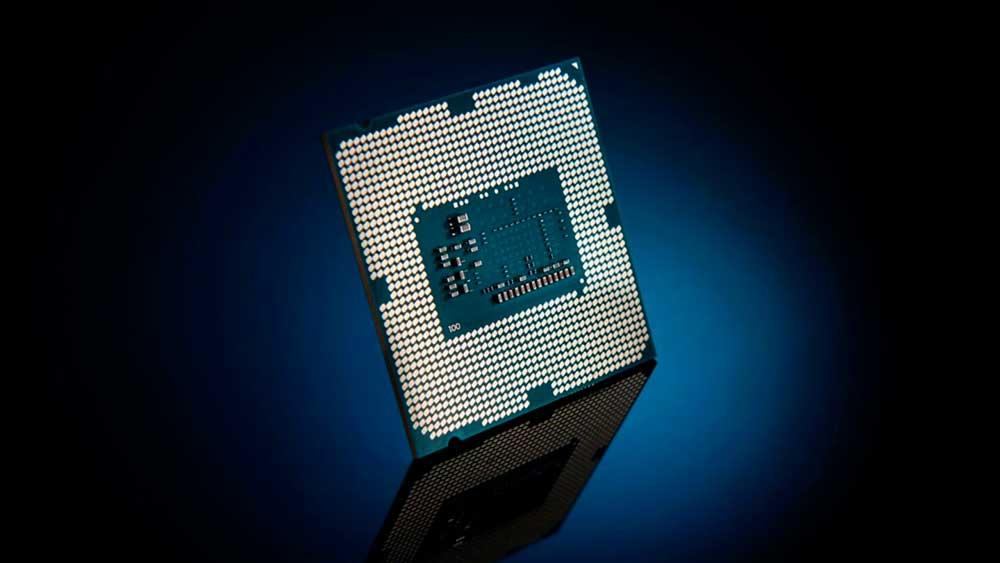 Now that we know the differences between both modes, it is necessary to know when we should activate Gear 1 mode or Gear 2 mode on the processor. Since it has been shown that the Gear 2 mode at certain clock speeds is not only the only way that the CPU supports them, but in certain settings the Gear 2 mode gives better performance than the Gear 1 mode. Access through Gear 2 works with lower instruction latencies.

The Rocket Lake-S onboard memory controller works with the following settings:

The formula to know both the BCLK and the QCLK to reach a specific MCLK is the following:

The reason for dividing it by 2 is that we are talking about a DDR memory, to make it more accessible we have decided to eliminate the division, since if we want to know if a DDR4-2400 memory is going to be compatible with Rocket Lake-S we just have to make sure that BCLK * QCLK of a result of 2400.

DDR4 not supported by Rocket Lake-S 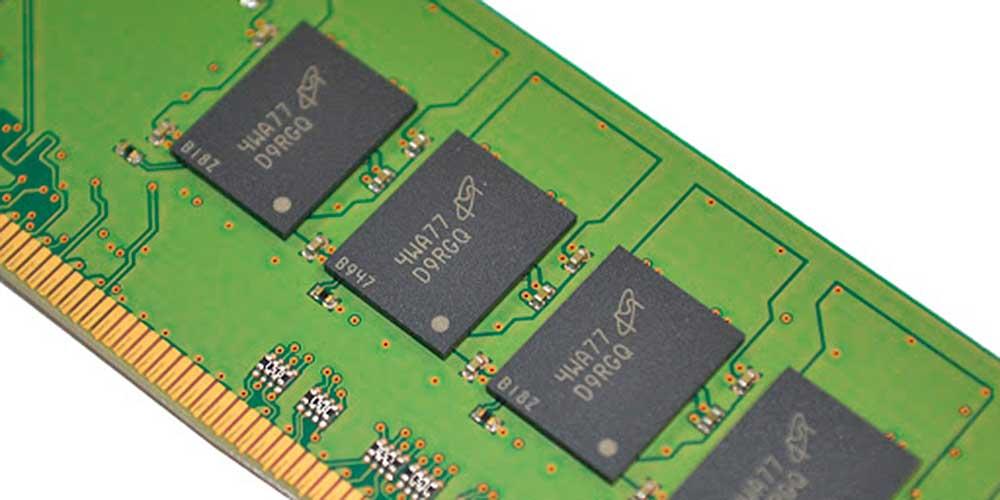 From the information explained above we can know which DDR4 memory is compatible with Rocket Lake-S, which BCLK can be used and which QCLK multiplier must be placed on the BMI in the BIOS of our PC. That is why we have decided to make two tables, one so that you can know how to configure the BCLK and the QCLK in Gear 1 modes, the other in Gear 2 mode.

The types of memory supported in Gear 1 mode can be seen in the following table: 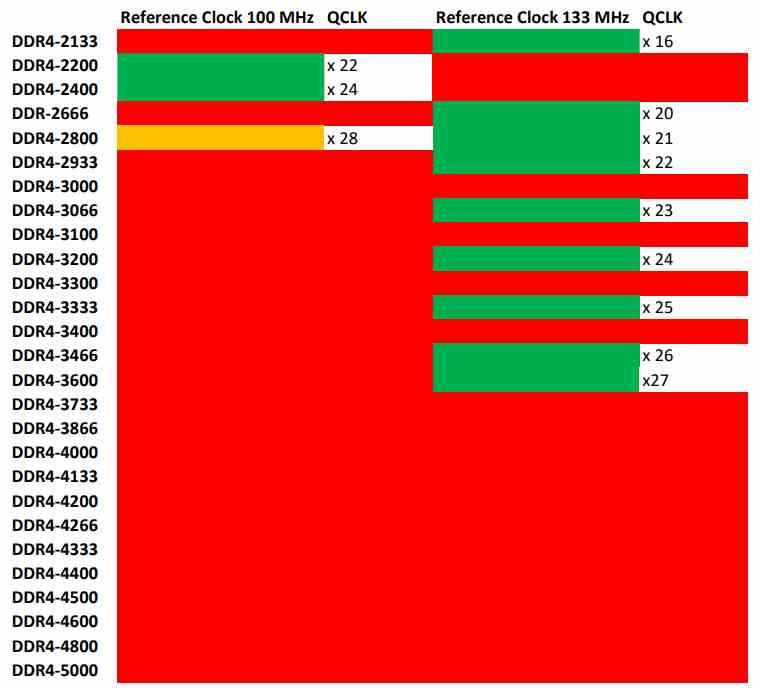 As for Gear 2 mode, the table is as follows: 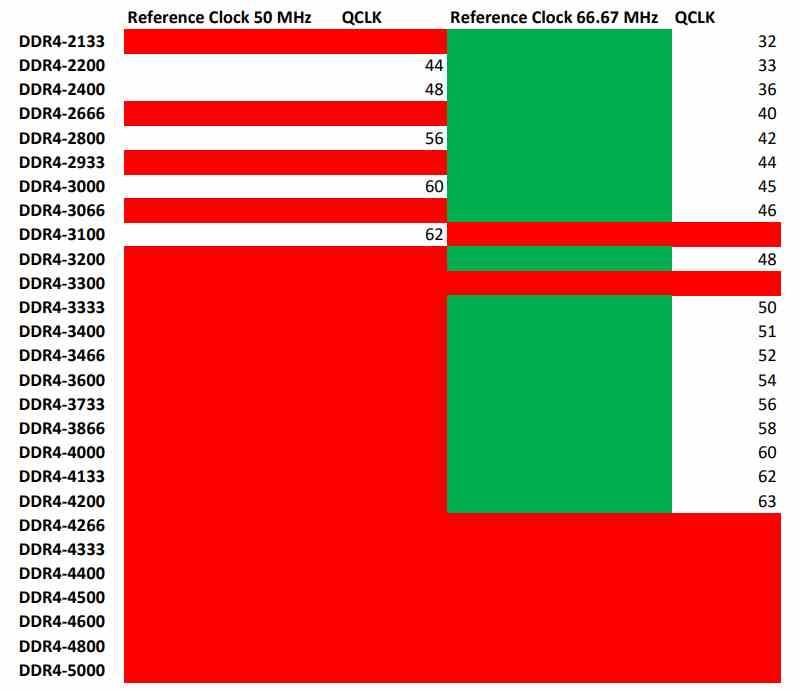 In Gear 2 mode, the DDR4-4200 is the type of DDR4 with the highest speed supported, but for this it is necessary to activate the BCLK at 50 MHz x 1.33 mode. If we don’t we will be limited to DDR4-3100. Since Gear 2 mode has lower latencies than Gear 1 mode, we recommend using it. Not only to be able to use memory beyond DDR4-3200, which is the fastest type of memory officially supported, but also due to the fact that Gear 2 has higher performance.

How do I change the BCLK and QCLK on Rocket Lake-S?

It is very simple, you only have to do it in the RAM, many BIOS adapt the speed of the BCLK directly without further complications. Others on the other hand will make you have to modify the BCLK and the QCLK manually. In any case, you must not forget that if you update the DDR4 memory for your PC with Rocket Lake-S then you must make the corresponding changes in the BIOS to activate a Gear or another In Rocket Lake-S.