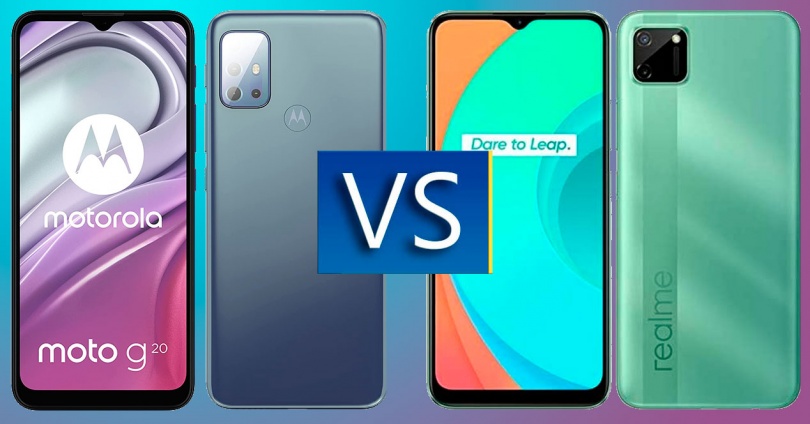 The input range has long ceased to be for slow and ugly mobiles, nothing is further from the truth. Since now for around 100 euros or a little more we can get some really valid mobiles for our day to day. It is the case of these Moto G20 and Realme C11 that we compare now, which offer us a lot for very little.

Two phones that we face not to say which is better of the two, since both are great terminals, but to be able to better know which of the two best suits your needs in relation to the price that both have.

We are facing two phones with a very similar size, since both have similar screens. Both are 6.5 inches in size , as well as HD + resolution. Both screens also have a drop-shaped notch, as well as an aspect ratio of 20: 9 on the Moto and 19.5: 9 on the Realme. But the big difference is in favor of Motorola , which has a refresh rate of 90Hz , something that we do not find in its rival. Here we have more equality, since both phones offer us the same characteristics when we talk about battery. Both have a 5000mAh, with a 10W fast charge , so in both cases we have a lot of capacity, although the charging speed is not going to be too much. In terms of connectivity, the Motorola is more advanced, since it offers Wi-Fi 802.11 a / b / g / n / ac , instead of the Wi-Fi 802.11 a / b / g / n of the Realme, so the speed Navigation will be superior in the first one, being able to connect to 5G Wifi networks. They both have Bluetooth 5.0, as well as GPS, or FM Radio. Also in favor of Motorola we have NFC to be able to make payments in establishments, as well as a USB type C connector, since that of its rival is microUSB. Both have an integrated fingerprint reader on the back. Regarding the software, the Moto arrives with Android 11 under the brand layer, which is very similar to stock Android. While the Realme arrives with Android 10 and is already waiting to update to the new version. We are talking about two cheap, very cheap mobiles. Although the Realme C11 is more so, which is currently priced at 109 euros . While the Moto G20 has a cost of 159 euros , so it is practically a third more than its rival. But logically the differences are great. Because the Moto undoubtedly stands out in many respects. It has a 90Hz screen , as well as a quad camera, NFC or Wifi ac. On the other hand, the Realme does not stand out in so many aspects, but it does in one of the keys. Because it has a processor a priori more powerful and contrasted than that of the Motorola.

We are talking about a MediaTek versus a Unisoc, and there the differences can be important. Therefore, if you do not want to spend a lot of money and enjoy a mobile with great performance and above all, the Realme is your mobile. Now, if you want a phone that stands out in everything else, from its screen, to the battery and of course the camera and connectivity, you will deserve to pay the difference in favor of Motorola.

It all depends on your needs, and it is clear that a mobile like the Realme will always be more affordable for most users, and will also serve a large majority even if less money is spent, being perfect for day to day. Although with the Moto you will have a higher quality mobile in many more aspects.