When buying a power supply , the decision can be quite complicated; You may be clear about the power you need, and you may even already know how efficient you would like it to be. However, the manufacturers’ catalogs are so extremely extensive that even at the same power and efficiency certification we can find different models, of which it is sometimes difficult to know which is better. Today is the case that concerns us, and we will make a technical comparison between power supplies Corsair Corsair CV750 and CX750M, both certified and 750W 80 Plus Bronze efficiency.

Essentially and at first glance, the biggest difference we find between these two PSUs is obviously that the CV750 has all the fixed wiring while the CX750M is semi-modular , and only the cables for the 20 + 4-pin ATX and EPS connectors. 4 + 4 pins are fixed and the rest are modular, giving us the convenience of not being able to connect them if we don’t need them. However, the price difference between the two sources is quite remarkable, so is it worth paying more for the model that is semi-modular?

As we have already denoted before, both are 80 Plus Bronze efficiency certified 750-watt power supplies, ensuring a minimum efficiency of 85% at 50% load (which is the typical state of use for an 80 Plus Bronze power supply). PC). Both sources also have a single + 12V rail, and both are analog and not digital sources, so they are paired up to this point. However, their similarities end here, because now things change a lot.

For starters, the CX750M is a much more modern source and proof of this is that it complies with version 2.4 of the ATX standard while the CV750 stays at version 2.31. Not for that reason it is a worse source, but as we are going to see next, there are many more things that change, starting with what we have also mentioned, which is the type of wiring, since the CV750 has all the fixed wiring and the CX750M is semi modular, only with the ATX and EPS connector cables fixed at the source.

Continuing with the wiring, we find another fundamental difference in the shape of the cables because the Corsair CV750 has all the thick cables, which makes it much more uncomfortable to route through the box, while the CX750M only has thick the two cables that are fixed. to the source, the rest being flat wiring that is much easier to channel through the box.

In addition, despite the fact that both sources have the same power, we can also find a rather large difference in terms of the connectors, since the CV750 only has two 8-pin PCIe connectors while the CX750M has four, which makes it compatible with Higher-end graphics and even with multi-GPU configurations.

Continuing with the differences, we find that the fan is also different; while the CV750 model has a 120mm fan, the CX750M has a 140mm fan, which means that the latter will have better cooling and will be quieter, even though neither of them have hybrid fan technology ( Zero RPM ) that allows it to turn off when the source is not being heavily loaded to reduce emitted noise.

In view of this, however, we find an advantage in favor of the CV750 that has been losing everything so far, and that is that it is relatively smaller and therefore will be more compatible with boxes that have little space. This font is only 125mm long by the 160mm of the CX7650M, making it pretty much an SFX-L font in terms of size and will be significantly easier to install in small boxes.

Apart from everything that we have already commented, we do not find major differences between one source and another, obviously leaving aside the price because there is a difference of 25 euros between one and the other, which leads us to the next section of this article that you can read below.

Is it worth paying more for the semi modular model? 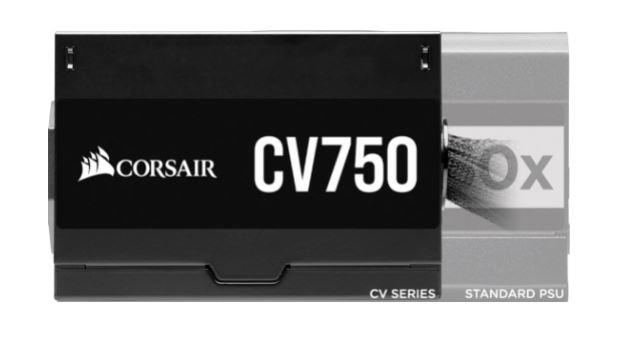 As we have seen in the technical comparison, the Corsair CX750M is a far superior model to the CV750 despite the fact that both have the same power and even the same efficiency certification. Semi-modular cabling is certainly an advantage over fixed cabling (although it is true that the most desirable would have been 100% modular cabling), but the fact that almost all cables are flat is a plus that we cannot go through high either.

In addition to that, the CX750M is a source that supports a more modern ATX standard, has a greater number of connectors and also supports multi-GPU configurations, something that the CV750 cannot boast of. As if this were not enough, the CX750M is backed by a 5-year manufacturer’s warranty compared to 3 years for the other model, which will also provide additional peace of mind to the user.

In short, the CX750M is “much more source” and really, with a price difference of about 25 euros, it is well worth opting for this model because it is notably superior, and will give the user greater comfort, versatility, compatibility. and even peace of mind if we take into account the two additional years of warranty that it carries.

So our verdict is that yes, the price difference is worth paying, but not just for the semi-modular cabling but for that in combination with all the other benefits that this power supply offers. In addition, already put in sources that are around 100 euros, 25 euros is not that they make a huge economic difference and more if you are looking for the quality guarantee that a manufacturer like Corsair gives.