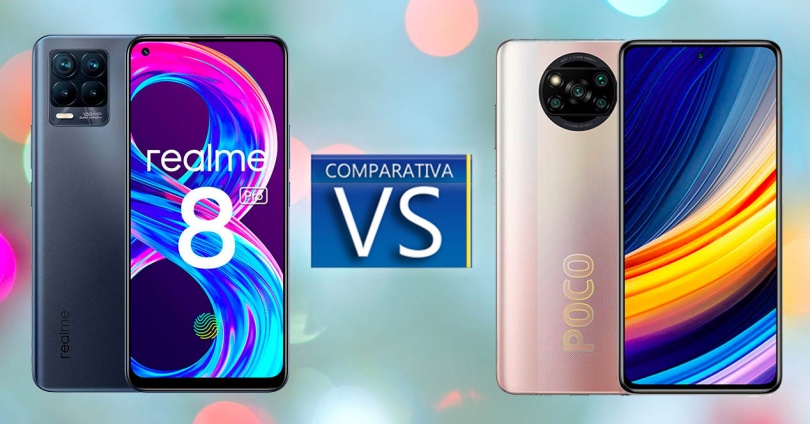 The latest mid-range mobile launches have brought great news and impressive terminals, among them we find the Realme 8 Pro and the Poco X3 Pro . Two smartphones with various similarities and differences that may make the final choice very difficult when changing devices. In addition to the fact that the prices in the mid-range are not going to facilitate this decision.

So to choose the best terminal it will be necessary to take into account even the smallest detail. And all with the aim of finding the mobile that best meets our needs , so we will do an extensive review of all the advantages and disadvantages that these two smartphones will offer us, from their screens to their batteries. Discover this comparison and pay attention to know which of the two will best suit you. Great rivalry on your screens

This is one of the first points where we can find differences and equalities between these two terminals, since we are faced with great designs that have been made of plastic , although the Poco X3 also has glass. In addition, the latter has IP53, protection against dust and splashes that is appreciated. Regarding the weight, in the case of the Poco X3 Pro it reaches 215 grams, compared to the 176 grams of the Realme 8 pro. A relevant difference can be found in the fingerprint reader, since the Realme 8 Pro has chosen to integrate it under the screen with biometric protection , something that occurs in the high-end of the company, while the Poco X3 Pro places it in the side of the phone.

And if we give way to its screens, we will see that the Realme 8 Pro has an Amoled panel and Full HD + resolution of 6.4 inches , unlike the Poco X3 Pro that has a somewhat larger screen, 6.67 inches with IPS LCD technology. And although they share a refresh rate of 120Hz, in touch sampling the Realme is again superior with its 240 Hz, compared to the 180 Hz of the Poco. Both integrate protection against scratches and Corning Gorilla Glass to protect them from shocks, version 3 in the 8 Pro and 6 in the X3 Pro.

The difference could be in its potency

One of the most outstanding aspects of the Poco X3 Pro is that it is positioned far above with its Qualcomm Snapdragon 860 , bypassing the power of the Realme 8 Pro with its Snapdragon 720G. And it is that, having this powerful chip in the Poco model, it has not caused an excessive increase in its price, making it a great attraction for those users who seek great performance in their smartphone. Likewise, also find differences with respect to its GPUs, since the X3 Pro is accompanied by the Adreno 640 , compared to the Adreno 618 of its rival. As for memory there are small changes, since the Little X3 gets back above the UFS 3.1 technology in its memory, compared with the UFS 2.1 Storage of the Dimon 8 Pro. Although, if sharing aspects, as the two models They have LPDDR4X RAM technology in their 6 or 8 GB options. But, in the X3 Pro you can choose between 128 or 256 GB, compared to the 128 GB of internal storage of the 8 Pro. Both models have a slot to expand their memories through MicroSD.

Inequality in their chambers

Another very relevant point in the final decision that will lead us to choose between one or the other occurs in the cameras. We start with the Realme, which offers us a 108-megapixel main sensor compared to the 48-megapixel Poco . The main camera of the 8 Pro is accompanied by an 8 MP ultra-wide-angle sensor with f / 2.25 aperture, as well as a 119º angle of view and a 2 MP macro camera capable of taking photos at a distance of 2 cm with f /2.4. In the X3 Pro we will also have an 8 megapixel wide-angle sensor, but with an f / 2.2 aperture. and field of view of f / 2.2, a macro camera of 2 MO with f / 2.4 and possibility of focus at 4 cm, and lastly, a depth sensor of 2 MP with aperture f / 2.4. Moving on to the selfie cameras, there are 20 megapixels that Poco gives us to define our face and 16 megapixels of the Realme 8 Pro, although however we will hardly notice the difference since they will offer us very similar results. Video recording is accompanied by a digital stabilizer on both phones. In addition, both terminals have a slow motion recording of up to 960 fps and a maximum resolution of 4K with 30 fps, reaching up to 60 fps in Full HD resolution.

It is the turn of the batteries, where we can again find some differences between these two terminals. This is because the Poco X3 Pro enjoys a great autonomy thanks to its 5160 mAh battery , compared to the 4500 mAh of the Realme. However, the fast charge of the 8 Pro takes the cake with its 50W of power, while its rival will only offer us 33W. As for connectivity, in neither of the two we will have 5G but 4G together with NFC, audio jack, GPS, A-GPS, GLONASS, Beidou, Galileo and Bluetooth 5.0 LE.

Other important points for choosing a new mobile can be found in the software. Although here each one has its own personality, since although both have Android 11, in POCO we have the MIUI 12 layer , one of the most veteran and popular on the market. For its part, Realme now has the second version of its layer, Realme UI 2.0 , which in a short time has become a very comfortable to use and quite complete customization.

What is the best purchase option? Prices and recommendation

After seeing all its features, we know that in terms of cameras and screen the Realme 8 Pro is above , but if what we are really looking for is more power and battery, our choice should be the Poco X3 Pro. And seeing its price, for Therefore, we decided to stay with the Poco X3 Pro. However, if you depend a lot on the AMOLED screen or the main camera, evaluating the Realme 8 Pro is an option that must be taken into account.