When providing power to the graphics card using the PCIe cables from the power supply, we may have doubts in the event that the graphics card needs several connectors: should you use the two connectors on the same cable , or is it better to use two cables ? In this article we will proceed to analyze this situation to get you out of doubt.

Despite the fact that, like all electrical appliances, everything tends to make the devices have more and more low consumption, graphics cards and especially the highest-end ones still need additional power to function, and in many cases there are several connectors PCIe necessary for its operation. With regard to power supplies, the vast majority have multiple PCIe connectors on the same cable, but there are times when we may have doubts about whether it would be better to connect the two PCIe of the same cable to the graphics, the most comfortable, or on the contrary, it would be better to use two different cables. One or two PCIe cables for the graphics card, which is better?

As a general rule, the need to use two different cables from the power supply to serve graphics cards with multiple PCIe connectors comes from yesteryear, when power supplies were of at least dubious quality – although it is true that today many remain so – and use many different + 12V rails. When this was the case, if the graph required more current (Amps) than a single + 12V rail could provide, it was actually necessary to use different PCIe cables.

Currently most power supplies of a certain quality (we are talking about at least Tier 1 or Tier 2 sources) use a single powerful + 12V rail, so the use of different PCIe cables is unnecessary, with the exception of that poor quality cables are used, of course. Technically, if the source only has a + 12V rail, and as long as the power and intensity requirements of the GPU are met, it will not be necessary to use two cables, and you can give the graph the power it needs with a single cable with multiple PCIe connectors.

This, we affect, can change if the power supply is not of good quality or if the wiring is in poor condition, but we are going to go into that now.

In which cases do you have to use several cables for the graph?

Although the graphics card works when connected with a single cable, there are times when it is recommended to use several individual cables, even if you have multiple connectors on a single cable. Keep in mind that this depends a lot on the brand, model, wiring and age of the power supply, but it may be the case that for example your graphic has Coil Whine , and if that happens one of the first things that You should try connecting to multiple PCIe cables instead of just one, as sometimes the Coil Whine is caused by overloading the cable precisely. 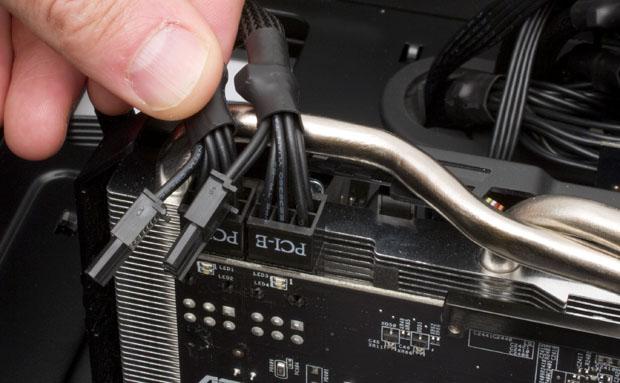 It can also be the case that even if your computer works normally, it suddenly turns off when you demand a lot of it graphically, that is, when the GPU is set to 100%. Sometimes this happens because the cable is overloaded, and as with the Coil Whine it is solved by simply connecting each PCIe connector on the graphics card with a PCIe cable from the source individually. This is because in some cases, even if the source is of quality and has plenty of power, the cable is not of poor quality, or it could be damaged or in poor condition .

Finally, it is also recommended to use individual PCIe cables from the source to service the graphics card in power supplies of dubious quality (when in doubt, use two cables) to avoid overloads, as well as sources that have multiple rails of + 12V.