In addition to having the Xbox platform , Microsoft wants Windows 10 to be the perfect ecosystem for gaming on PC. For this reason, the company allows you to use the peripherals of your console (such as the Xbox controller) in Windows 10, providing official support. In addition, it integrates tools such as the Xbox Game Bar or the social functions of the console within the operating system to unify the experience. And, although roughly it works well, and they are the peripherals that are going to work best, the support of some of its functions leaves much to be desired. And, it seems, Microsoft has no intention of improving it.

We can connect an Xbox controller (One and Series) to Windows 10 in several ways. The first, the fastest and the one that gives us the least problems is to do it by cable . Windows itself downloads and installs the drivers automatically, and, in addition, it will be like we will have lower latency when playing. The second is to do it through the official Microsoft receiver, a 2.4 GHz receiver, very expensive, but that will give us official support for all its functions. And the third, the most comfortable and used, is to connect it to the PC via Bluetooth . 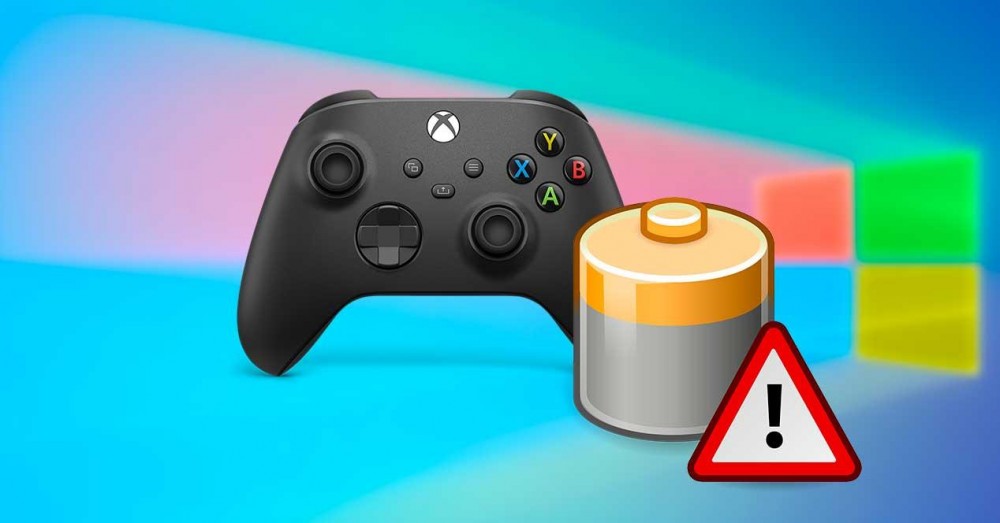 By cable, the remote is not going to give us problems. And if we connect it through its official adapter, neither. But if we opt for Bluetooth, we will have problems, especially with regard to the battery.

All the functions related to the game, Microsoft groups them within its Xbox Game Bar, the game bar of Windows 10 . And, of course, in this panel we can find an indicator that shows us the battery of the remote control at all times. Of course, this indicator does not work.

As we can see, the battery indicator of the game bar shows a critical battery level , while Windows 10 itself makes it clear that the controller’s battery is at 100%. This occurs both with a battery in the remote, and with normal and rechargeable batteries, as we have seen.

And the problems do not stop here. For a relatively short time (probably as a result of a recent update), Windows has started to constantly show, while we play, notifications indicating that the controller’s battery is in critical condition and that it is going to be disconnected. Obviously, this is false, since the battery, or the batteries, are at 100% charge.

The interruptions are such that, on two occasions, Windows 10 has given a blue screen just after sounding the notification sound and showing half a warning window of the controller. The BSOD bug has been generated by ntoskrnl , that is, a critical failure in the system.

Unacceptable failures on a gaming platform

If Windows 10 wants to win over gamers, you can’t afford these glitches. And much less with the official command of the company. We can understand that, for example, it fails with the PlayStation controller (as it does not have official support), or with a controller that we can buy in the Chinese. But with Microsoft’s own Xbox controller… it’s unacceptable.

The Windows problem lies somewhere between the Bluetooth controller and the Xbox controller driver, as other programs that read the information from the operating system, such as Steam Big Picture , also display the battery data incorrectly.

We hope that these problems will be solved soon, although if we take into account that in the Microsoft forums they have been talking about these problems for more than 6 months , and they have not yet been solved, we do not believe that now, suddenly, they will solve it .