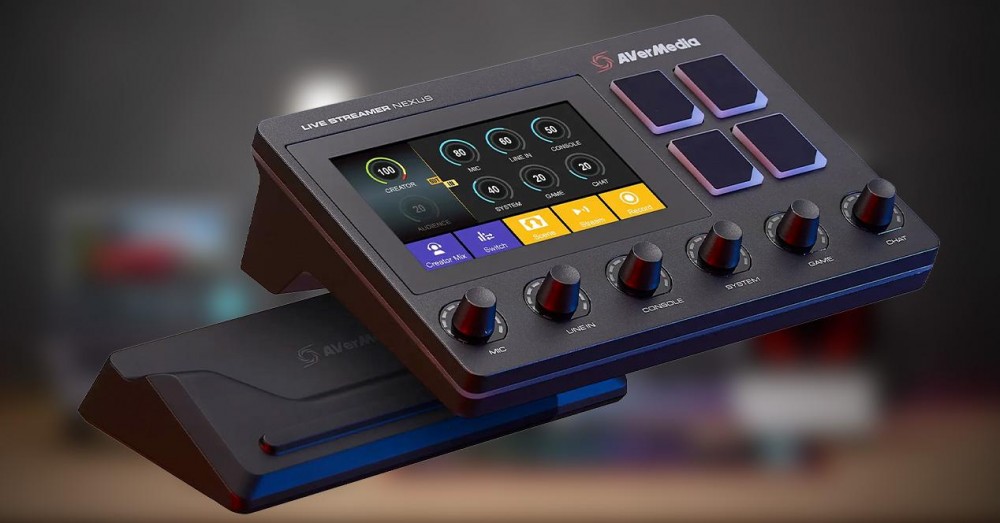 We have already seen that to have the best streaming setup with which to succeed on Twitch it is necessary to equip yourself with a large number of devices for endless intelligent functions, and this latest accessory from AverMedia may make things a little easier for you. when organizing your broadcast table. Do you want the best technology for your streaming? Well, take a look at the Nexus AX310 .

With a particularly striking design, this control center is something of a hybrid between a mixing console and an interactive keyboard, since it has a 5-inch IPS touch screen from which we can control an infinite number of aspects and functions thanks to its software customizable Live Streamer Nexus.

And it is that we will only have to connect the table to our computer to define the panels that we will have available on the screen, in order not only to have specific controls of applications and extra functions at hand, but also to have, for example, the preview of your channel’s chat from Twitch so you can read incoming messages.

One of the peculiarities of this table is that it has quite a few entrances. It basically raises a configuration that will cover all kinds of needs of any streamer, since it has:

With all these inputs we will be able to design a very complete configuration of a broadcasting table in which to have a microphone and all the necessary tools and audio inputs to have a very complete setup with which you will not miss anything.

The customization possibilities of this Nexus AX310 mixer are endless, since we can configure shortcuts to pre-configured OBS scenes , as well as being able to control the audio of the broadcast with an amazing level of control, since we can only carry the sound of the game to headphones and broadcast all audio, including microphone and game to live broadcast. As you can see in the product presentation video, the possibility of making a gesture on the screen to show more pages of controls makes this product an extremely complete solution for all types of users, regardless of whether they broadcast video games, podcasts or recordings in direct.

The price of this AverMedia Live Streamer Nexus is 365 dollars for the United States market, and although in Spain we still do not have an official price, we imagine that it will be around 350 and 400 euros. We have contacted the manufacturer so they can tell us something about it, so we will update the news as soon as we have an official price for Spain. With those features, it was to be expected that the product would be priced higher than you might expect, since we are talking about a mixing console and a smart controller with a 5-inch screen in the same device. IF with this you do not increase the number of subscribers we will not know what else to do.