When we talk about programs that help us when carrying out design work on the PC, there are several programs that we can use. One of the most popular and loved for many years is Inskscape , which is also about to receive a new version.

Here we refer to a powerful software proposal to create vector graphics that has been with us for a long time. Well, we are talking about this application because before the launch of the new final version Inskscape 1.1 , its developers need your help. Thus, in the event that you are part of the many users who use this free vector drawing application, you can do so by testing the new Beta version released. At this point, we will tell you that in the field of software to create vector graphics, many know Adobe Illustrator or CorelDRAW . But these are paid programs that find a tough competitor to Inkscape, a free program that has carved a niche for itself in the digital art community.

Why Inkscape is worth using

As many of you already know, here we find a vector editor that has been free to use since its launch in 2003. To this day and after a hiatus, it is still being developed and improved, as evidenced by the imminent launch of its new version . It is worth mentioning that if everything goes according to plan, the expected new version of Inkscape 1.1 is expected to be made official in the coming months. But with everything and with it, but in the meantime you can download the Beta from its official website to test it and help improve the project.

As expected, here we find several interesting new features such as a new welcome dialog. 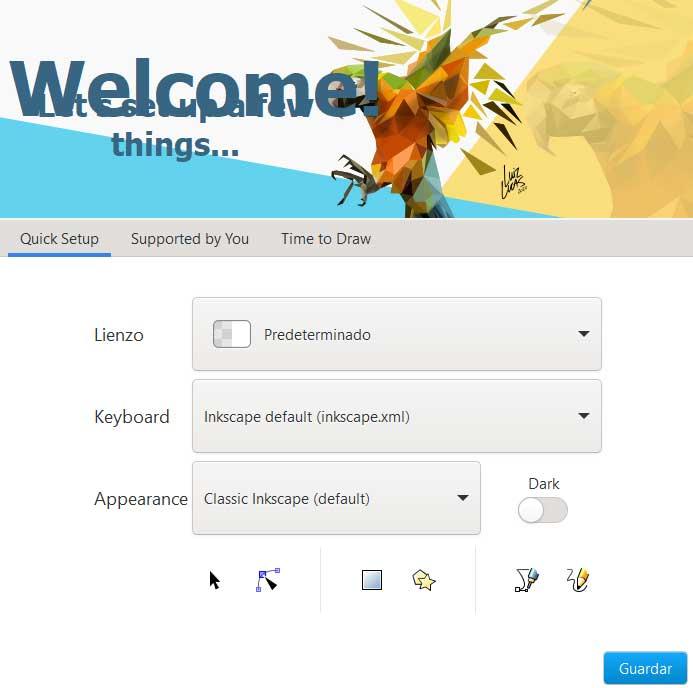 This allows us to select the theme of the program interface, as well as the size of the new document that we are going to open. In addition, a command palette has been added to search for specific Inkscape functions. In the event that we do not remember the keyboard shortcut of a function or where it is in the menu, this will help us.

It is logical to think that this long-awaited new version that we can already test from this link , many new features have arrived. For example advanced functions to copy, cut and paste parts of paths, or a new anchoring system.

We also find a new contour overlay mode that shows the contours of the objects and their real colors, or automatic export after saving. On the other hand, it is worth mentioning that its developers have made more than 200 changes and bug fixes since the alpha version.

In case you are interested in trying and collaborating in the improvement and correction of the new version 1.1, the vector drawing program is available for Windows , Mac and Linux . It is also important to know that it works mainly with the SVG scalable vector graphics format, and these can be imported and exported to others such as PNG , PDF DXF, etc. All this in order to render vector shapes such as rectangles, ellipses, polygons, arcs, spirals, and much more. We can also work with text, colors , patterns, gradients, etc; simply and at no cost.