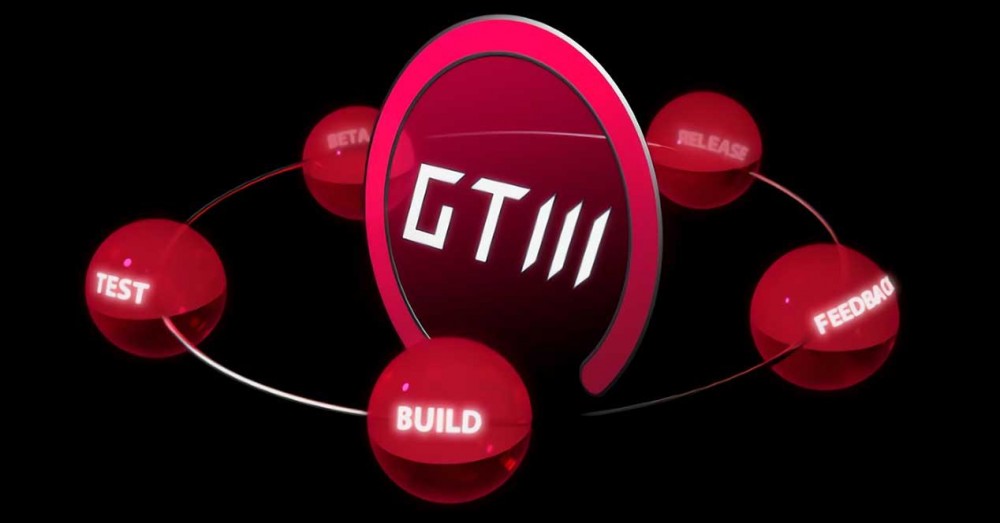 The increase in the consumption of graphics cards and the nullity of innovation in dissipation systems have made more and more users demand more complete control and monitoring software, easier to use and that consume less PC resources. ASUS has listened carefully and therefore now has the third version of its flagship software for these purposes, but what does ASUS GPU Tweak III provide compared to the rest?

It is necessary a GPU monitoring software in these times, not in vain can values such as temperature, consumption or RPM of the fans go hand in hand. For this reason and to compete against the best ASUS has remodeled its flagship software and now offers more features than ever. 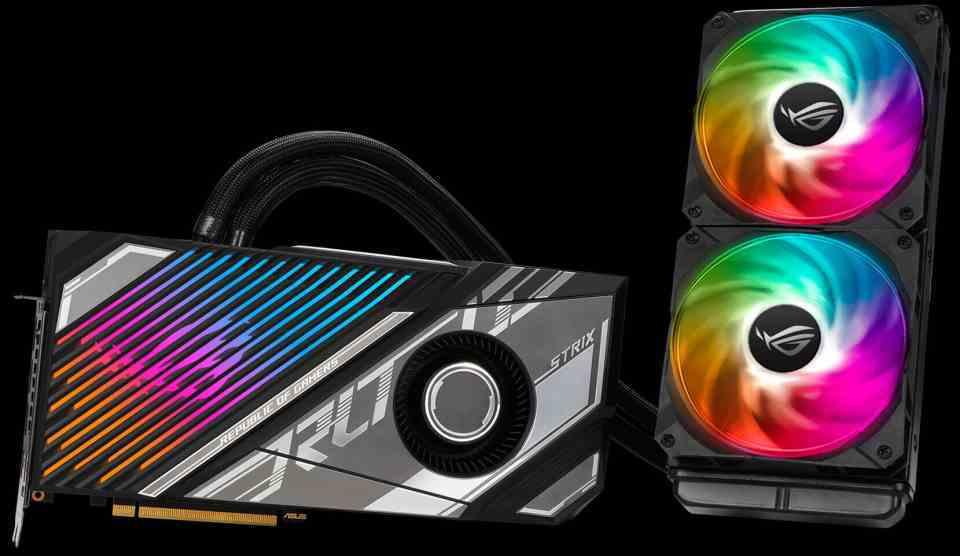 ASUS has had some years where it couldn’t compete with other more powerful software like EVGA Precision or MSI Afterburner, but it seems that the company has understood that software is as important as hardware. With this in mind, he has designed a new program that maintains the essence of its predecessor, but leaves behind a series of quite interesting new features.

Although the reality is that ASUS at the time of writing this article has only published its GPU Tweak III as a beta, from what we have tested we can say that it is really stable. Therefore, in the download area of your website we will not find stable versions yet, but a single Beta version called 1.2.1.1.

You can download this version by following the following link:

What stands out the most once the software is installed with the typical next, next, next (it has no science whatsoever) is the graphical interface, totally renewed for the occasion and with which it leaves us a series of options and much more intuitive graphics. 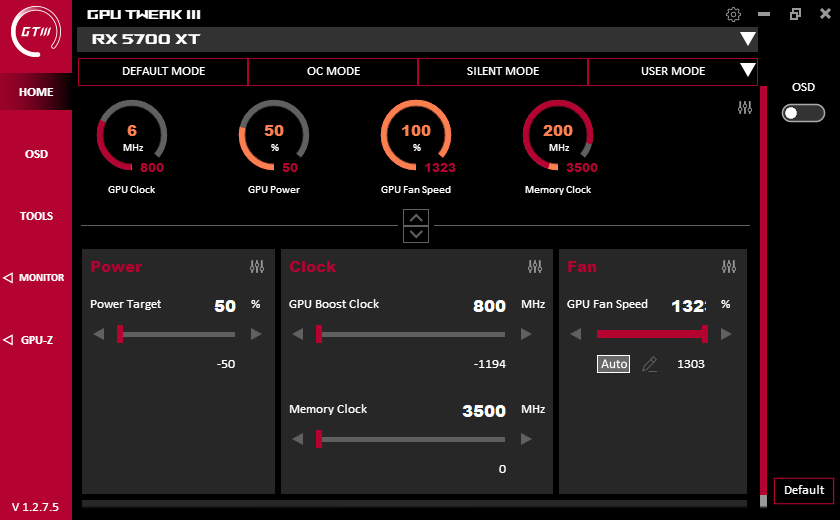 As we can see, everything is centered on the left side, since there are the different options to choose the menu. The first one that is the one that is set as standard is Home and it leaves us the configuration options for the Power Target, the GPU and VRAM clocks and the fan speed (bad reading in this case because the GPU has a block of Water).

As we can see, we have four options to choose from, three of them predefined, such as the default mode, the overclock mode and the silent mode. The fourth is the manual mode, which will simply let us apply the values that we tell it within the predefined limit of the card (if it had it, as is our case). 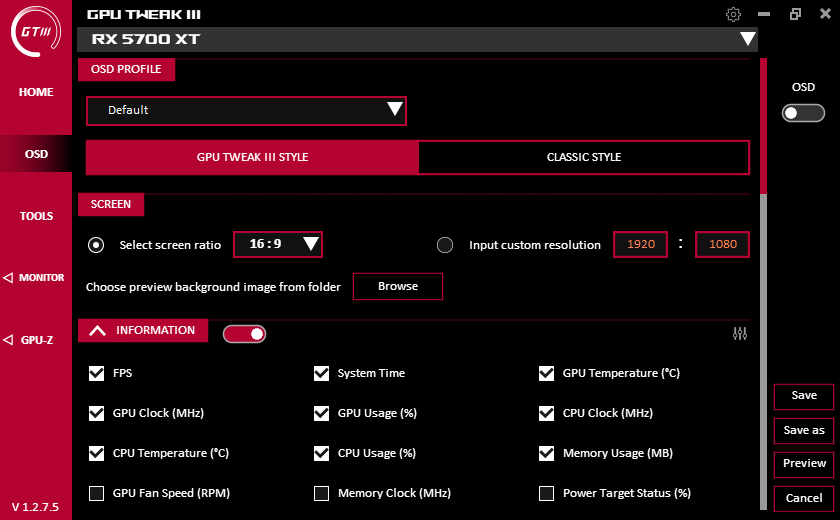 Despite the fact that on the right side we have the OSD button, the program itself has a section to configure it to our liking. These options will define the monitoring on screen when we are playing, so it is important to spend time to define sizes, fonts, position and values that we want to see in real time in game. 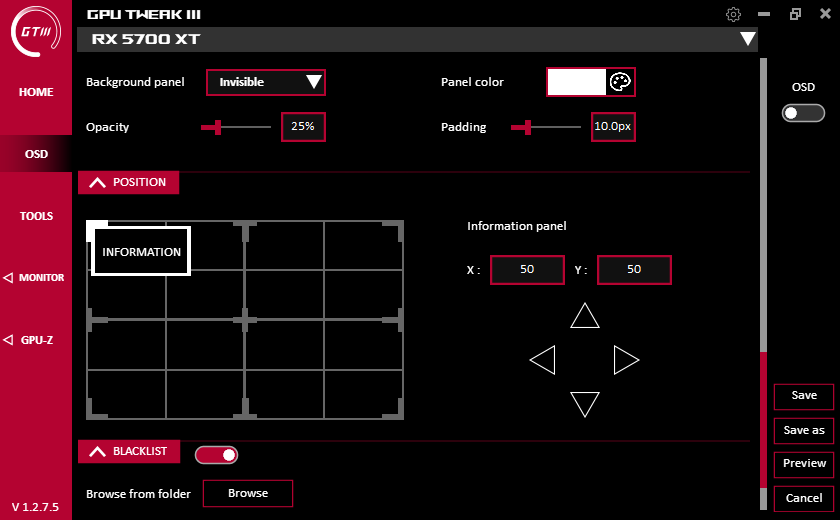 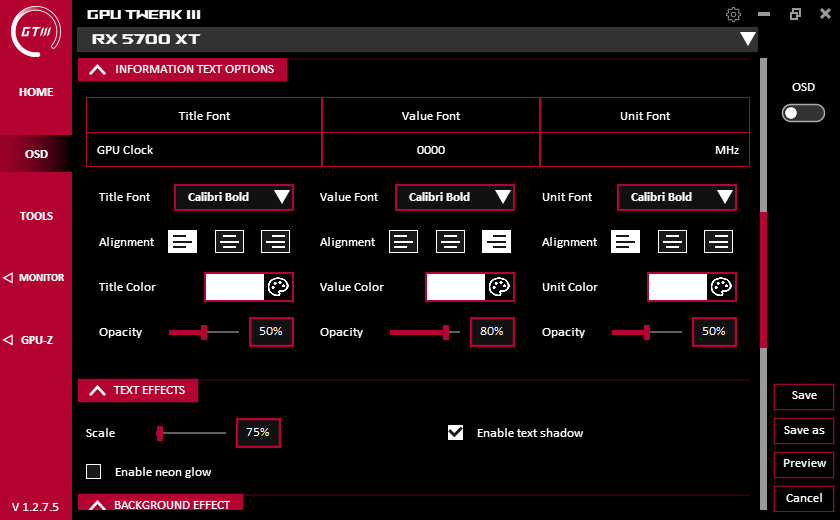 The position and opacity options are striking, without forgetting the padding, all very complete and reflecting that the customization is extremely high. 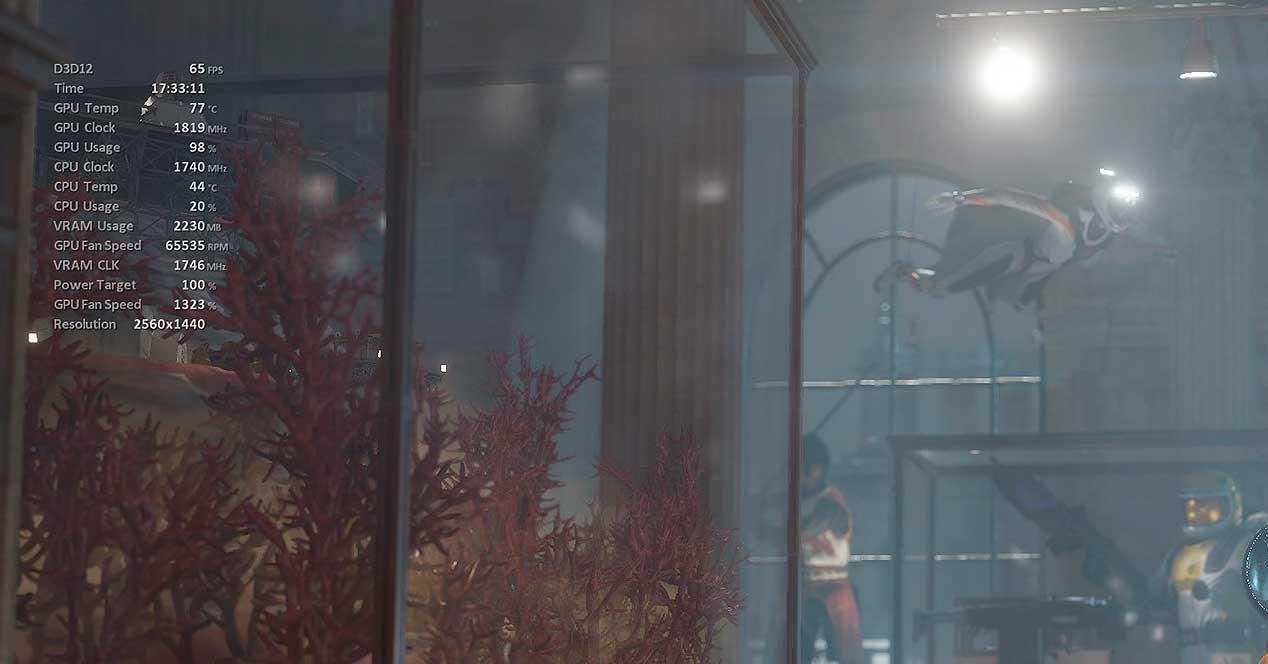 The result with everything enabled and to our liking is reflected like this, simple to read, translucent, with white letters and everything well organized, but as we say, it is completely customizable. 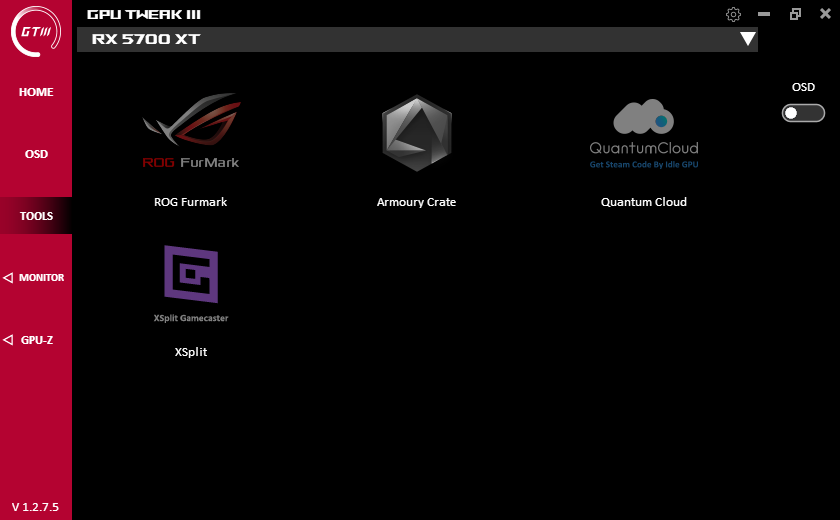 ASUS gives us the option of downloading several of its software utilities to complete the offer it brings to the table with Tweak III. We can free download your Furmark GPU stress software in ROG version, Armory Crate component and lighting control software, your Quantum Cloud or XSplit cloud management system for live streaming.

Although it may not seem like it, the program will allow us a more exhaustive control within the OSD panel itself, but for this we will have to slide to the monitor menu and then we will have a second side tab attached to the one we are working on.

This tab can be unlinked from the first and original one by clicking on the icon that joins them in the form of a chain. What we will see in this new tab is precisely all the GPU parameters in real time with the novelty that ASUS not only shows the current value every second, but now allows to show the maximum and minimum value of each one of them.

We can export logs and import them and above all show the information in a much more graphic way. At the top left within that same tab with the values there are two options: line view and column view. The normal thing is that we are within line view, but if we click on column view, what we will have will be the same information displayed in independent graphs, which allows us to see the evolution of each value in a time range that cannot be modified. 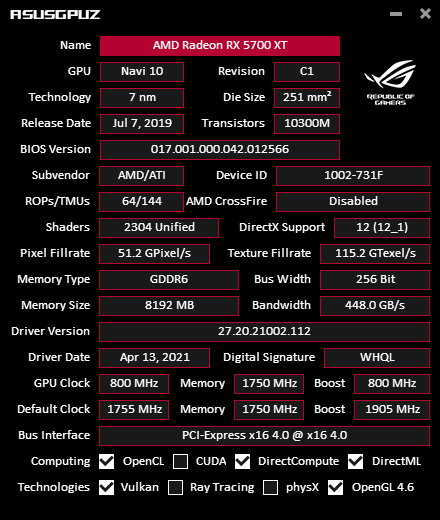 The last setting of ASUS Tweak III is GPU-Z, a program that normally comes separately and must be downloaded and that we will have here as a utility within the ASUS software itself. In addition, it comes fully personalized with the theme of the same, so it is more than interesting to have all the specifications of the card at a click.

It is true that it is not as complete as the original GPU-Z due to the lack of options that it includes, but it is a lite version that is always good to have on hand to check any parameter of our GPU.

To finalize the options of this software we will have to go to a button that is in the upper right part of it, right next to the minimize button and which is shaped like a gear. Within it we will have four options available as can be seen in the following images: 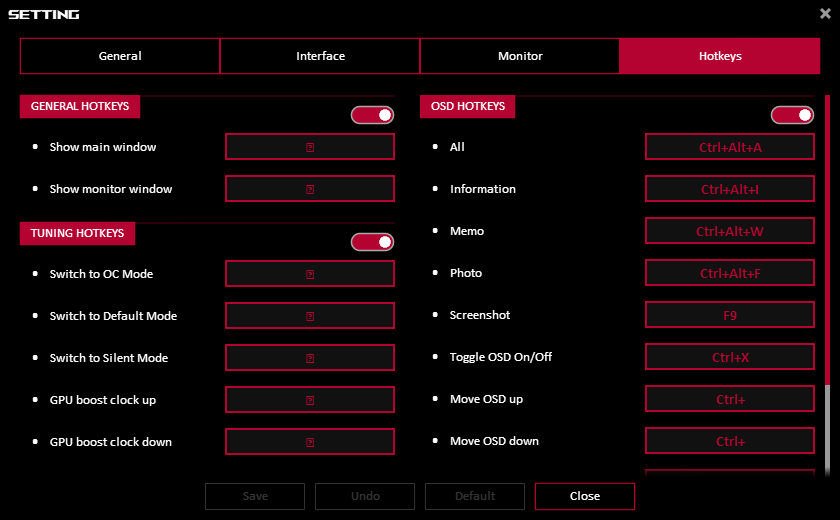 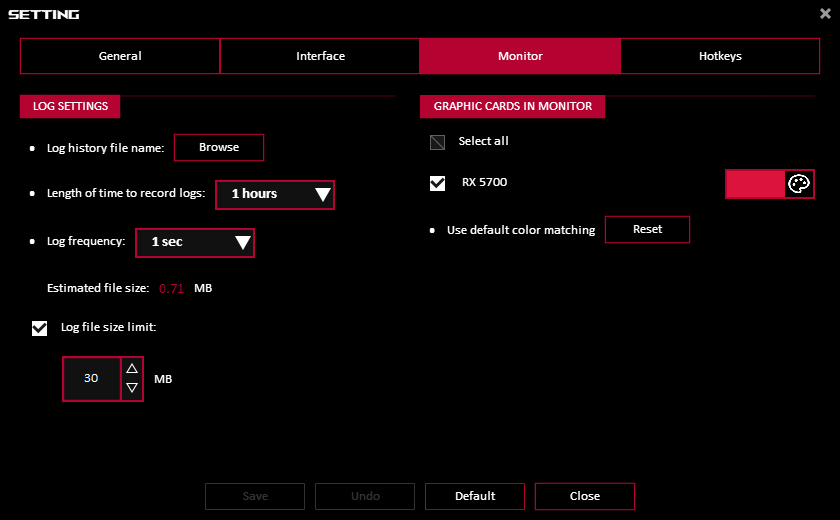 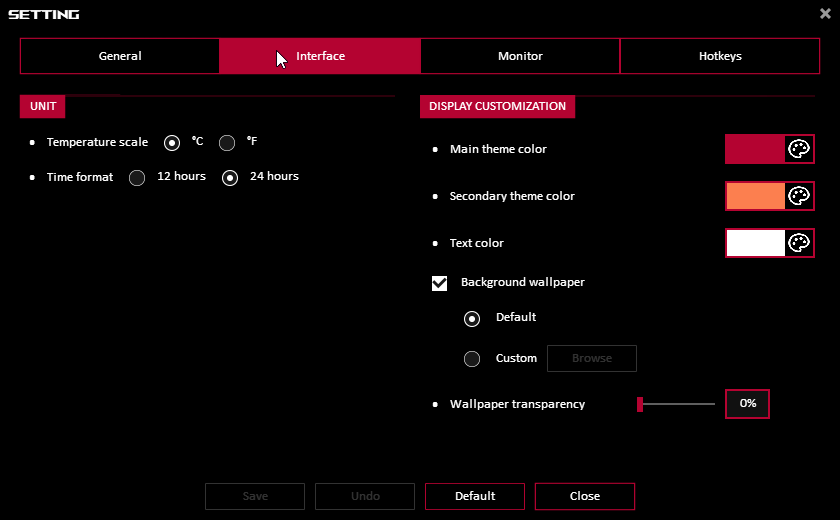 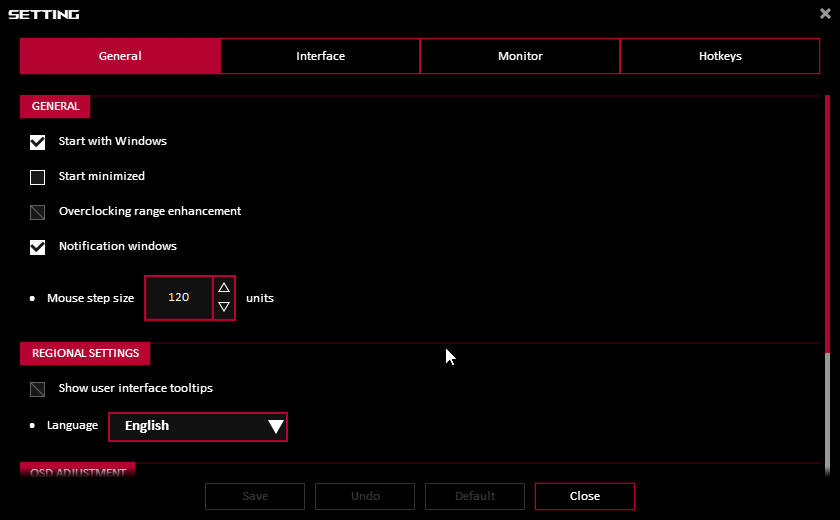 In these tabs there are options as interesting as the extended range of overclocking for the GPUs that allow it, the fact that the program starts when Windows loads fully automatic, to be able to put said software to our liking in terms of colors and text, wallpaper even, certain monitoring options such as logs and of course the Hotkeys to configure them to our liking and launch profiles, OSD, screenshots or even configure the boost of the GPU at the moment.

As we can see, the new version of this software is tremendously powerful and improves with each version, so it is more than likely that as ASUS is listening to its community, extra features will be added over the months.