The A14 Bionic chip in the new iPhone 12 is probably one of the device’s strongest points. Although it was understandable that it surpassed its predecessor, the A13 Bionic, we had the doubt of knowing if it surpassed the chipsets of its Android competitors. And he has, well he has.

Even the iPhone 11 A13 outperforms the Snapdragon 865

With the iPhone 12 and 12 Pro already in the hands of many media, the first processor performance tests have been made. It is true that it is not everything in a device, but it is important for everything: opening apps, performing heavy tasks, managing the battery or receiving software updates. Although the latter is somewhat relative on Android, since except for the Google Pixel, most have a lower longevity regardless of the processor. In Tom’s Guide they have performed a performance test through Geekbench 5 to the iPhone 12 and have compared the data of their A14 Bionic with the main exponents of the competition. Samsung devices like the Galaxy Note 20 Ultra, the Galaxy S20 Plus or terminals like the OnePlus 8T are left behind. We remember that these devices incorporate the Qualcomm Snapdragon 865, except for the Note 20 Ultra that carries its ‘Plus’ version.

The fact that last year’s processor from Apple also outperforms these processors stands out. The score obtained by the iPhone 12 and 12 Pro has been 1,593 and 1,585 in single core respectively, while the A13 in an iPhone 11 Pro Max has obtained 1,334 points. Much more than the 985, 811 and 887 of the Note 20 Ultra, S20 Ultra and OnePlus 8T. The difference in multicore is also substantial, as you can see in the table below. 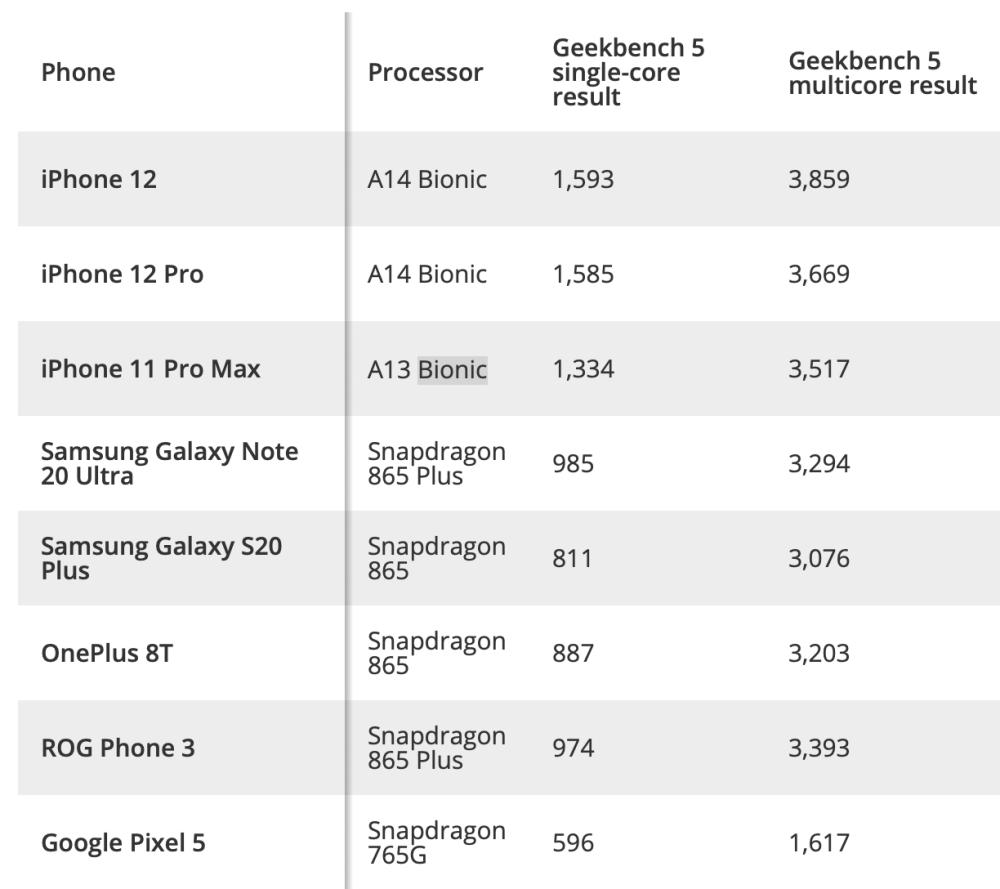 The iPhone 12 are also better in other respects

The iPhone 12 and 12 Pro have also been subjected to arduous tests in terms of their graphics performance , although to the surprise of many it has obtained a lower score than the iPhone 11 Pro Max, but more than Android devices. 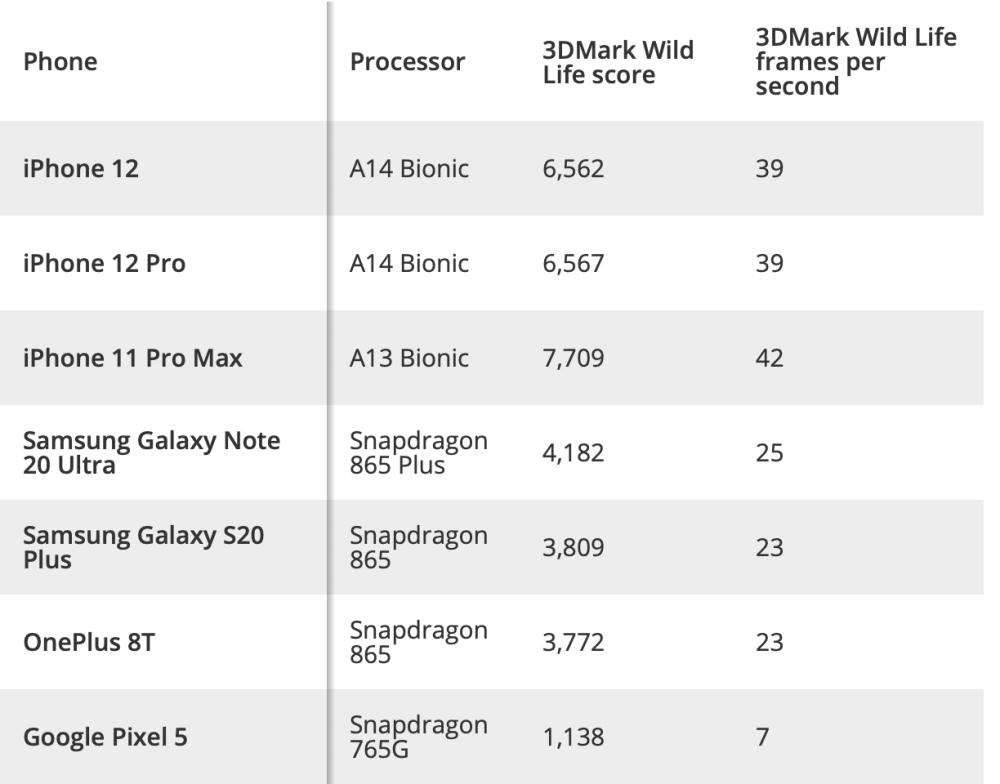 In matters of heavy processes such as video editing, the capacity of the A14 Bionic is also surprising. The test was done with Adobe Premiere Rush, calculating the time it takes to transcode a short 4K video to 1080p. Well, the iPhone 12 and 12 Pro have taken 26 and 27 seconds for the 45 of the 11 Pro Max. Almost a minute and a half the last Samsung Note leaves and almost 1:40 the OnePlus 8T. 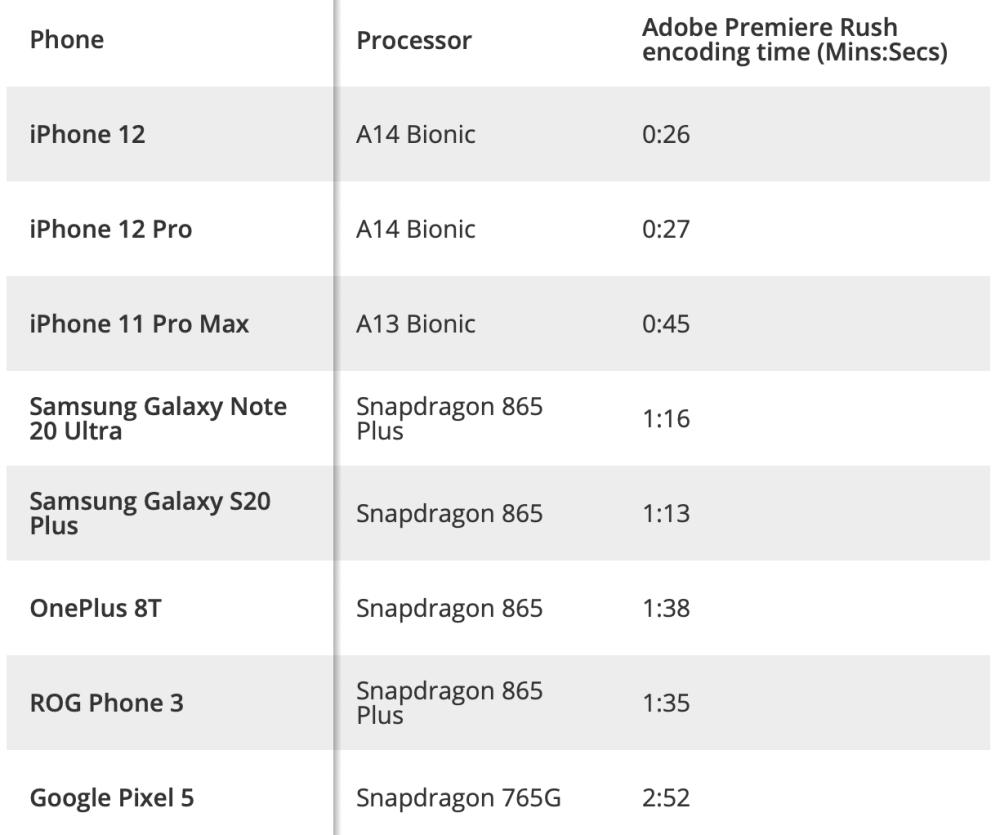 These are not the only data obtained these days, but one of the most interesting due to the amount of tests carried out. In the vast majority of tests it has been found that the A14 surpasses its rivals, something that the A13 Bionic already did with some solvency. Not surprisingly, this processor is the first from Apple to be built with a size of 5nm, this being something unthinkable only a few years ago. We will see if all this raw power is finally transferred to the expected Mac with Apple Silicon.