Apple wants to improve the sound quality in all its products, and the next candidate to improve is the MacBook Pro. This is what has been seen in a recent Apple patent that shows an audio track processing system for simulate that it comes from another address such as behind the user. In this article we tell you all the details of this patent.

Apple will bet to improve the sound on its Mac

Thanks to this feature, the audiovisual experience would be greatly improved. When watching a movie or series on our Mac we would have an investment experience. This is the clearest example to understand patent number 10,524,080 entitled ‘System to move virtual sound away from a listener using a crosstalk cancellation’ . 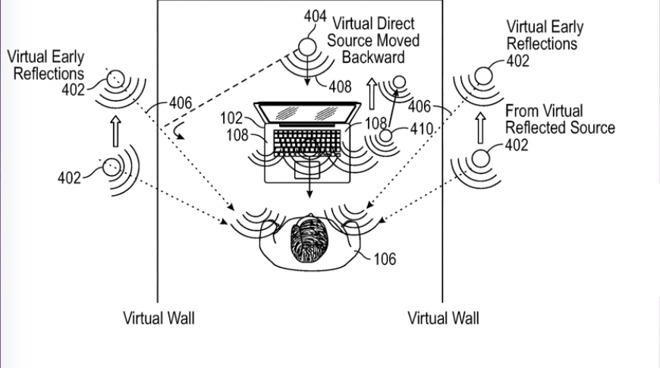 The patent explains that several known audio processing algorithms would be used to be able to modify the recorded audio signals. With this processing it will be possible to place a virtual sound source taking into account numerous factors such as the role of ear acoustics, reflective surfaces or distance and angle of origin.

In addition to implementing this processing system in laptops, reference is also made to what could be implemented in the headphones . This would be tremendously interesting to have a great experience.

In the case of the Mac speakers, what would be used is a crosstalk cancellation that is already used in some virtual acoustic systems to be able to produce sounds from multiple speakers so that the ‘left sound’ is heard in the left ear and the ‘right sound’ is heard in the right ear. With this system, what is achieved is to create signals that allow placing a virtual sound in a specific position. This is a system that we already see implemented in the HomePod so it would not surprise us that it ends up seeing on future MacBook or other computers.

The authors of this patent have many similar ones already presented. This is why we are facing some sound professionals who can revolutionize the speakers of our laptops and also of future AirPods. But this patent can stay in a simple drawer or go to the market if it is implemented in a future product of the company that is what we expect because this idea looks pretty good.