He was presented, he was well received, desired and after that the most absolute silence except for slight annual stitches. Microsoft DirectStorage as an API for gaming is a leap that gamers and developers need to be able to take the next step in gaming, but for some reason it doesn’t stop slowing down and the answer to this can be quite peculiar: AMD, NVIDIA and Intel want their own version. For this reason, those of Lisa Su have been working for many months in what they have called SAS or Smart Access Storage , of which we now have news.

It is not that sensitive information about the API in question has been leaked, what is more, it is the first news on this subject, since everything was betting on the fact that Microsoft finished it to implement it as such, as if It was DirectX, but it seems that the big three could have different plans. Well, that is what is rumored, mainly because, as we have mentioned, those from Redmond have not finished launching their API and AMD may have designed its own way of obtaining all the advantages of this technology by making it its own for its hardware.

They design CPUs and GPUs after all, so a custom implementation of Microsoft’s technology wouldn’t be a bad way to go.

The hypothesis that reigns behind the scenes right now is that Microsoft could have designed the API as such and have ceded it with certain interests for further development to AMD, NVIDIA and Intel , so that each one could adapt it to their hardware.

What has been confirmed and is a greater surprise is that the first equipment that will integrate it will be the CORSAIR Voyager, a laptop that will be the brand’s first attempt to enter this sector and that it would be scheduled for some point in the month that comes.

We already know that Lisa Su will attend this event and that she will make several presentations, among which will surely be this technology AMD Smart Access Storage or SAS , as it seems that the red team likes to call it.

What is it that this technology will do for us to say that it can change the course of gaming? Basically it improves the interconnection, access time, latency and with it the load of the games between the SSD or HDD with the RAM and the GPU, unloading a job that the CPU was now doing.

The way AMD SAS works is similar in theory and concept to DirectStorage, since it would leave aside the CPU to focus on connecting the storage with the graphics card and its GPU through a PCIe NIC. This technology is similar to NVIDIA’s implementation with RTX IO , where, as we see in the lower slide, it seeks a goal that is practically identical to AMD SAS. 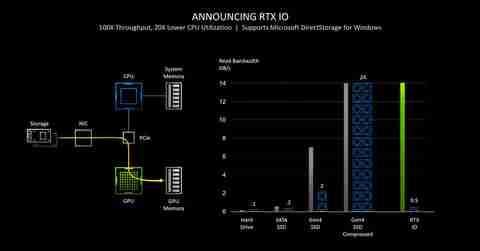 In other words, the graphics card can directly access the SSD or HDD without having to go through the processor, which implies a reduction in access time and with it the total latency of the system to load textures or local files that the engine needs. of the game.

Therefore, AMD SAS could be a software layer that either simulates the operation of DirectStorage or optimizes it for the manufacturer’s hardware, as we have seen with other technologies such as Adaptive Sync vs FreeSync.