If you are a regular on this website, it is likely that this title already sounds to you because you have qualified on one occasion as one of the best aircraft games for iPhone and iPad. This time we analyze this Airline Commander in more depth that guarantees hours and hours of fun from your iOS or iPadOS device.

Airline Commander, what is it?

First of all it is worth knowing what exactly this game is. We know it is a flight simulator, but what kind? Well, one of the most complete you can find and with which we can play without paying anything. It is true that the game includes some payments to access certain content, but it is not mandatory to pay and in fact you can get that content over time and for free.

The most positive thing about this game and what probably best characterizes it is that it offers continuous learning . We often find simulators that, if we don’t have too much idea, we end up uninstalling by overwhelming ourselves when we see the controls.

In Airline Commander we find tutorials in the form of exams. That is, first we have a type of plane and we learn to control some things about it and at the moment we show how to handle it, it is when you start earning points in the form of virtual money from the game.

There comes a point in the game where you control more and more powerful airplanes, face more emergencies and handle countless controls. But all this in a natural way, as if you were really preparing to be a professional airplane pilot. At no time will you encounter a situation that has not been explained to you before, so frustration has no place in this game.

The Airline Commander interface stands out for being tremendously intuitive. As soon as we pass the loading screen, we find a panel in which we can distinguish several parts.

At the top of the whole we find several indicators in which we can check on what level we are, how many experience points we have, the money we have (not real, but the game) and the credits we can buy with real money to access Some content 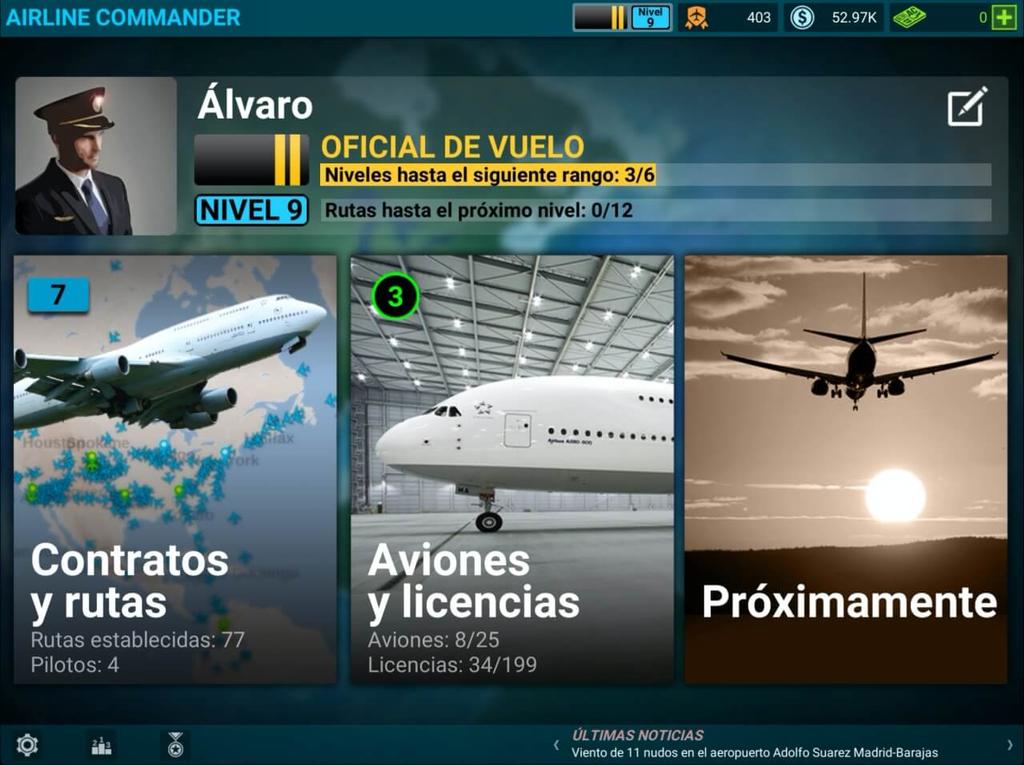 Below we find our profile. Here you will see your name, the flight range you have as a pilot, the level and an option in which you can edit the color of your airline’s planes.

Below we find three sections, the third of them being an unavailable one and in which there is a “Coming Soon” sign, which should be a future functionality of the game that has not yet been revealed. The other two sections deserve to be analyzed in depth.

To highlight is the bottom, in which in addition to adjustments and ranking of other players we will find a part in which achievements are unlocked. These are varied, such as accumulating 100 flight hours, having completed 300 landings and many more. When these are unlocked you are rewarded with credits, the same ones that you need to pay with real money to get, but in this case for free.

Accessing this part we find a map of the world that serves as a game panel. Throughout the game you will have access to different airports anywhere on the planet. At the bottom we find the hangar , the place where we can see the entire fleet of planes that we have obtained and the respective licenses we have with them.

By clicking on “ Offers from other airlines” we already find the possibility of starting to fly a plane. In orange will appear the routes of your own airline with which to earn points. To stand out is also the daily challenge , in which you will be able to face other players in a small challenge, this being the closest in an online way we have. 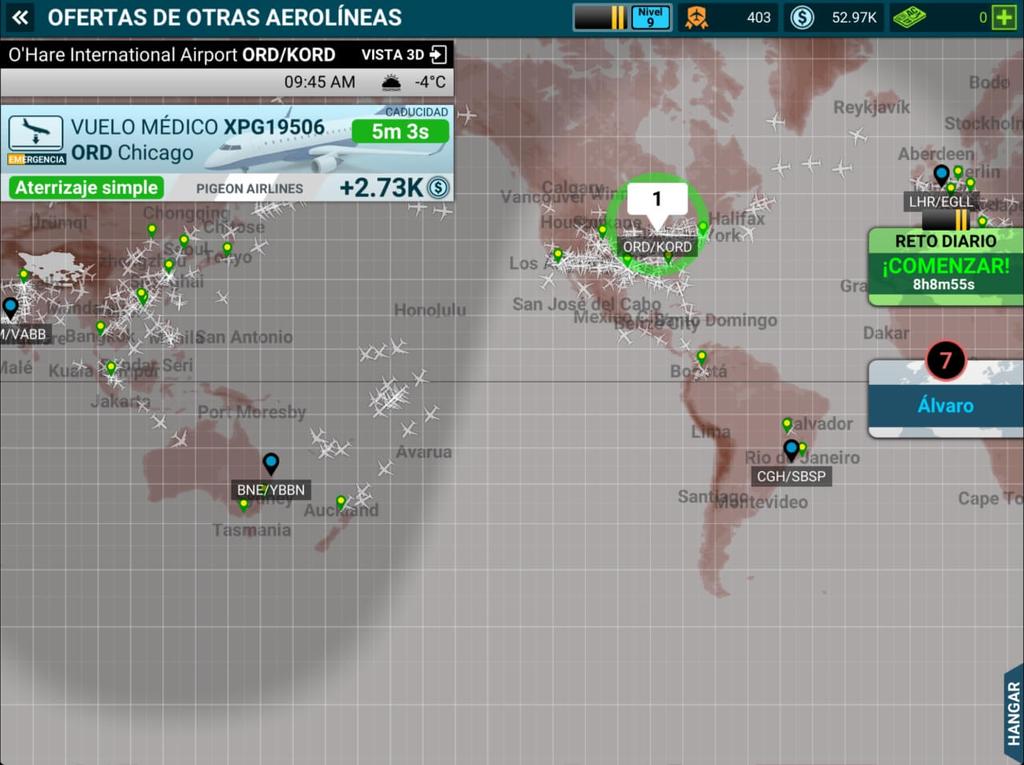 To access the flights you will have to click on the corresponding numbers that appear in each airport, which indicate the number of offers we have in each of them. In the flight information we are told several things: the name and flight number, the time we have to access the offer before it expires, the money we will earn if we complete it perfectly, the level of emergency and the type of flight that is, being able to find several types:

This is the part where you will be less hours of the game, but it is the most important to move forward. Here you will find the available planes to buy depending on the range you have, being able to buy the largest and most powerful aircraft as you acquire capacities . 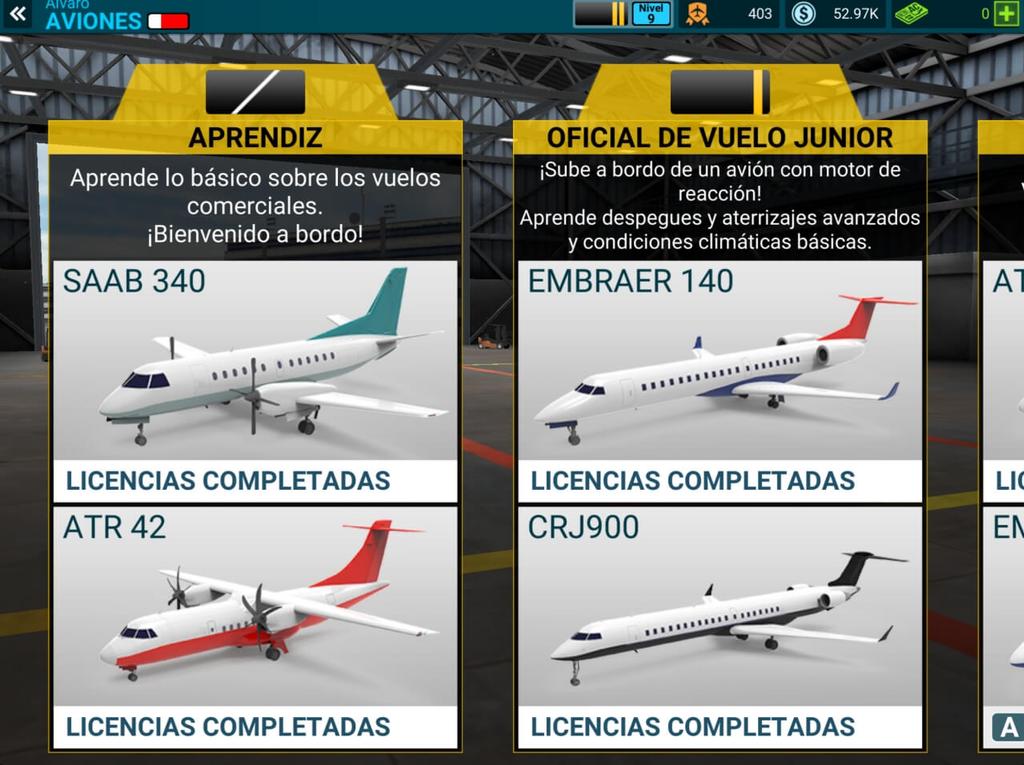 Buying each of the planes will unlock the different licenses related to each one. With the first airplanes you will acquire knowledge about the controls : the take-off and landing flaps, the engines and everything that concerns them, the autopilot for the flight and many more.

Also in these licenses is the possibility of dealing with emergencies . Each of the exams taken will require a payment with game money, but once you have access to it you can repeat the exam as many times as you want and even practice when they are already approved.

The controls, keys in this game

As we said at the beginning, this game attracts attention by not offering us all the controls from good to first and turning our first time playing into chaos and therefore increasing the chances that we will end up uninstalling it. In Airline Commander everything follows its natural process and you will know all the controls as you exceed levels. 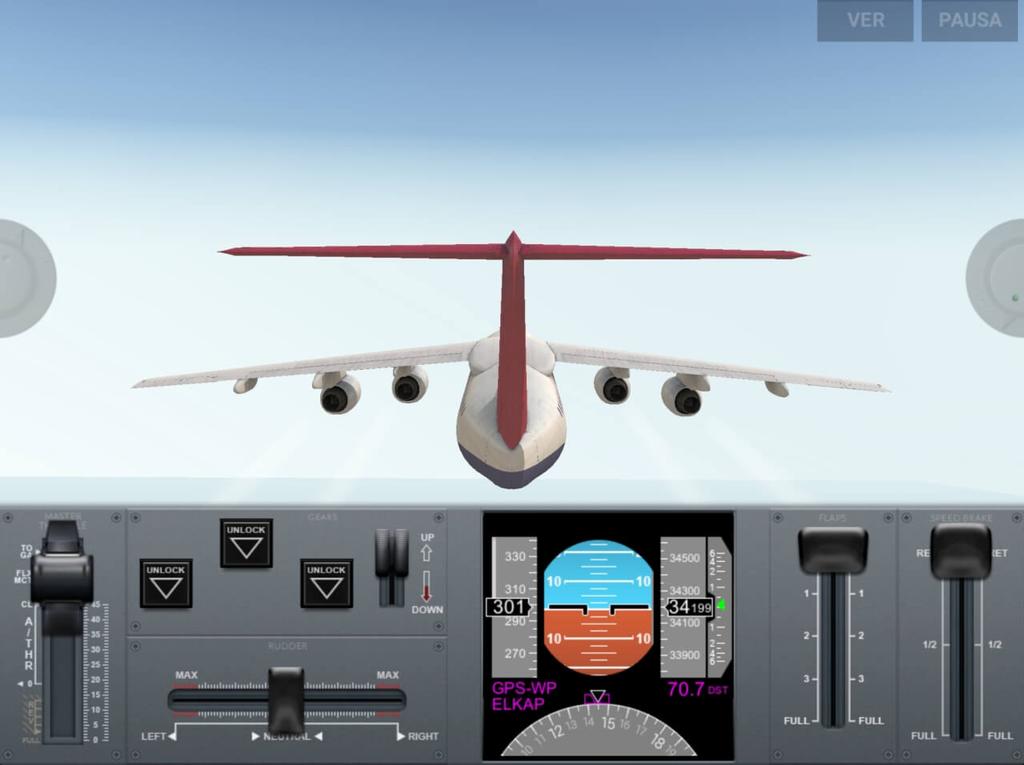 We are not going to fool ourselves, and if you want to be a pilot in real life you will not have it easier for this game because it is precisely that, a game. But without a doubt that you will become more and more familiar with the technical jargon that is handled in this sector thanks to knowing that they are the flaps, so that they serve many of the controls in the cabin, which should be done if an engine explodes or how to stabilize the plane if one of the sides is losing fuel.

Ads not necessary, but very helpful

We love this game for not having mandatory ads that have to be watching every two by three to continue playing. You can, if you wish, complete the game without having to see a single ad.

But yes, being there and sometimes they are very useful. If, for example, you want to speed up the time you need to take a flight or want to get extra money at the end of each route, you can see an ad of 20 or 30 seconds.

These will also serve to subtract the stopwatch when you are going to examine yourself for a license. Although in this case it can be somewhat agonizing, since as a general rule it should take between 1 and 4 hours from when you pay a license until you examine yourself and each ad remains only 5 minutes.

Airline Commander is the most complete free game that we see in the iOS and iPadOS App Store with this theme. It has some drawbacks, such as the fact that the game gets too slow sometimes to keep up with the natural rhythm of a pilot and his learning.

The graphics are also improvable, and while the planes are very successful, the truth is that the landscapes are somewhat artificial to be mapped that are sometimes pixelated. 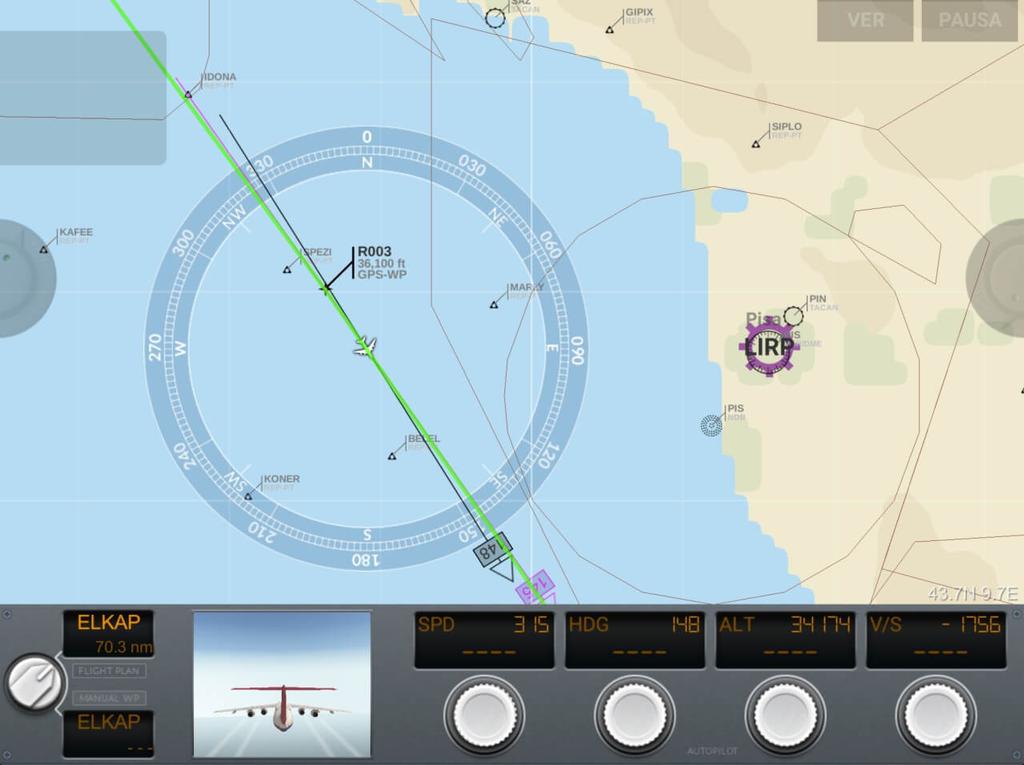 However, it is much more good that this game offers us, such as its realism in flights and the sound so close to reality. I personally have been playing this game for several months, playing practically every day with my iPad, although the experience is also quite positive on iPhone. It may happen at the beginning as another game, but if you like its mechanics and the environment of the airplanes you will fall in love.