With fiber optic connections, it is less and less likely to encounter problems when using the Internet, either in terms of speed, stability or latency . However, there are many situations in which we can continue to experience problems in our connections. Most users connect to the router via WiFi on their devices. It is the most comfortable option, but it can also be the least reliable . Depending on the quality of the router that we have at home, we may have speed problems that can have a multitude of causes.

The most common is usually a scope problem. To solve it, it is convenient to use a repeater or a WiFi amplifier, where the first one replicates the original network in an access point via ethernet. The second amplifies the WiFi network, which is the least desirable, but there are situations where this is the only option available.

Second, another of the most common problems is WiFi saturation . If we are many people in a household who are using the Internet constantly, even if it is something that does not require too much bandwidth, the router may have to be exchanging information between a multitude of devices at the same time. If our router does not have MU-MIMO and several independent channels, speed and stability may be affected if we are sharing channels with more people, with unstable packet loss and latency . Therefore, updating the router may be a very convenient option.

If you have made yourself an Ethernet cable, or are using a rather worn one, you may still have speed and stability problems despite using a wired network. If you use a cable with a broken plug , or the clamp does not bite the cable well, some internal cable may not be making good contact , and that generates connection problems. Check the terminations of the cables, as well as the distance at which you have them connected.

Things downloading in the background

If there aren’t many devices in your house, but you’re still having connection problems, one of those devices may be using excessive bandwidth without you noticing. For example, the computer may be downloading an update for a game or the operating system itself, or that you have left the torrent open. 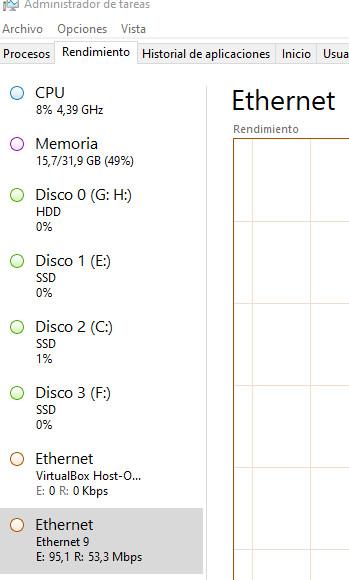 If you only use one computer, it is good to look at the Windows Task Manager to see if something is using bandwidth, as it may even be the operating system itself.

The computer has a virus

If you look in the Task Manager, and you see that there are some unknown programs or files using a lot of bandwidth, you may have been infected with malware. Something very common that attackers do with infected computers is to add them to so-called botnets . With them, they use hundreds or thousands of devices at the same time to launch a DDoS attack on a service or a website. And your PC may be part of one, so scan it with a good antivirus .

It may not be your problem

If you have not done anything strange in your connection and the devices that are connected are the same as always, the connection problem may not be yours. If you are watching content from a streaming platform, for example, and it is cut off too often, it may be a problem with the platform itself.

The most comfortable solution is to carry out a speed test to see if the problem is yours, your operator, or the service you are trying to use. It is possible that your operator may be having saturation problems if there are many people using the Internet near you and all of you depend on the same fiber cable. In those cases, the only thing you can do is wait for it to desaturate.