UL Benchmarks recently updated its popular 3DMark benchmarking software to add the new CPU Profile test, the first in this suite to offer a subjective measurement of processor performance. In this article we are going to teach you how to use this benchmark that measures the performance of your CPU , how it works and how to interpret the results.

Until now, 3DMark was the benchmark software for measuring PC graphics card performance; However, now they have added this new benchmark called CPU Profile that serves for the first time to measure the performance of the processor in the same application, although we must bear in mind that as with the results of the benchmarks for GPU, the results that we are going to obtain they will give us a subjective and arbitrary score, that is, no magnitude will be measured but a score will be assigned according to performance.

How to install CPU Profile in 3DMark 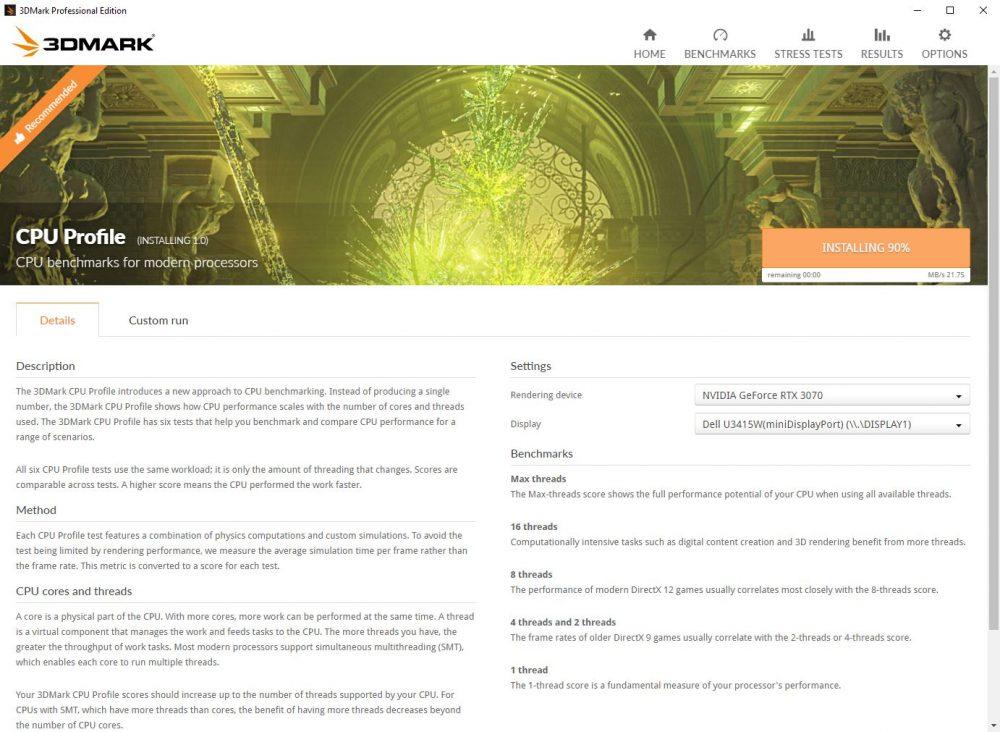 3DMark has a free version and several paid versions with different benchmarks available in one and the other, and is available both through Steam and independently. CPU Profile is available in the Advanced and Professional versions, and therefore it is not included in the benchmarks pack of its free version, so if you want to be able to use it you must buy the application (which is usually on sale for 3 or 4 euros frequently ).

That said, to access the installation of this benchmark you just have to go to the Benchmarks section in the upper right, where we can access this test and if we do not have it installed, we will be offered to do it simply by pressing a button. The test only occupies 21 MB and only takes a few seconds to install, although obviously this will depend on the speed of your Internet connection.

How does this benchmark for CPU work? 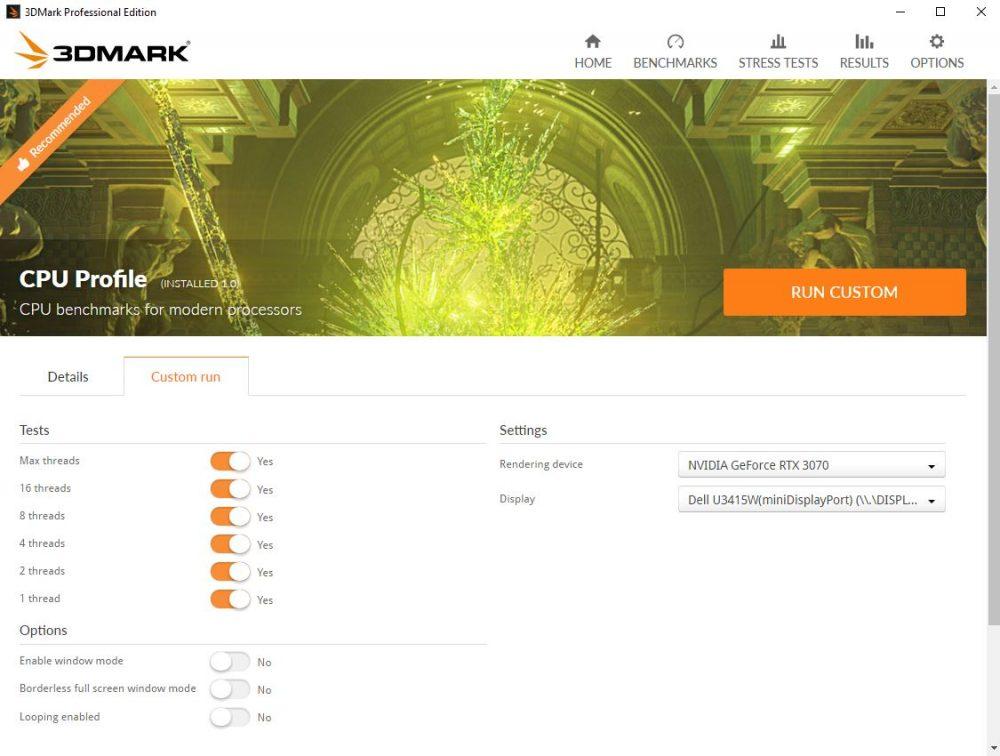 3DMark’s CPU Profile benchmark introduces a new approach to CPU benchmarking. Instead of producing a single number, this benchmark shows us how processor performance scales as the number of cores and threads used changes. CPU Profile has six tests in total, each of which uses a different number of threads; the benchmark begins using the maximum number of threads your CPU has available, and then repeats using 16, 8, 4, 2 and ends with a single-threaded test.

These six tests are run one after the other (although as you can see in the screenshot above we can deactivate the ones we want if we select the “Custom run” tab) and the results can be compared with other results of the same processor model that you have. . This is therefore a great way to check if your CPU is delivering the performance it should, and for overclockers it also shows the CPU’s overclocking potential and a way to measure performance gains by OCing it.

In addition, a monitoring graph is shown at the end in which you can see how the CPU operating frequency and the temperature have been changing while the successive tests were running. 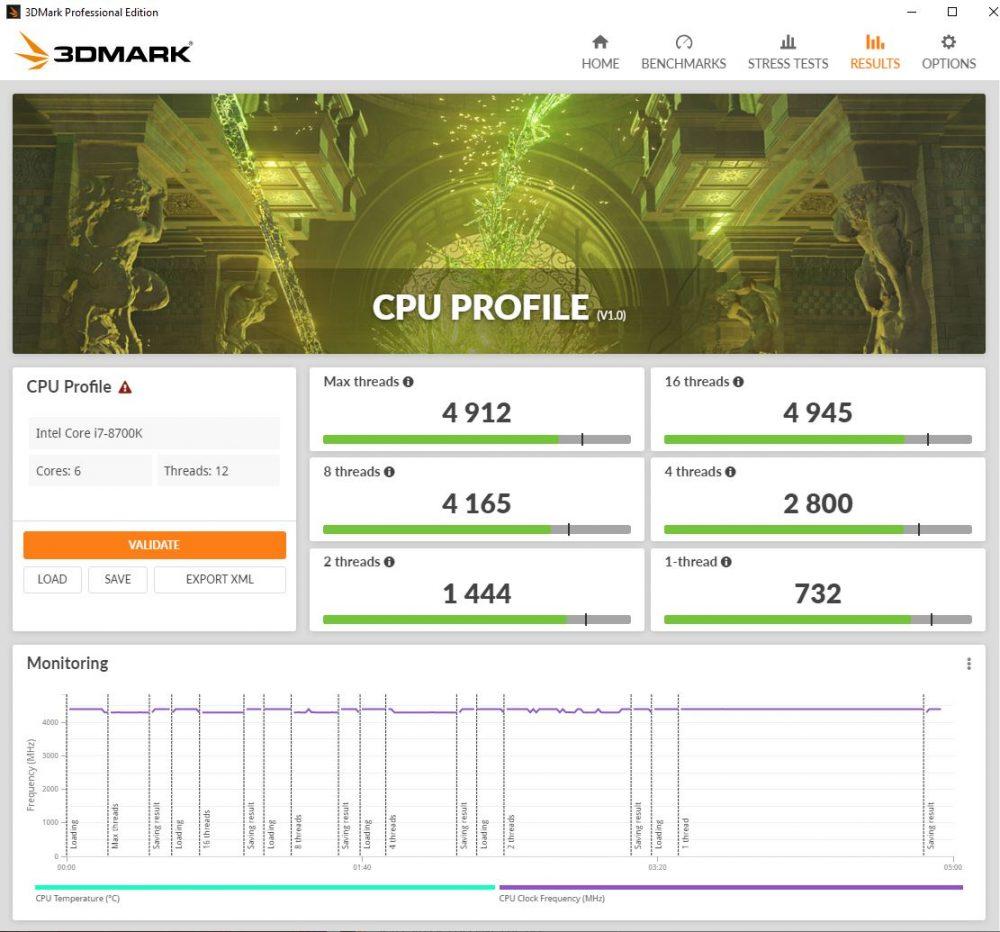 As we said, the score obtained is completely arbitrary but it still serves to compare your result with that of other CPUs of the same model. For example, in our test with a Core i7-8700K the green bar shows the performance obtained, while the vertical black line in the horizontal bar shows the median of the results of the same CPU, showing that we are below (the benchmark is below). we run with dozens of background processes and open applications, so it is normal … it is advisable to run these benchmarks with the PC just turned on so that there are no other things consuming CPU resources). The gray color of the line shows the overclocking potential that we should have with this processor. 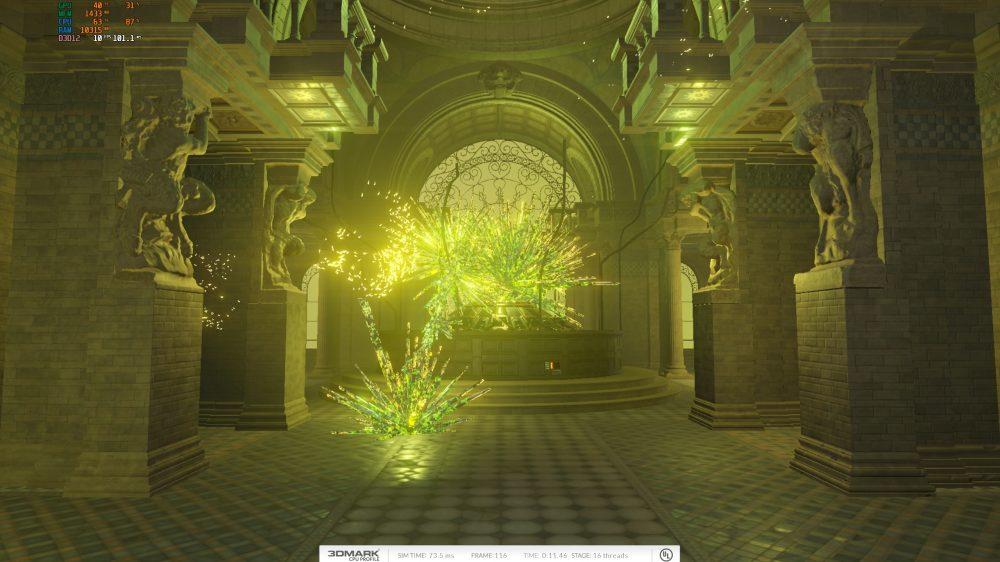 The trend in the design development of modern processors is towards an increasing number of process cores and threads, since more cores and threads means being able to perform a greater number of tasks simultaneously, which generally translates (although not always as this depends on the software being supported) in better raw performance. Concurrent multithreading (HyperThreading on Intel and SMT on AMD) allows each physical core to be capable of running multiple threads at the same time, so the more threads it has, the better performance too.

However, core counts seem to be increasing faster than the ability of applications to make use of them, which is why today there are programs and games that still do not benefit from the high amounts of threads that they have the most modern and powerful processors.

A modern CPU benchmark should demonstrate the benefits of having more cores and threads by scaling beyond 16 threads (for this reason the 3DMark test offers up to 16 threads directly, but is also capable of measuring performance with the maximum that your processor supports, whatever that maximum is). It should also show how a processor performs for games and other real-world activities where performance rarely extends beyond a modest number of cores and threads, and is that today 8 cores are practically the standard, and Going further is only within the reach of lucky pockets.

It is not possible to represent these two aspects of the performance of a processor with a single number, a different type of benchmarking is needed, and for this reason 3DMark offers these performance figures broken down into different performance levels, so that the performance can be compared. performance of the same CPU when using one, two, four, eight, sixteen and N processing threads (where N is the maximum that the processor supports, whatever that maximum is, as we have mentioned before).