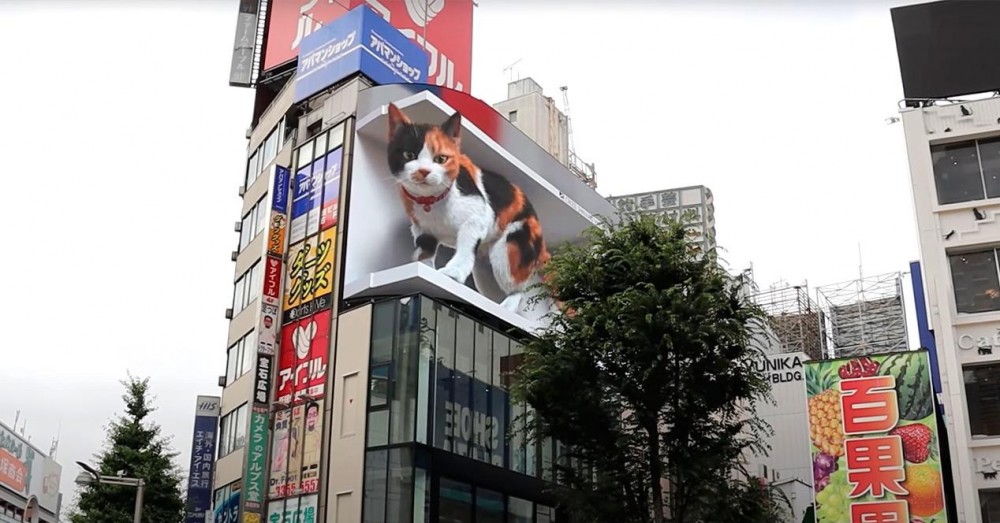 Surely you have already seen something similar to what we bring you today. It is a digital advertising screen that, placed in the corner of a building, produces a three-dimensional effect that seems to have a life of its own. A few months ago we saw a great giant gola, and even a cyclops that seemed to go outside, but now we come across this friendly kitten that seems to want to jump into the streets.

How do these screens work?

The intention of these screens is obviously to capture as much attention as possible, as it is inevitable to look at the screens to enjoy the fantastic three-dimensional effect they offer. Behind this effect is a clever advertising campaign, but leaving that aside, what really matters to us is the technology behind it, which is not small. And, have you taken into account the incredible resolution offered by these panels?

To achieve this, they have used screens with a very high resolution close to 4K. As you can see, there is no type of visual line that allows differentiating the different panels that make up the large screen, so the feeling of realism is even greater.

The key is that the screen must be placed in the corner of a building, and the angle of the corner must be 90 degrees to achieve the effect of depth (the screen can have a curvature if the design requires it). In addition, the viewer must be placed in a strategic place to enjoy the effect, otherwise, if it is placed in a different place, you will only see a strange distorted image that is not attractive at all.

You can see it live

As if that were not enough, taking into account that it will be difficult to see this kitten live simply because of having to go to Tokyo, the company behind the idea has posted a live video so that you can see the little feline at all times contemplating the crosswalk.

Of course, the screen has a set schedule, so if it is too late, you will most likely find it turned off during the Japanese night, so you will have to wait a few hours until the kitten reappears. What you will have to keep in mind is that the perspective offered by the live camera does not show the three-dimensional effect, so it will never be comparable to the views in person through the streets of Tokyo, since the only thing you will see is an image very uptight without much sense.

Not the first ad in 3D

This type of screen has appeared in other places on the planet, however, it is the first time that one of this type has landed in Japan. This one in question is placed at the exit of Shinjuku station, but previously others became popular in Taiwan and Seoul. Next, you will see these two models: