If we are passionate about cinema and series and we like to enjoy it with the best image and sound quality, it is likely that we have them on Blu-Ray, to be able to play them on our favorite player or console. But if we want to enjoy them on other devices such as mobile phones, tablets or computers, we will need to convert our Blu-Ray disc to another compatible format. For this, we can use a program like VSO Blu-ray Converter, a complete application with which we will have no problems converting our Blu-Ray to any format. What is and what is VSO Blu-ray Converter

VSO Blu-Ray Converter is a tool with which we can transfer your high definition movies and series from a Blu-Ray to a large number of formats so that we can view them on any other compatible device. In this way we can select if we want to pass all the content or only some parts, being able to choose only the movie, the extra content, the subtitles and audio tracks.

With VSO Blu-ray Converter , we can convert our Blu-Ray to any format such as DVD, AVI, MKV, iPhone, Xbox, PS3 and Android, being compatible with video encoders MPEG2, MPEG4, H264, Xvid, WebM, M2TS and 1080p . It has multiple Audio output modes such as stereo, multi-channel, AC3, DTS, AAC and Mp2, which we can preview at the moment with a selection of audio tracks and subtitles.

It is a program that is aimed at all types of users, from beginners to the most expert. When using VSO Blu-Ray Converter, the files resulting from the conversion are shown divided into main movie, extras or episodes instead of resorting to a list of m2ts files. We will also have Special Settings for advanced users, so that they can get the most out of the application.

With this powerful tool we will have special features such as:

Convert easily with just a couple of steps

Making a recording of our Blu-ray disc in any format is very simple. We just have to run the program and its main menu will appear with a simple interface in Spanish. We only have to click on the corresponding icon to load our Blu-ray disc. The next step will be to select what type of shape we want to convert it to. We have the menu at the bottom left. From there we can select any format with its different encoding. Finally, we must click on Start so that the recording and conversion of the Blu-ray disc to the format that we have chosen in a comfortable and simple way begins. 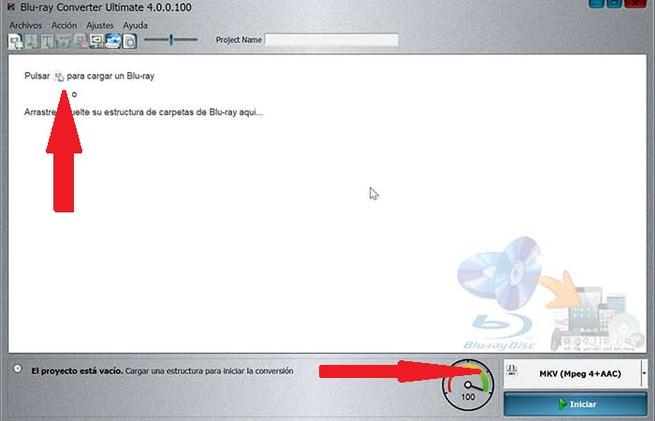 VSO Blu-ray Converter has a free trial version that we can download from its website . The paid version can be purchased for 22.55 euros and it has free updates for a year. Additionally, it is possible to acquire lifetime updates, to always have it updated, for a total price of 49.58 euros.

VSO Blu-ray Converter is an excellent application with which we can transfer our Blu-ray discs to other formats, but we can also choose other alternatives such as:

MakeMKV: is a tool that will allow us to transfer Blu-ray DVD discs to MKV to be able to view them on any compatible device such as a computer or television. It is compatible with both Windows and Mac OS operating systems and can be downloaded for free from here .

Handbrake : it is a free and open source multiplatform video converter that will allow us to transfer our Blu-ray discs to other formats such as MP4 that is compatible with most mobile devices. You can download it from this link .

DVDFab Blu-ray Ripper : is a software that allows the extraction of Blu-ray with all its functions in other formats including H.265 videos. This tool has a cost of $ 64.9 and has a free version that we can download from its website .