If you want to improve the coverage of your computer, we can bet on systems such as repeaters or WiFi Mesh networks, but we can also use a USB WiFi antenna that allows us to connect to any nearby WiFi network, whether at home or outside it, through the laptop we can improve coverage to search for nearby wireless networks. But, what are USB WiFi antennas and what should we take into account when buying one? What models are recommended and for what?

In the next paragraphs we explain what we should take into account when buying a USB WiFi antenna or if you really should do it depending on the need you have or the uses you are going to give this device that promises to improve coverage but will also provide of compatibility with wireless networks to devices that do not have it, such as your Smart TV. What is a USB WiFi antenna and uses

As its name suggests, a USB WiFi antenna is an antenna with a USB port that allows us to plug it into any device in order to connect to a nearby wireless network. For example, if you have a laptop and the signal does not arrive correctly, you can have an antenna connected to the device’s USB port so that it can better receive the signal from the router through it. It works in a similar way to a WiFi repeater but with the opposite function: what the antenna does is attract the signal from the wireless network so that it reaches your computer properly.

Its shape or design may vary but it is generally a USB port with an antenna that we connect to the computer or to another device, such as a Smart TV, and that works as a WiFi receiver to improve the signal that reaches us and avoid cuts or improve the speed with which we surf the Internet, for example.

You may want a USB WiFi antenna to improve the signal reaching your computer if you don’t want to use a WiFi repeater or booster or a WiFi Mesh network. But we must also take into account that there are USB WiFi adapters that have a pendrive format and whose mission is similar: what we do is provide a wireless connection to a device that does not have it. As you can do on your computer through a Bluetooth USB adapter if you want to connect a keyboard or headphones, for example, we can do the same with the WiFi connection of a device. What a WiFi USB stick allows is to connect any device to the Internet through the wireless signal , even if it does not have it by default.

What is it for? Frequent uses

The best use we can give to a USB WiFi antenna is, as we have explained in previous paragraphs, to improve the coverage of our computer if we are far from the router or if the distribution of our house means that it does not arrive correctly. Although it will always be more advisable or useful to bet on other systems such as WiFi repeaters or amplifiers or a WiFi Mesh system, for example, it can be an alternative to connect to the signal more easily.

Another option is that we want to use it outside the home, where we do not have “control” of WiFi coverage through improvements such as the previous ones. For example, if you take your computer to university but the coverage in your class or in the library is usually insufficient… Having this type of USB antenna will allow you to connect with better coverage from your laptop and without complications.

It can also be useful if you want to connect to open WiFi networks , which is not recommended for computer security if you do not use a VPN, and you want to be able to connect easily and have free Internet anywhere. Whether it is a hotel, a library, a coffee shop or on public transport such as trains, etc. What to look for and which one to buy

There are a number of aspects that we should look at when choosing a USB WiFi antenna correctly, such as, for example, what technologies the device we just bought is compatible with. We must also take into account the generation of the USB port to which we are going to connect it, but also other relevant factors such as the quality of the antenna (because it is not bigger, it will be better) or the size or design depending on where we want to take it or connect it.

If you are looking for a simple antenna, the TP-Link Archer T3U Plus model is a dual WiFi adapter with an adjustable external antenna compatible with Windows computers and computers with the MacOS operating system. It promises a speed of up to 867 Mbps in the 5 GHz band and up to 400 Mbps in the 2.4 GHz band, as well as other improvements or technologies such as MU-MIMO to manage the entire network…

It is small, compact and we simply have to connect it to a USB port with a user interface that promises to be very simple. In addition, it offers the WPA/WPA2 encryption standard that keeps wireless connections secure and is compatible with Windows in its versions of Windows 10, Windows 8.1 or Windows 8 and Windows 7 as well as computers running macOS. With a different format from the previous one, here we do not have a USB WiFi antenna that connects automatically to the computer port, but rather we have the option of connecting it directly to the device’s USB port, but it also has a support that allows us to place it on the table or on any surface to get a long range. It is a USB 3.0 compatible with Windows in all its recent versions and also compatible with computers that work with macOS.

It allows you to use it for HD streaming without interruptions or for video games and promises up to 867 Mbps in the 5 GHz band or 300 Mbps in 2.4 GHz and has 65 centimeters of cable with a flexible design so we can connect it to the computer finding the best possible location for improve Internet coverage. 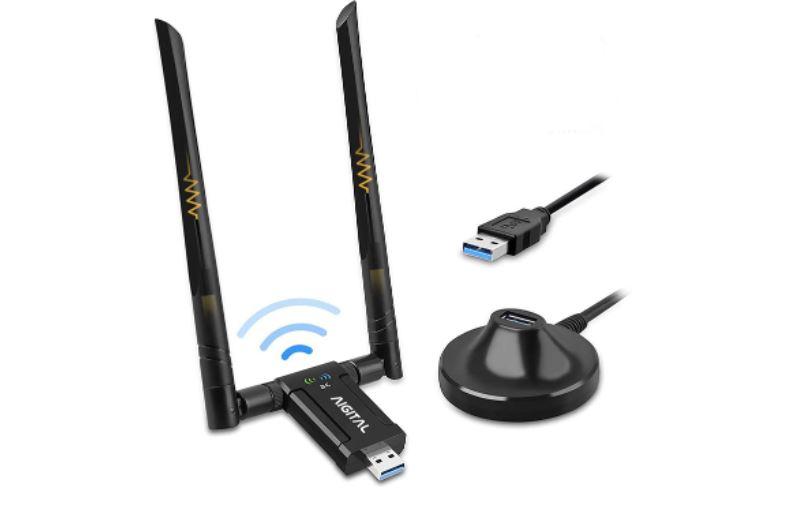 One of the best antennas that we can find on Amazon is this TP-LINK desktop model . A USB antenna that we can connect through the cable and that does not work as an antenna directly to the computer port but with a cable that allows us to place it anywhere to achieve the best coverage. We can rotate and adjust the antennas at different angles to favor better reception and it is compatible with Windows 10, Windows 8.1, Windows 8, Windows 7 computers and with computers with the macOS operating system.

With a high-speed USB 3.0 port and Dual Band Wi-Fi, it is not a USB Wi-Fi antenna but rather has two dual gain dual antennas with promised speeds of 1,300 mBps and with support for the 802.11ac Wi-Fi standard. In addition, it is an antenna with quick configuration and advanced security, compatible with WPA/WPA2 encryption standards to protect the wireless connection.