If you’ve ever been interested in Linux, you’ve surely been through Ubuntu. This is the most popular and most used Linux distribution in the world. It maintains a perfect balance between performance, stability and ease, which makes it very accessible to all types of users. This distro is usually updated twice a year, once in April and once in October. And, after the arrival of 20.10 last year, the next update that we will see of this Linux will be Ubuntu 21.04 . An update that, in addition, will come with very important changes.

Before continuing, we remind you that Ubuntu 21.04 is going to be an update with normal support, that is, 9 months. If we are using version 20.04 of this operating system, the latest LTS, we recommend that you do not update in order to take better advantage of the 5-year extended support offered by this version. If we are one of those who want to always be up to date, we do not mind updating every 9 months and having all the news under control from minute zero, then discover everything that the next Ubuntu 21.04 will bring. 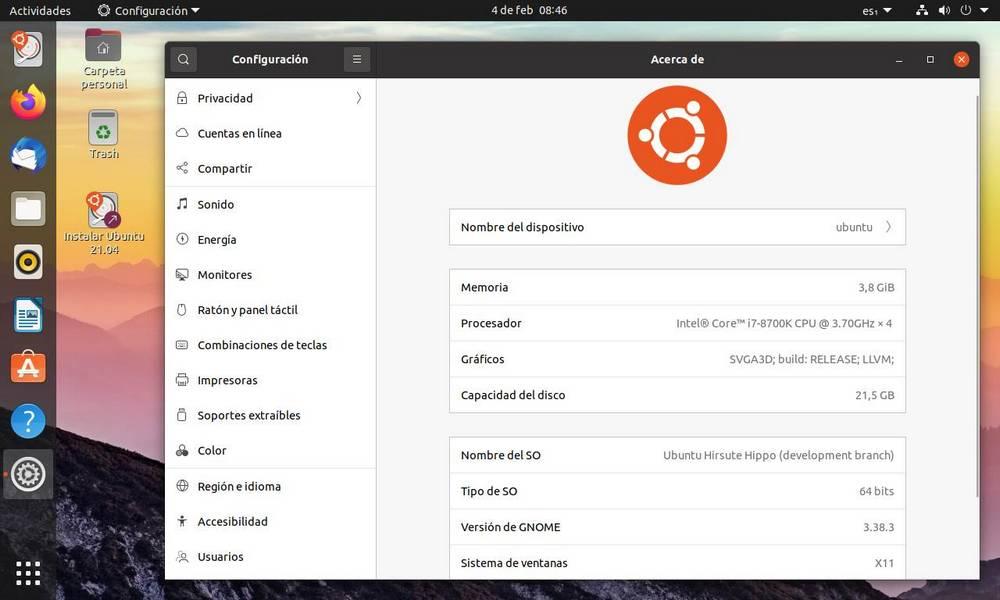 There have been two major disappointments with the release of this new version. The first one is that we will not have GNOME 40 , so we will still have to wait (quite a bit) before we can test the big changes included in this version. And the second of the disappointments is the absence of GTK4 . Both changes are delayed, for now, until 21.10.

The first of the really important changes that we will find is related to Linux permissions . As we anticipated a few weeks ago, Ubuntu 21.04 will make the folders private by default. Instead of allowing everyone to read other users’ folders by default, from now on these will be limited, greatly improving the security of all Linux installations, especially those that do not use encryption systems.

Ubuntu 21.04 will also be the first version of this distro to use Wayland by default . Xorg will continue to be present on the distro (for now), and will be used on systems with NVIDIA graphics. It is expected that little by little the Wayland integration will improve and for the next LTS (22.04) everyone can use this graphical server without problems.

Although Canonical can introduce last minute changes to the Kernel until April 8, 2021, everything indicates that Ubuntu 21.04 will use the Linux 5.11 Kernel . Python 3.9 will come installed and configured by default, support for ZFS drives will be improved, and all applications included in this distro will be updated to their most modern versions. Of course, Hirsute Hippo will also bring a new wallpaper , as usual, although it is not yet known what it will be.

There are also rumors of a new, more modern and simple installation wizard. However, this installer will not arrive until the next version of the distro, Ubuntu 21.10. This version 21.04 will use the same installer as always, but it will be the last to use it.

At this time, this new version of Ubuntu can only be tested through daily distro builds. Its development is still open, so although it is complicated, we will still be able to see some last minute changes in the system before the closure of features.

On February 25, Canonical will close the development of this version of Ubuntu and will begin the debugging phase. On April 1, 2021, the most adventurous users will be able to download the first beta of this new version. This will already be quite debugged and it should receive minor changes before the final version.

If all goes well, Ubuntu 21.04 will be available to everyone on April 15, 2021 . Users can download the final ISO to install it from scratch, or they can decide if they want to update Ubuntu from the distro itself with the package manager included in it.